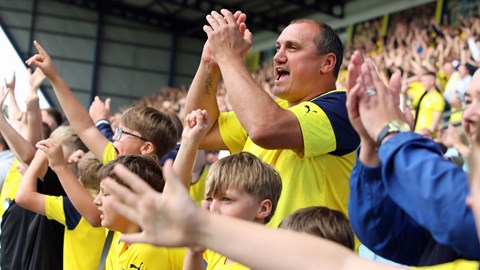 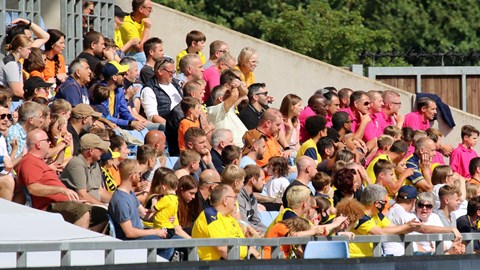 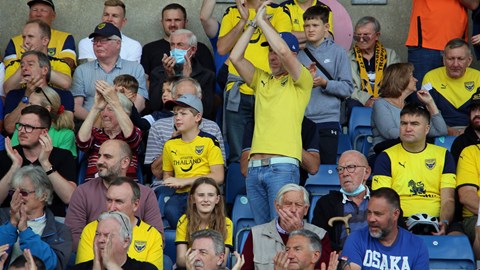 Parking
The stadium has unreserved spaces for around 2,000 cars at each game. Parking is free of charge and on a first come, first served basis. For big games the main car park does get full before kick off although there is generally still space in the overflow parking at the back of the Vue Cinema just past the club shop.

At each game a fence is put up behind the North Stand which means that supporters cannot walk from one end of the ground to the other, therefore please park at the correct end of the ground

The Yellow Car Park behind the East Stand opens at midday for Saturday matches and a steward will guide fans to a parking place. Once the car park is full the club will tweet this fact (@OUFCOfficial)  to allow supporters to make other arrangements. 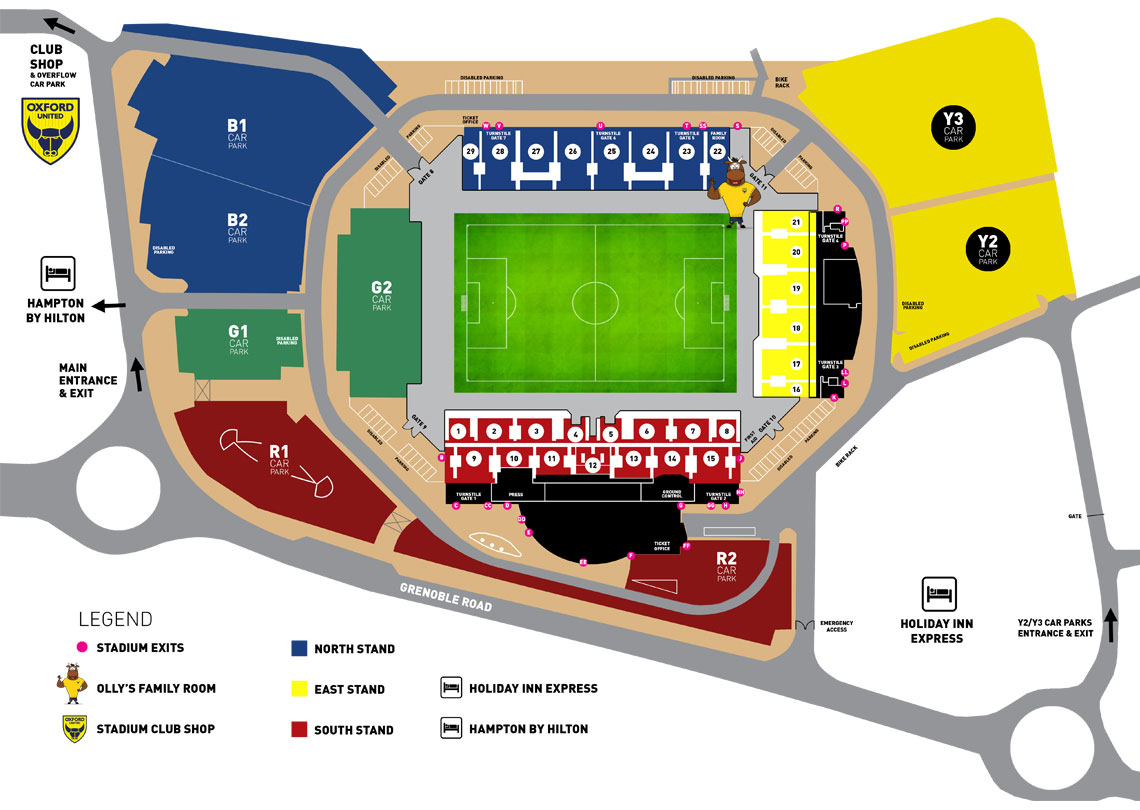 Disabled Supporters
There are specific marked bays for disabled supporters near to each stand. Click HERE for full information for supporters with disabilities or call 01865 337533.

Parking Near the Ground
There is some road parking near the ground with spaces between the stadium and the Watlington Road roundabout. All supporters attending games are asked to respect the Residents Only schemes that operate in the nearby streets and not to park on the double yellow lines on approach roads. The lines do include the grass verges along the edge of the road as well and the club will not accept responsibility for any parking tickets issued to motorists who park there.

The Royal British Legion at Littlemore (Littlemore, Oxford, OX4 4LZ) is available for parking for patrons using the facility.

BY TRAIN
Oxford Station is roughly four miles from the stadium.

Stagecoach route 1 and The Oxford Bus Company route City 5 run at frequent intervals (every 4-10 minutes combined) from the station to Knights Road, a five-minute walk to the ground.

Oxford Plus Bus tickets are valid on both routes. Return or 24 hour passes bought from the driver on route 1 can be used to travel back to the station on the City 5 and vice versa.

Taxis will take around 15 minutes to get to the ground from the rank outside the station.

BY BUS
Direct to the Ground from Oxford city centre and Iffley Road (Saturday and Good Friday games: 3A Bus Route from Oxford Bus Company and Stagecoach

Two buses per hour operate from Oxford city centre to the stadium on Saturdays and most Bank Holidays.

Return or 24 hour passes bought from the driver on one company can be used to travel back from the ground on the other. For midweek games the 3A stops at the Science Park close to the stadium but please note is not available for the return journey.

Stopping a short walk from the ground

From rail station, city centre, Cowley Road and Cowley Centre to Knights Road (5 minutes walk):
Stagecoach route 1 and the Oxford Bus Company City 5 route run from Oxford Station through the City Centre to Knights Road which is a five-minute walk to the stadium. In the city centre buses pick up at the Westgate shopping centre (stop M1), Speedwell Street, St Aldates (stop G5) and High Street, Queens Lane (stop K1). Buses will show Blackbird Leys as the destination on the front.

Return or 24 hour passes bought from the driver on one company can be used to travel back from the ground on the other.

Please note that these services are not operated by the club and are subject to change: please check the relevant bus company website before setting off.

The OX2, OX3 and OX7 services are operated by Thames Travel and bring fans to United home games closer to kick-off times, while continuing to pick up and drop off at the regular points.

The OX2 starts at Didcot and picks up in Steventon, Drayton and Abingdon. The OX3 starts at Carterton and then picks up at Brize Norton, Witney, Eynsham and Botley, while the OX7 picks up at various stops in Kidlington as well as along the Banbury Road, Marston and Headington. Double-decker buses run for all league matches (Saturdays only for the OX2) with cup games decided on an individual basis.

For timetables and fares:

(Timings subject to variation in the event of a change of kick-off time. Buses run for all league matches only. Cup games will be decided on a match-by-match basis)