TEAM NEWS
United are without top scorer James Henry who felt a reaction after returning to the side on Saturday after a thigh injury. Karl Robinson is hoping that Henry will be fit again for Saturday's Sky Bet League 1 game at Peterborough but has options in that position with Jamie Hanson, George Thorne and Liam Kelly all fit again.

Further forward Dan Agyei returns to the squad in place of Henry while Matty Taylor was on the bench for Saturday's win over Blackpool.

See Karl Robinson and Alex Gorrin looking ahead to the game in iFollow right now.

THE OPPOSITION
Steve Bruce has signed Danny Rose and Valentino Lazaro since the first game but neither are eligible for the replay since they were not available for the first match.

“We will slightly freshen us up" he told the press yesterday. “The two lads that made their debuts on Saturday, Danny Rose and Valentino Lazaro, can’t play. Unfortunately they weren’t signed before the first game, which is annoying because it would have been an ideal game for them.
“Oxford are a decent side. They have lost two of their players to Brentford so that will hinder them I’m sure but they are a good side. It’s live on the TV and they’ll want the underdogs to turn us over, so we have to be wary of that.
“If we can go and get to the Fifth Round this week and be on 31 points, I think we’d have accepted that, no matter how we got there."
TICKETS

A handful of tickets remain, but only individual seats rather than two together. Normal League prices apply for this fixture with no discount for members and tickets go off sale at 3pm. There will be none available on the night
Remaining tickets are available in person and over the telephone (01865 337533) or online at oufctickets.co.uk
Cup tickets are not available from the shop in the Covered Market. 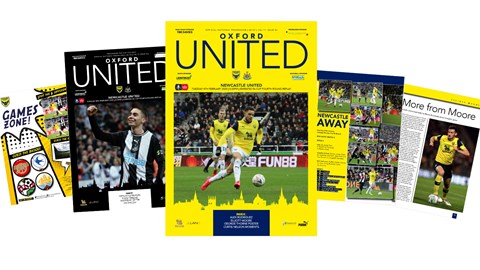 GETTING HERE
With traffic expected to be heavy on approaches to the stadium and parking in the vicinity full early, the club has organised a park and ride facility from Unipart, Garsington Road.
There are a limited number of tickets to use this service which must be purchased in advance and these are priced at £3 (£1.50 for Under 16s) and are available online CLICK HERE and from the ticket office.
The first bus departs from Unipart at 5.45pm and then every 12 minutes until 7.45pm with buses returning from Knights Road after the final whistle until 10.46pm. This will be later in the event of the match going to extra time or penalties.
Football Special Buses
The OX3 football special bus will be operating from Carterton, Brize Norton, Witney, Eynsham and Botley. There is an additional bus running on this route.
The OX2 is NOT running though since it is not licensed with the traffic commissioners for evening matches
The OX7 from Kidlington, Summertown, Marston and Headington will also operate.
Bus departure times are the same as for a 7.45pm kick-off even though the actual kick off is later.
Full details are HERE
FAMILY
The Family Room is open for this game with player visits and we have a full Family Guide to games available here: OUFCFamily.pdf
SENSORY ROOM
We are proud to have a bespoke Sensory Room for fans under 23 who maybe need to take a little time out on a matchday with our fully trained helpers. Just ask a steward if you would like to use it or email Supporter Liaison Officer Kath Faulkner for more details: kfaulkner@oufc.co.uk
PARKING
There are circa 2,000 free parking spaces at the stadium but with another big crowd expected we ask everyone to arrive early and park legally
Away fans-  Please park in the West car park - the one closest to the cinema and bowling complex at the fence end of the ground.
The pedestrian crossing  point by Vue cinema will be managed time to enable a safe and manageable crossing for supporters as well as the flow of cars. We kindly ask for your assistance in co operating with staff in enabling us to facilitate this trial would be appreciated.
AWAY GUIDE
If you are a Newcastle fan travelling to the game then a full Supporters Guide is available here: OUFCAwayDayInfo.pdf
CLUB SHOP
The Club Shop is open and has everything to help you show your true colours tonight. Pop in before the game and help us turn the stadium yellow and blue.
COVERAGE
You can follow the whole game on twitter through @OUFCOfficial or on our Instagram page or here in our Match Centre, and of course the game is live on BBC 1 with kick off at 8.05