TEAM NEWS
'There's only two Jack Stevens' for the U's tonight. Goalkeeper Jack stands by to play in goal with Simon Eastwood ruled out with a knee injury, and he will be joined in the squad by namesake midfielder Jack Stevens.

Jack is a talented forward or midfield player who has been part of the under 18 side for the last two years and has been a regular scorer this season. He joins Fabio Lopes and Nico Jones in the senior squad tonight and will wear number 44. For identification purposes one will be in green, one will be in yellow!

Jamie Mackie returns to the club where he first made his name and Jamie Hanson comes back into the squad for the first time after a hamstring problem while under 23 keeper Max Harris will be on the bench.

There is a familiar face at Exeter these days in striker Alex Fisher, yet another product of the successful Oxford United Academy programme and once a teammate of Matty Taylor at the Kassam Stadium
“I had had a taste with it at Oxford and it was a shame that it didn’t quite work out for me there” he said. Alex actually made his Oxford debut away at Exeter in 2008 and following successful spells abroad it was then back to the UK where he has played for Mansfield Town, Torquay United, Inverness Caledonian Thistle, Motherwell and Yeovil. “When I heard that the manager (Matt Taylor) was interested, I said straight away that it was something I would like to have further discussions about” he said “I think the facilities we have got here, you are not going to see anywhere in League Two.”
TICKETS
Fans can pay on the night and prices for this game are as follows (seated only)
Adult: £10
Senior/student: £8
Under-18s: £3
The London Road Club recognises that six away games in a row has been tough for the Yellow Army and so prices have been reduced for this game:
Depart Stadium 13:45pm
Adult Member                     £11:00
Adult Non Member              £13:00
Under 18 Member               £9:00
Under 18 Non Member        £11:00
Call 01865 337533 to book.
Under 14s must be accompanied by an adult and no alchohol is permitted on the coaches
iFOLLOW
You can see the whole game in iFollow tonight for just £10, whether you are in the UK or abroad. Full details are available right HERE

THE PLAYLIST
Want to get in the mood for the game? Then search for Oxford United Official on Spotify where we bring you a new playlist for every away journey, plus the dressing room playlist. The Playlist is available at journey time and is always flexible: let us know on Twitter if you have any more to add to help get the Yellow Army in the mood as we head for Exeter. 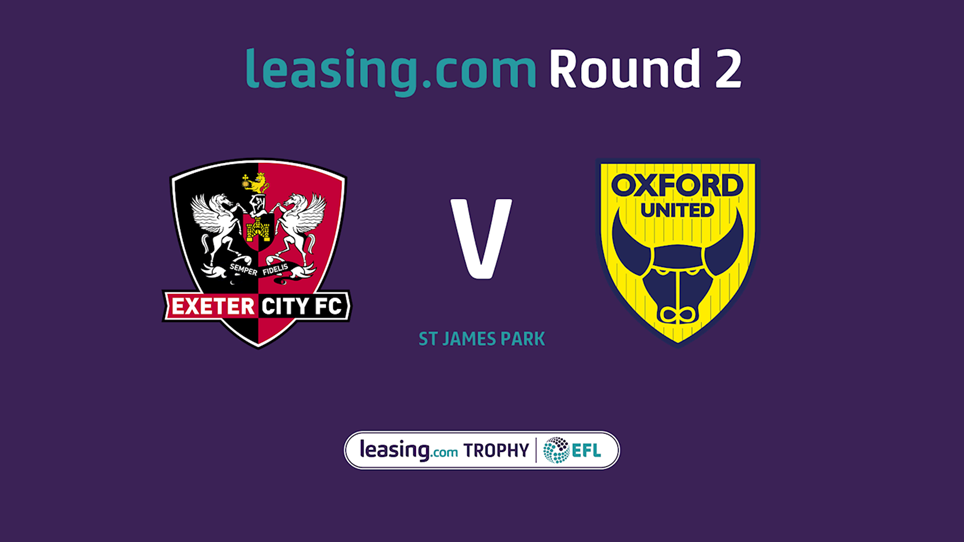 
Oxford United  are in Leasing.com Trophy action away at Exeter City on Wednesday,  with a 7pm kick off.

Oxford United were beaten on penalties in the Leasing.com Trophy tonight. With the sides locked at 0-0 after 90 minutes, it was left to a nailbiting penalty shoot-out which saw United unable to beat the keeper with their first three efforts to exit the competition.

Having qualified for the knock out stages from a group that included Portsmouth, Crawley and Norwich, the U’s once again named a strong side and wingers Rob Hall and Dan Agyei both had early shots at goal before Jamie Mackie rattled the bar with a fierce 12th-minute effort that keeper Dino Visser hardly even saw but managed to palm it away. It was the closest we were to come to a goal in ordinary time.
The home side closed down the U’s and played some bright football without really testing Jack Stevens in the United goal, despite one or two dangerous crosses which Elliott Moore did well to clear before Stevens showed what a good keeper he is with a smart save from Matt Jay after 24 minutes after Jay had weaved his way into the box. Joel Randall should have done better with the rebound but couldn’t get the ball past a sea of covering bodies as United held firm.
The inventive Anthony Forde drilled a 27th-minute effort just wide, Hall failed to win Goal of the Season by shooting tamely wide after lobbing the ball delicately over two defenders to engineer some space and then Agyei forced Visser into a good save after a smart turn on the edge of the box. It was fairly even though, with Stevens making a good save from Jay to ensure that the scores were level at the break.
Temperatures started to plunge and the teams kept going at each other with decent tempo after the interval, without either keeper being unduly troubled. Indeed, Stevens didn't have a true save to make in the entire second half, a tame injury-time effort aside, as United became the side more likely to find a goal.
They never quite made it. Agyei was just unable to free Hall with one early effort and then headed a Ruffels cross over the bar on 56, but there wasn't that vital spark or moment of invention inside either box. Forde almost provided it with a dipping volley after 71 minutes and the return of Jamie Hanson after injury coincided with a renewed energy as United tried to force the pace late on - Alex Gorrin moving further forward and looking full of running in a free role.
Exeter stood strong though to take the game to a penalty shoot-out. United are not great in penalty shoot outs against Exeter. Forde saw the first one saved by Visser, Jay made it 1-0. Hall was also denied by Visser and Sweeney toddled forward to make it 2-0. Sykes became the third player unable to beat the keeper and Ben Seymour fired home to earn the Grecians a win.
Not a classic and United move on to league action at home to Shrewsbury on Saturday.
See you there
Att: 483
Away: 130
Report by Chris Williams, pictures by Steve Daniels


Oxford United  are in Leasing.com Trophy action away at Exeter City on Wednesday,  with a 7pm kick off.