Oxford United welcome Tottenham Hotspur under 21s to Grenoble Road this evening as the Checkatrade Trophy enters the knockout stages.

Team News
The U's are likely to give game time to a number of players who have been on the bench recently with Tony McMahon likely to come back into the side at right-back after a rib injury and Luke Garbutt stepping up at left-back. Ricky Holmes could start after being on the bench for the last two games while youngsters Aaron Heap and Armani Little step up in to the squad from the under 23s.

The Opposition
Spurs' youngsters are a hugely talented group and Oliver Skipp made his first Premier League start at the weekend after stepping up from the youth system. Jack Roles is an attacking midfielder who has caught the eye while Tashan Oakley-Boothe is an under 17 World Cup winner with England

Tickets
Prices for tonight's game are reduced to

Season ticket holders seats are NOT reserved but tickets can be bought  online from  oufctickets.co.uk and by calling 01865 337533 as well as from the Ticket ofice tonight

The gate behind the North Stand WILL be in operation tonight, meaning that fans cannot move from one end of the ground to the other behind that stand. All car parks are open.

For a full guide to transport options, parking and buses CLICK HERE although please note that the football special buses aren't running tonight.

Neither the Family Room or Sensory Room are open.

Away Fans
If you are a Spurs fan travelling to the game then a full Supporters Guide is available here: OUFCAwayDayInfo.pdf

Polythene UK 50/Fifty Draw
There will be no 50/Fifty draw tonight but don't forget that it is the last day to buy a ticket for Boxing Day where you can win a trip to Thailand...

Coverage
iFollow is available with the full game LIVE in the UK, Ireland and overseas .There will be reaction from the key men after the game, and you can follow all the action on Twitter at @OUFCOfficial and on this site with our OUFC Live coverage. 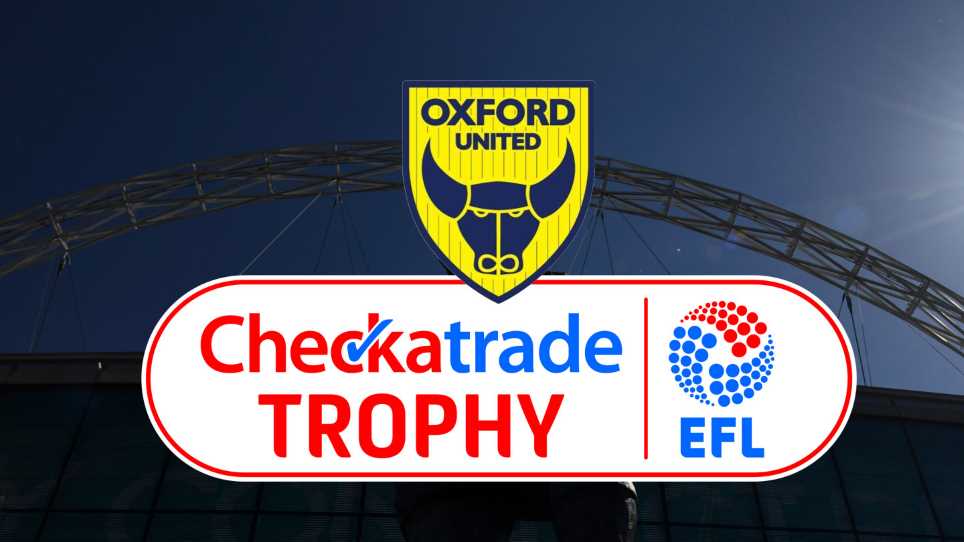 
A reminder that Oxford United's home game against Tottenham Hotspur Under 21s in the Checkatrade Trophy takes place on Tuesday December 18th (7.45pm) and the winners now know who they will face.

Oxford United's impressive form continued with a comprehensive 3-0 win over Spurs in the Checkatrade Trophy this evening. Goals from Charlie Raglan, Sam Smith and Tony McMahon eased the U's past a talented young Spurs side and sent United through to face Cheltenham Town in the next round.

United made much of the running - or maybe DID much of the running - at the start as a fast-moving Spurs side knocked the ball around and showed fantastic technique in the early stages, but almost all of it was in their own half as United pressed them all over the park and gradually got on top.

The U’s certainly had the two best chances in the opening exchanges; McMahon sent a free kick into the side netting and Smith headed over from a James Henry cross.

It didn’t take long for the opener to come along though. Twelve minutes on the clock and McMahon, whose delivery is always dangerous, floated a simple free kick towards the penalty spot. Raglan got up above his man like he wasn’t there and his header made it 1-0 just inside the right-hand post. Five minutes later and it was 2-0 with a similar goal. The principal difference was that it was an outswinging cross this time, delivered by Luke Garbutt and met by Smith who flicked home to make it 2-0 and highlight a key difference in approach: Pretty Football 0, Set Pieces 2.

Henry and Brannagan had good strikes from distance and United continued to close Spurs down quickly and limit their space, although they were grateful to captain Simon Eastwood who flew off his line to make an excellent save from Kazaiah Sterling after the forward broke free on the half-hour mark.

Had Spurs scored at that stage then who knows, they may have got fully back into the game, but United are more than capable of playing the ball around too and Armani Little on his full debut showed glimpses of what he can do with some great runs down the left as the Yellows dominated much of the first half without quite seeing Spurs off; the pace of Sterling always kept United on their toes.

The third goal came soon after the break and killed the game off. Again it was from a set piece, although Spurs cleared the first ball in this time. Whyte retrieved and crossed, Raglan dummied* and McMahon rifled the ball home for 3-0.

It became a training game after that. Jack Roles, Spurs best player on the night, was always inventive and dangerous but the game was all but over by the time we reached the hour mark. Marcus Browne almost marked his birthday with a goal, denied by a good save and a brave block, and there was a home debut for midfielder Aaron Heap to cap a good night all round and underline that talented young players are not the sole property of the Premier League.

Another excellent performance and United march on in three competitions. A trip to Cheltenham Town awaits in the next round. Who knows where this season is heading?


A reminder that Oxford United's home game against Tottenham Hotspur Under 21s in the Checkatrade Trophy takes place on Tuesday December 18th (7.45pm) and the winners now know who they will face.