Oxford United look to get off the mark when they welcome Accrington Stanley to the Kassam Stadium on Tuesday evening (7.45pm)

United will again be without Ricky Holmes, Simon Eastwood and Rob Hall  as they welcome Accrington. Holmes has been troubled by a back problem but should be avauilable against Burton on Saturday while Eastwood is unlikely to feature for around six weeks after a freak injury to his little finger, suffered in the warm up against Fleetwood in the first home game.

Hall underwent a scan on his knee late yesterday afternoon and the U's are hoping the results, due later today, aren't as bad as first feared.

James Henry and Jon Obika both caught the eye as subs at Portsmouth on Saturday and could be in line for a return to the starting XI while midfielder Jamie Hanson stands by for a home debut.

See Karl's thoughts on the game in iFollow

“I was pleased with the performance on Saturday but I don’t think you can ever be pleased with a draw at home, you want to win games,” he told the official Accrington website

“If we are going to be successful and try and mount a challenge for the play-offs, we have to win our home games and that means whoever comes here we should be beating.”

“That’s always the difficult games at the start of the season, teams who are scrapping for their first win, they are probably the most difficult opponents to overcome.But we have done our homework and will continue to show the players what we need to but we know it will be tough.

“We know though that when we get our game going, we can be a match for anyone. I know Karl well, after the game you have a chat and a laugh but you are serious when the game is on.

“He has had a good managerial career so far at such a young age and I am sure he will be turning them around soon.” 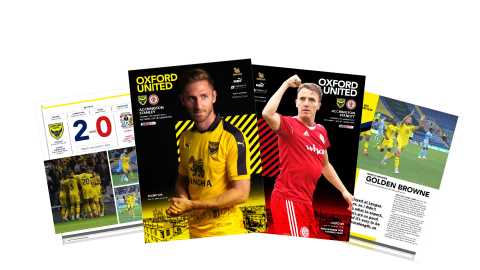 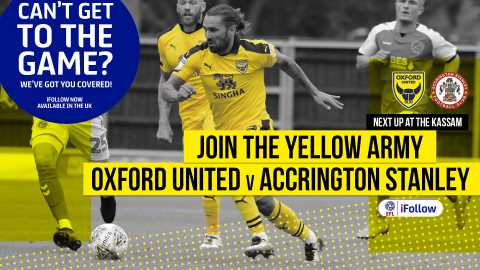 The Family Room is not open tonight

iFollow is back with full commentary on the game, thanks to our friends at BBC Oxford. Home or Away- you can see the whole game live...

Oxford United were beaten 3-2 at home by Accrington Stanley this evening despite twice holding the lead at the Kassam Stadium. Ahead through Gavin Whyte's fine strike, United were pegged back by a Ross Sykes goal and then after Marcus Browne had restored the lead Billy Kee struck twice to give Stanley the spoils and leave the U's still searching for that elusive first league win.

United will feel hard done by because there was far more attacking intent right from the start with the adventurous Cameron Norman almost marking his league debut in the best way possible, jinking past two defenders and crossing low in the first minute with the recalled Jon Obika just unable to steer it home at the near post. A variation on 4-4-2 simplified things for the U’s and with Whyte and Browne taking on defenders out wide and the crowd in full voice it was great to watch.

Defensively, only Curtis Nelson remained from the back five that started the season at Barnsley, but the changes looked stable enough even if a minor scramble in the box after 16 minutes and a missed header from Sykes in front of goal on 22 were reminders of the need for concentration.

United had still to score a goal after three games but after 28 minutes Whyte put that right with a cracker. Mousinho, restored to defence but always willing to come forward, started the move with Jamie Hanson urging him forward with a cry of ‘go on, I’m behind you’ as he filled the gap at the back. That allowed Mousinho to carry the ball and feed Henry who slipped it across the face of the box for Whyte in the right channel. It wasn’t really a clear chance but the Northern Irish winger made things look simple as he skipped forward and then unleashed a magnificent effort into the roof of the net from 25 yards, giving keeper Connor Ripley no chance.

United deserved their lead and in Whyte had the most dangerous player on the pitch- his low drive on 38 smashed against the right hand post with Ripley beaten and Accrington were seemingly on the ropes.

Sadly when your luck is out it is really out and on 42 minutes Accrington were level. Set piece on the right, swung towards the back post and centre-half Sykes acrobatically hooked it home under pressure from Norman. (I’d call it a bi-Sykes-al kick if I was in a better mood).

Would that damage frayed nerves? Frayed not. Attacking towards their own fans in the second half the U’s were determined to put things right and threw men forward to try and restore their lead. On 57 it was the excellent Browne who found a way. Always composed and looking to create something, the on-loan West Ham man ran at the Stanley defence and then curled a perfect right-footed effort beyond the reach of Ripley to make it 2-1.

Perhaps United needed to tighten up at that stage and hold onto that lead for a while but instead they went for a killer third goal, committing men to attack and leaving themselves open to the counter. Five minutes after going ahead they were pegged back once more. Kee challenged in the air and when the ball dropped kindly for him the always-dangerous striker let fly with an unstoppable effort for a well-taken first goal of the campaign.

It was good old-fashioned end-to-end stuff: Finley flashed one just wide on 72, Browne had a free kick beaten away on 74, sub Zanzala could only find the side netting from a tight angle on 76...

United could easily have won the game because a goal was coming at one end or the other, but when it did it was for the visitors. In the 78th minute Jordan Clark ran into the box and cut across Ruffels who clipped him and knocked him over. Kee made no mistake from the spot and United were about to lose their fourth game in a row.

In 2014/15 it took new boss Michael Appleton until his eighth league match to get his first win. That was against Accrington Stanley on a Tuesday night and things didn’t turn out too badly in the end, right?

This was a far better performance than in any previous league game this season, if that is any consolation, but United need to regroup and go again when they face Burton Albion at home on Saturday.