United boss Pep Clotet welcomes Curtis Nelson back into the squad after he was rested for the game at Port Vale on Friday. Clotet must decide whether Nelson or Aaron Martin replaces Mike Williamson who will be out for a week after hobbling off at half time at Vale Park. Gino van Kessel is a similar time away from a return from a hamstring injury.

Ricardinho has been training and should be available while Rob Hall will be hoping for a starting place against his former club. Hall was on the mark when the two sides drew 1-1 at Stadium MK earlier in the season. 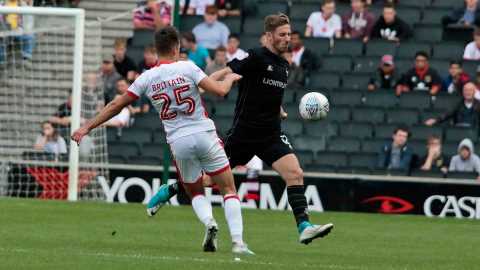 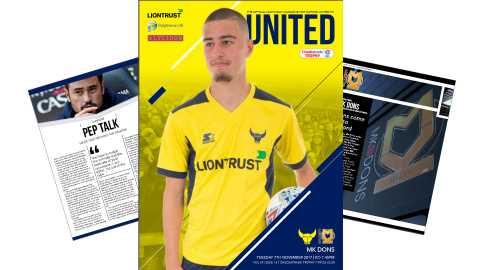 Tickets are on sale online at www.oufctickets.co.uk and from the ticket office in person and by phone (01865 337533). They are also on sale for this match from the  club shop in the centre of Oxford. The shop is part of the Market Barbers in the Covered Market; easily accessible from the High Street entrance. It is open Monday to Friday from 10am to 5pm and Saturdays, 10am to 4pm.

Should tonight's game end level after 90 minutes both teams will be awarded one point but there will be a penalty shootout with the winners gaining an extra point.

Remember, you can always get the programme online and read it on your phone, tablet or laptop. Each issue is available at matchdayfix.com/oufc/

Oxford United went through to the knockout stages of the Checkatrade Trophy despite a 4-3 defeat at home to MK Dons tonight. Two goals from Jack Payne in the first half and a Rob Hall strike in the second meant little at Grenoble Road as results elsewhere guaranteed the U's a place in the next round as runners up in Group G.

On a foul night of persistent rain there was plenty of entertainment, even if a crowd of only just above 1,000 meant it was played without too much of an atmosphere. Those who did attend enjoyed a terrific game. The first 45 minutes in particular were superbly end to end as the two sides went at each other in a flurry of good passing, chances and goals.

United made changes, bringing in Curtis Nelson, Xemi Fernandez, Joe Rothwell, Hall and Jon Obika as well as switching full backs Christian Ribeiro and Dwight Tiendalli. The changed side started well and Rothwell had the first chance after six minutes, blasting against the body of keeper Wieger Sietsma after a good run on to an Obika pass. The keeper then made an outstanding save when Fernandez slipped a superb pass through for Obika, whose fierce effort from 12 yards was parried before looping just wide of the mark.

However, the Dons had chances of their own and took the lead from a corner after Eastwood had tipped an Upson effort over the bar. From the set piece Upson rolled it short and Thomas-Asante trotted into the box unattended before drilling past Eastwood at the near post. A poor goal defensively but the U’s came straight back and Payne saw an effort spectacularly pushed over by Sietsma and Obika headed against the post before we had reached the 13th minute.

It was breathless stuff - Muirhead totally missed the ball in front of an open goal, Fernandez bent an effort wide at one end, Nesbitt beat the post at the other and all this and more had happened before we had reached the 25-minute mark.

United had threatened an equaliser and on 33 minutes it was Payne who drew them level with a quality finish. It started with a slip by Dons defender Scott Wootton that allowed Payne to skip clear and run in to space. The men in red backed off and the on-loan Terrier danced past one man, floated right to left and then thumped home from the edge of the box to make it 1-1.

Four minutes later and the U’s were in front. Hall took the ball down well and went past former teammate Dean Lewington who stuck out a leg. Hall went over, ref Sarginson pointed to the spot and Payne was deadly accurate with an unstoppable penalty just inside the right-hand post.

United might have tried to kill the game until half time at that point but instead back came the Dons immediately. With 39 minutes gone, a swift break down the left and a low cross which Ariyibi nonchalantly bent inside the left-hand post, giving Eastwood no chance and making it 2-2. Then right on half time Ariyibi played a one-two, broke through a weak challenge and slipped the ball beyond the totally exposed Eastwood to make it 3-2.

The second half was initially less end to end, United doing most of the pressing and the Dons less open in their approach. A couple of early crosses eluded Fernandez as he made intelligent runs into the box but even the wonky MK trumpeter needed to draw breath after the first half. After 15 minutes of that it was time for the fun to start again...

Eastwood made a good save from an Upson free kick on 62 minutes but then Hall had his moment. Booed by the binary 101 away fans all night, Hall was lethal with his finish on 64 when Obika ran at goal, rolled it to his right and Hall left a defender on the deck before hammering the ball past Sietsma for 3-3.

Two minutes later and the seventh goal of the night made it 3-4. Seager this time gave the Dons the lead with a powerful deflected finish from 12 yards out, giving Eastwood no chance and restoring his side's lead once again.

United had presentable chances for Rothwell, Obika and Mousinho but with Stevenage winning in the other group game against Brighton it was all largely immaterial.

United go in to Friday's draw where they will be away against the winners of Group A, B, C or D. Unless it's West Ham, when we would be at home.