Oxford United let a half time advantage slip as AFC Wimbledon came from behind to win 3-1 at Plough Lane this afternoon.

With a terrific atmosphere for most United fans’ first visit to the new Plough Lane, the game began at a million miles an hour and never really let up. Mark Sykes' goal just before the break gave the U's the lead but two goals from Jack Rudoni and a header from Will Nightingale saw the home side complete a memorable comeback and deny the U's top spot in the early League 1 table.

There was some excellent defending at both ends before Matty Taylor, having cleared off the line from a set piece at one end, raced the length of the pitch but could only head James Henry’s cross wide in the 15th minute with the game's first clear chance.

The Robinsons in the Dugouts, Karl and opposite number Mark, appealed for calm on the ball as their teams closed each other down and denied space in a flurry of yellow and blue/blue and yellow, but United gave as good as they got despite the final score. Ryan Williams, the one change to the side that beat Lincoln, brought his customary energy on the left of attack while the outstanding Sykes bustled past men on the opposite flank and linked up superbly with the always probing James Henry.

The sides traded chances, Henry drilling into the side netting after half and hour and Sykes sending another effort into the gloves of keeper Nik Tzanev soon after, but Jordan Thorniley made two vital blocks at the other end and the lively Adedapo Mebude reciprocated after 34 action-packed minutes.

What the game needed was a goal and on the stroke of half time Sykes obliged. The Dons defence had already had a couple of shaky moments but when Nighingale gave Anthony Hartigan a ball he didn’t really want, Sykes was onto him in a flash to steal the ball and run at Tzanev before rolling the ball home to send United top of the league at the break. 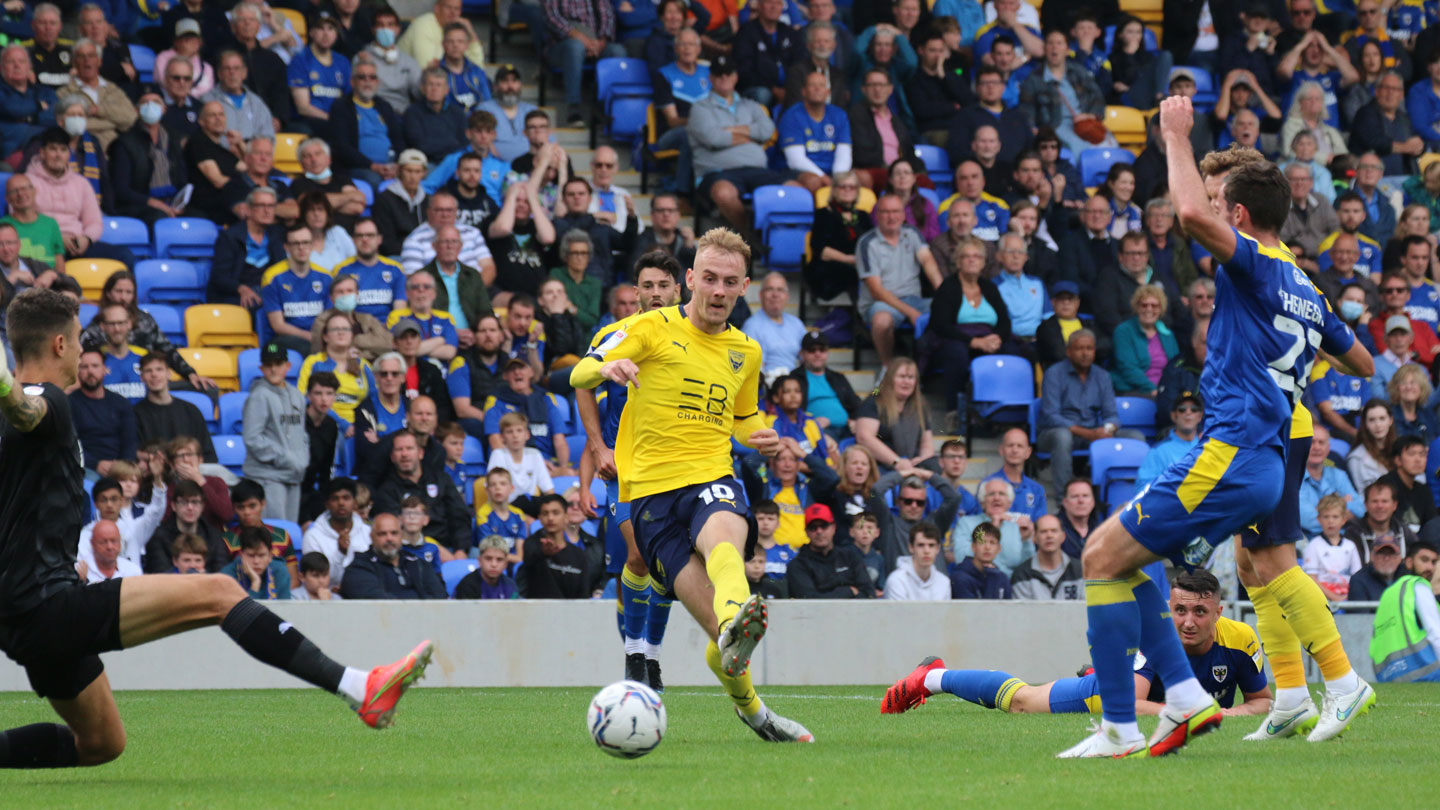 Back came the U’s, attacking towards their sold-out away end. Williams was almost immediately given a shooting opportunity which was cleared off the line by a desperate Dons defender, Henry fired wide, Brannagan got on the end of a cross but could only steer his instant effort wide.

Nathan Holland came on, Herbie Kane was given a league debut, Sam Winnall was added to the attacking mix and the U's switched to two up top for the final 20 minutes. A magnificent pass from Henry deserved a goal but Heneghan timed his tackle perfectly to take the ball off the toes of Holland as he prepared to shoot.

That was the crucial moment and one minute later another set piece put Wimbledon ahead. Outswinger, Nightingale above everyone and a downwards header beyond the helpless Stevens to make it 2-1. Two minutes later and it was game, set and match Wimbledon as Nesta Guinness-Walker stormed down the left and fed Ayoub Assal who moved the ball further across for Rudoni to beat Stevens from the edge of the box to make it 3-1 and leave the U's with just too much to do in the last ten minutes.

A fine game of football, lots to admire from both sides, but a defeat made harder to take by the endless possibilites apparent at half time.

Lessons to be learned as United prepare for the first week of the season with no midweek game, then a home match against Wycombe Wanderers next Saturday. See you there.