With the 2021/22 Sky Bet League 1 season well underway and with the U’s nicely poised in the table, Oxford United wanted to provide an update on further successes which are taking place off the pitch.

Commercially we are pleased to welcome a healthy Partner Portfolio for the campaign, which has seen the return of long-term partners as well as new organisations joining the Oxford United family for the first time.

2021/22 has seen the club benefit from tremendous support from a whole host of local businesses from the Oxfordshire community. Whilst globally, we have also seen a growth in partners, which will continue to develop the club’s international presence for the coming years. This is emphasised by a 17% increase in partner revenue this season.

In comparison to last season, the club has seen a 56% increase in commercial revenue as we approach the halfway mark of the campaign. Seasonal Executive Boxes are now fully sold out, whilst Matchday Bookings for the remaining home fixtures are now severely limited.

The reintroduction of the Restaurant Hospitality Package this term has also seen a positive response, and we look forward to welcoming guests to games through this offering at Wigan Athletic on Saturday 18th December, and fixtures after Christmas, including Sheffield Wednesday and Sunderland.

Since securing the public catering rights at the Kassam Stadium, the club has seen positive increases in public catering spend. With close communication with fan groups and Farr’s Catering, we anticipate seeing the quality and range of offerings develop significantly throughout the season.

The advancements in pitch side advertising have welcomed a range of new businesses to gain exposure on a match day. The eye-catching LED perimeter boards are a great advertising opportunity, and we still have availability for the rest of the season.

Speaking of the many successes this season to date, Business Development Manager, Peter Rhoades-Brown said: “We’ve had a busy summer off the pitch which has been reflected in the volume of partnerships that have been announced since the start of the 2021/22 season.

“The introduction of EB Charging as Front of Shirt Sponsor, as well as the more recent arrivals of Mola TV as Family and Community Partner, and Bangkok Glass as Training Ground Sponsor have demonstrated the positive and ambitious direction the club is continuously heading.

“We are all in this together and look forward to another successful season. Thanks to all our partners and our fans for the continued support of Oxford United.

Get in touch with Peter Rhoades-Brown and Adam Harris in our commercial team on commercial@oufc.co.uk today. 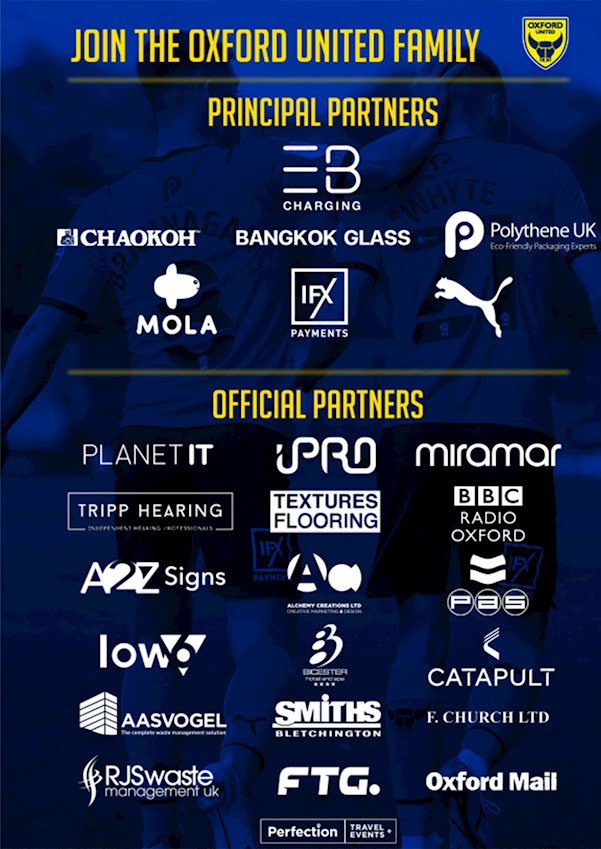