Oxford United travel to Burton Albion tonight for the first round of the Carabao Cup (7.45pm)

TEAM NEWS
United have a few aches and pains after Saturday's draw at Cambridge. Skipper Elliott Moore has been suffering from a chest infection - he tested negative for covid - while Sam Long has been feeling a tight calf after regaining fitness from a hamstring problem over the summer.

Jamie Hanson (dislocated shoulder) is ruled out as is Derick Osei Yaw with a hamstring problem but midfielder Leon Chambers-Parillon is available again after an ankle injury. Youngsters Tyler Goodrham, Josh Johnson and Ben Watt are all added to the squad as cover as Karl Robinson decides whether to make changes:

"We have players who need minutes and we have one or two players struggling but we will be strong" he said. "Burton are the league's form team over the year so it will be a good game and one we look forward to."

See Karl previewing the game in iFollow right now where we have Billy Bodin as our guest in the new look Preview Show and an exclusive chat with Ryan Williams.

THE OPPOSITION
Jimmy Floyd Hasselbaink has rung the changes at the Pirelli Stadium and six of his 12 summer signings made debuts in Saturday’s opening day win at Shrewsbury.

Former U’s forward Kane Hemmings misses the game with a hamstring injury and Hasselbaink is likely to make changes to the line-up despite Saturday’s win.

“Every manager will say, we are not the finished article yet. There’s still a lot to work on and get better at. It helps, big time, to get a good start and I’m no different. If you get that good feeling, that work ethic going then it’s a very good thing.” 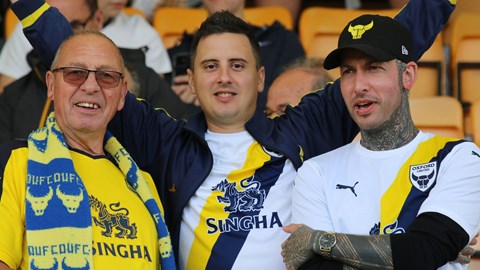 Look After Each Other

TICKETS
Tickets are available on the night:

Pre-ordered tickets can be collected at the Burton Ticket office

COME ON YOU... WHITES
United will be wearing their brand-new white third kit again tonight. The first time the new yellow kit will feature is for the home game against Charlton Athletic on Saturday . CLICK HERE to pre-order any of the new shirts

LOOK AFTER EACH OTHER
It's great to be on the road again but the most important thing is for everyone to feel safe and comfortable back in a crowded football stadium. We are the Yellow Army, we look after our own. Make sure everyone around you is OK as we get behind Karl and the team.