It was a steaming hot day in Wiener Neustadt and as I approached the town square a pale yellow heat haze was softly shimmering across the cobbles. I was hot and bothered and had made the fifteen minute walk from the football stadium to check out the local town ahead of our pre-season friendly. I’d conducted a recce the night before and found the town almost entirely shut, but today the yellow haze was intensifying and there was a buzz emanating from a gaggle of umbrellas and plastic tables at the top of the square.

Indeed, on closer inspection, the heat haze was the remnants of a yellow smoke bomb and it seemed to be under the chair of a very tipsy young man from Oxfordshire. ‘Hello Son’ I said before hugging most of the 20 fans who were gathered there turning the town into a mini Oxford. I helped share out official t-shirts which the fans had designed and distributed but which had mostly been brought over in the kit van. With numbers growing by the minute we moved on to a bar called Clumsy’s and the atmosphere became, shall we say ‘lively’?

I walked back towards the ground and passed Chairman Darryl Eales and Chief Exec Mark Ashton. ‘How’s it looking?’ they asked tentatively. ‘You’ll be fine’ I said…

Events that day remain hazy but legendary. It set the tone for what was to follow. The next day we had a barbecue and open training session and a game of cricket broke out (my bat, my rules, in the lake is NOT out). What was to follow grew from there. The trip was epic and the growing bond between fans and club gained momentum so by the time the season itself kicked off at home to Crawley we were convinced that this would be our year.

Of course there was was a bump in the road on the opening day when we opened with a home draw against Crawley, but then a league cup game at Brentford saw Johnny Mullins on the scoresheet and Kemar Roofe score from half way. We were up and running.

We went out of the league cup at Sheffield Wednesday but the league form was growing game by game. We won at Bristol Rovers- unheard of and another Roofe wonder strike- and although we lost at rivals Northampton the squad was so cohesive and so experienced. People talk about Kemar and Danny Hylton,Chris Maguire, the emerging Chey Dunkley and so many others, but Joe Skarz and Alex MacDonald were seasoned pros who brought a new level of professionalism. Add in the future Premier League swagger of John Lundstram and George Baldock, the non-stop Liam Sercombe, Danny Rose, Ryan Taylor and youngsters like Sam Long, Callum O’Dowda, Josh Ruffels, James Roberts, Josh Ashby… it was a fantastic mix. Mullins and the superb Jake Wright were so formidable it took half a season before Chey established that there really ain’t nobody like him. Never understimate the part that others such as loanee Jordan Bowery and keepers Sam Slocombe and Benji Buchel played either.

Buchel’s chance came away at Braintree Town in the FA Cup. It took a replay but that took us through to play Premier League Swansea. Roofe fully made his name that day but suddenly we were national news. It didn’t matter that we lost to Blackburn in the next round because we were advancing on Wembley and the night we beat Millwall in the semi-final there was an all night party which the Checkatrade Trophy has never been a catalyst for, before or since. I was stone cold sober, just happy to be there talking rubbish with a group who were so united. Almost as good as Clumsy's.

Michael Appleton was the man behind it, with Faz as his right hand man and Chrissy Allen and Wayne Brown to the fore, but there was a tight-knit group of backroom staff who are still friends to this day (not you Bondy).

The second half of the season was like clinging on to the back of a runaway train. It almost got derailed at Newport where the team only drew and for the first time all season I had a disagreement with the Chairman- ‘we’ve blown it and were poor’ Darryl told me 'it’s a valuable point’ I foolishly opined. We were both right (if he reads this, just me if he doesn’t)

The next week Oxfordshire went to the Lake District and we took over Carlisle. A queue snaked round the local pub as fans waited for free beer but the party mood went way beyond the beleaguered walls of the Railway Inn. Sercombe scored and all I could see was limbs behind the goal. A wonderful day.

On May 7th we played Wycombe at home. A win would be enough and at half time we were still not assured of promotion. Then the real Oxford United stood up and all those months of hard work and intensity swept the visitors away. Like Wembley 2010 I was next to the bench in injury time. Swap Alfie Potter for Callum O’Dowda (see also Jeremy Charles) and a clinching goal which sparked an exodus from the bench, leaving me alone in the dug out to silently punch the air. We had done it.

Readers, there were celebrations. There was a giant game between fans, players and staff on the pitch but somewhere along the line I ducked out. In 2010 I celebrated with the club, this time I wanted to celebrate with my friends, the people I used to stand with at the Manor. I ordered champagne in one pub and we ended up being thrown out of another for singing Chey’s song. It wasn’t Clumsy’s but it was close.

Some seasons merge in to one. That year was a different story. A proper story with a brilliant ending. Enjoy the rerun.

See a full Gallery from the promotion clinching game v Wycombe above, click HERE to see Alex MaDonald, Chey Dunkley and Johnny Mullins reunited, and join us on You Tube at Oxford United Official at 8.15 to see the Wycombe game in full, with coverage on Twitter and Insta as well. 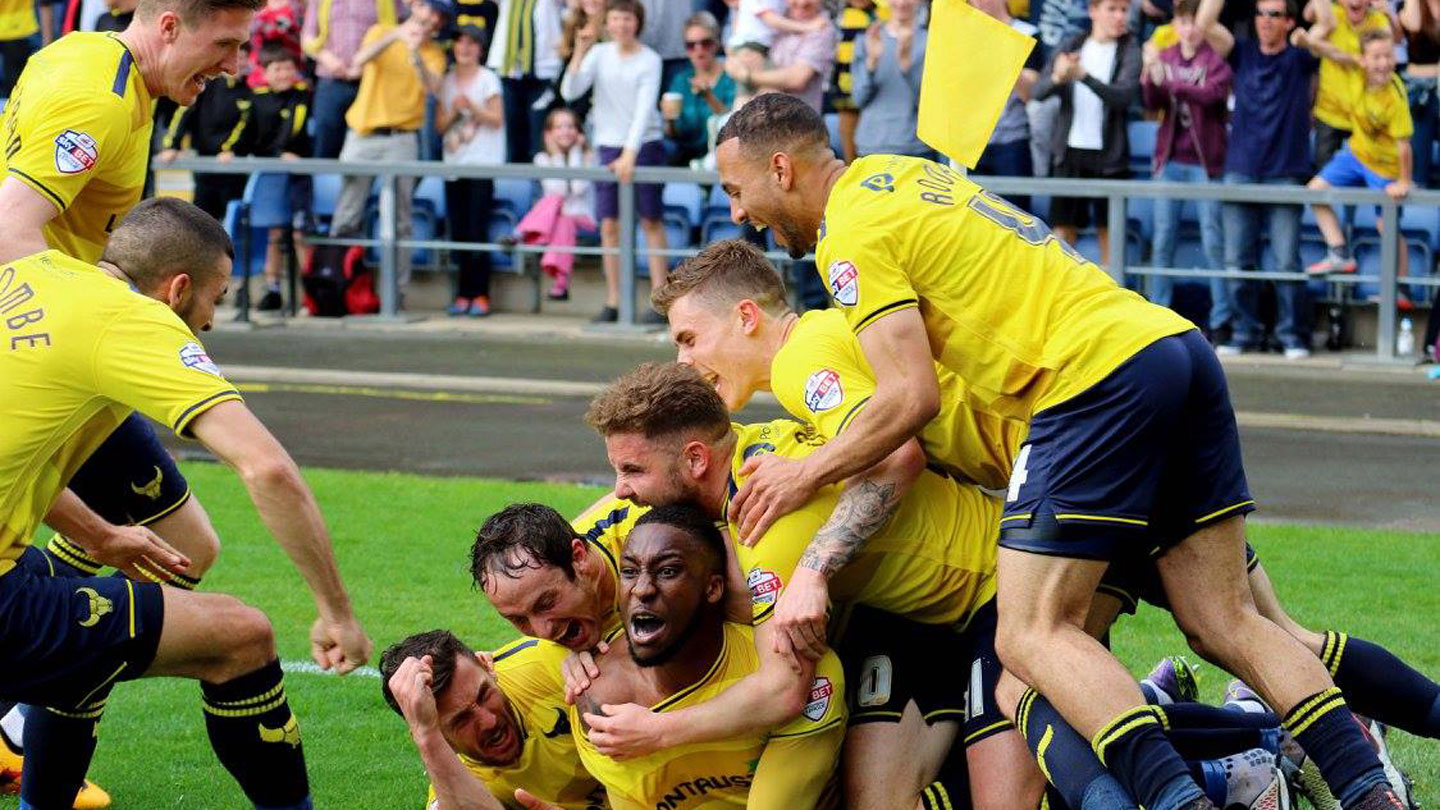 Chris Williams is the club's Communications Manager but the views expressed are his own rather than the club's. And yes, he does seem to have been in a lot of bars over the course of a season