TEAM NEWS
United boss Karl Robinson has an interesting choice to make up front where Jerome Sinclair and Jamie Mackie are competing for the lone striker position. Karl suggested last week that the pair would alternate, depending on the strengths of the opposition, but the other option is to play both and change shape slightly.

Samir Carruthers may have played his way in to contention for a starting place with a superb performance in the Under 23s' win over Hull City in midweek, while Jonte Smith scored again and could step up to the bench, although Marcus Browne will be hoping that his goal last week against Sunderland lifts him from bench to starting eleven.

Mark Sykes is the one doubt with a knee injury after he collided with the post in training last week. 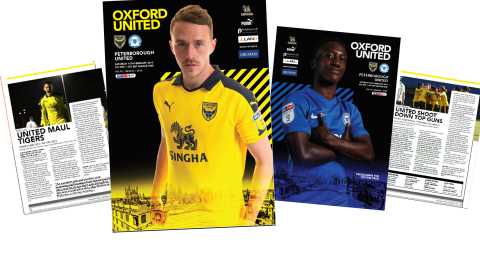 Three wins in 16 games mean that Darren Ferguson's team has slipped from their place in the automatic promotion places. “I won’t care if we win 1-0 after the scrappiest game imaginable,” Ferguson said this week. “We just need to pick up three points any way we can.

“The run we are on is obviously not good enough and understandably the players are low on confidence.

“But momentum can change quickly and we’ve concentrated on the positives from the last two games even though we’ve lost them both (home to Plymouth, away to Doncaster). There were mitigating circumstances with a red card in the first-half in both games and I honestly believe we would have won them both playing 11 v 11.

“We have 14 games to go and we will probably need to win more than half of them. It’s difficult to predict exactly - we went down with 54 points once - but that’s what we must aim for. If we can get the level of performance right and have some luck along the way we can do it. I’ve been in this position many times and there are alaways twists and turns.

Match Day
The RES gate behind the North Stand will not be in operation for this game, meaning that fans can move from one end of the stadium to the other behind that stand.

If you are a Peterborough fan travelling to the game then a full Supporters Guide is available here: OUFCAwayDayInfo.pdf