Oxford United travel to Blackpool on Saturday looking to build on a promising first week...

TEAM NEWS
United are off to a solid start in Sky Bet League 1 after a draw at Sunderland on the opening day and a win against Peterborough at home last Saturday. On Tuesday night there were changes to the side as they beat Peterborough by the same scoreline in the Carabao Cup and boss Karl Robinson faces some difficult decisions before naming his side.

Elliott Moore and Anthony Forde made debuts in midweek and Sam Long, Mark Sykes, Jamie Hanson and Rob Hall all returned to the side but John Mousinho, Alex Gorrin, Tariqe Fosu, Chris Cadden, James Henry, Jamie Mackie and Ben Woodburn all played in the opening two games and will be hoping to return to the starting eleven.

Shandon Baptiste in back in full training but unlikely to feature this weekend but Dan Agyei has worked hard and could be in line for a first place on the bench after Malachi Napa's unfortunate injury in midweek. The young striker's operation went well and he asked us to pass on his thanks to all of the fans who have sent messages.

THE OPPOSITION
Blackpool boss Simon Grayson expects a tough test from the U's on Saturday.

“You can’t take any side for granted," he said.“Karl knows this division and he’s got a group of players that have started the season brightly and have picked up some positive results.We will do what we normally do and that’s focus on their weaknesses and try and use our strengths to go and win the football match.

“If we can try and create an atmosphere like we had for the first game of the season and play as well as we have done then we won’t be too far away.They will be attack-minded, because Karl has had his teams like that over the years. They’ve got some experienced players with Jamie Mackie up front and James Henry in the wide positions and John Mousinho I know from my Preston days.

“They’ve got a mixture of good footballers and grafters as well.In terms of where they are in the division and what they do, I’d suppose you’d have to say it is the toughest test so far." 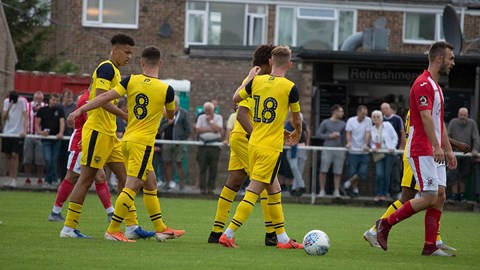