Oxford United head for Charlton Athletic tonight in Sky et league 1. Here is a full guide to the team news, tickets and how to follow the game from the Valley.

United welcome back Cameron Brannagan after suspension. The midfielder missed Saturday's draw at Bristol Rovers after collecting five yellow cards this season but is a direct replacement for Shandon Baptiste who dislocated his shoulder on Saturday.

Samir Carruthers came on for Baptiste at the Memorial Stadium and could be in contention for a start while Ricky Holmes has been having intensive treatment on a back problem  and will be keen to feature against his former club, although more likely to return against Shrewsbury Town at home on Saturday.

See Karl Robinson talking about the game in the Preview Show in iFollow where you can also watch the whole game LIVE.

“The way it all just fitted into place was crazy and I have thanked him" Bowyer told Charlton's official website. "Karl’s gone on now and gone to Oxford and is doing his own thing and he’s going to be coming tomorrow and you know what it is like when you go back to somewhere where you’ve been before, you want to win that little bit more and Karl is no different to anybody. He’s a winner and he’ll be getting his side ready for tomorrow’s game, just like we are.

“It’s going to be a tough one. We know how Karl likes to play, obviously working underneath him, he’s got a philosophy of playing and it’s exciting football at times. I expect them to come, be attacking and see what happens at the end.”

This game is not all ticket and tickets are available on the night priced:

iFollow has the whole game live  and is available whether you are in the UK or overseas. All EFL games not played on a Saturday at 3pm are available to view live in iFollow (unless they are televised) so you can enjoy all the action on your laptop or tablet for just £10 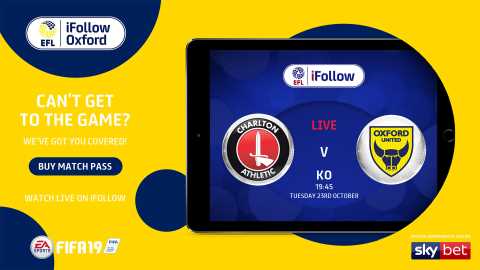