Manager Karl Robinson was left to dwell on the positives rather than a chaotic six minutes that cost his side all three points at Scunthorpe on Saturday.

3-0 up and seemingly on course for their first away win of the season, United were swamped in a six minute spell that saw the Iron hit back to end their own five game losing streak with a 3-3 draw.

“You come away from home and probably expect the opposition to have 15 minutes when they are on top” Karl told iFollow. “We drifted away from the way we have been playing, but we are six unbeaten now so that’s a positive. After 65 minutes we were under the cosh and the place was buzzing at 3-3 but we didn’t crumble, we stood up to the fight - some will say too late because they had scored the third, but it’s even harder to play then and react.

“We needed to get the ball in to better areas at that stage; they were getting more and more direct and more and more in our face and making it increasingly difficult for us to play. We have to learn from that but we are still getting better and it is a work in progress. We haven’t conceded from open play in the last six games so there are definitely positives.

“I have to thank the fans as well. That is a consistent message from the fans and I’m sorry we didn’t see the game through for them; we are hurting from that. But now we have a cup game at Wycombe on Tuesday, the FA Cup next Saturday, and then another massive game against Gillingham. It’s at home and we are making it very difficult for whoever we play against at home at the moment so we move on and we prepare for this next little run of matches.”

See highlights and reaction, all in iFollow right now. 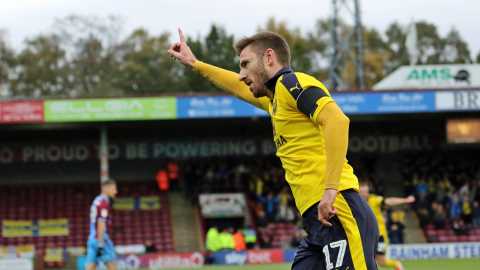 Report, As It Happened, Stats and Gallery