Oxford United boss Karl Robinson was left frustrated when his side lost 2-0 to bogey team Fleetwood Town on Saturday.

The U’s have never beaten the Cod Army and were undone by a Ched Evans goal and a penalty, having had to make a late change when keeper Simon Eastwood was injured in the warm up

“Some things are out of your control” Karl told iFollow after the game “but in the last two games we have lost Samir Carruthers after 20 minutes and then Easty in the warm up on Saturday. You can imagine the blow that is to us.

“So to deal with all that and then some of the decisions that went against us; the players had a lot to deal with. The fans stuck with us, which was great, but we are performing under par. It was Ricky Holmes’s first 90 minutes, Rob Hall’s first start in eight months or something silly like that, Marcus Browne’s first appearance and all of our front four didn’t do a pre season with us. To go through pre-season without an injury and then get two innocuous ones like we have is a real kick to us.

“But we accept the bad press we are going to get after losing two games; conceding six and not scoring is not acceptable and the players certainly know that.

“We are big enough to accept the criticism but I don’t think Fleetwood were better than us. We lost to a goal after a foul to Tony McMahon in the build up and then a late penalty, but we weren’t at our best. You saw glimpses of it but it is a new front four and once it starts clicking you will see a very different performance.

“Losing two games at the start looks worse than later in the season when you have points in the bag, so it looks worse than what it actually is. We will dust ourselves off and go again when we play Coventry at home on Tuesday night.”

See the full interview plus the thoughts of Scott Shearer and highlights of the game, all in iFollow. 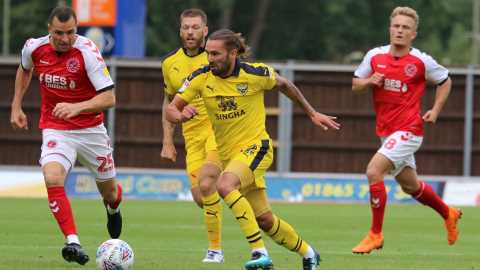