There was no hiding the frustration for Karl Robinson after Oxford United’s opening day defeat at Barnsley. The United boss was pulling no punches when he spoke to iFollow immediately after the game.

“It wasn’t a result anyone expected but it might be a good thing” he said.”I am telling you now that it won’t be the same team that plays at home to Fleetwood on Saturday.

“Barnsley outran us and outfought us. We lost every battle in midfield and didn’t win one tackle or header. Their centre backs battered our two strikers, our centre backs got bullied by their two strikers; those are the facts of the game. We worked on set pieces all week then people didn’t go in the right positions; those are facts not opinions and I was very straight with them as I always am.

“Sometimes you might come away from here losing 2-1 or 3-1 and say ‘we were close’ but today certainly showed us where we are weak. The transfer window closes on Thursday. We need to bolster the central midfield and now we are looking like being without Samir Carruthers for three months with a knee ligament injury he got in a tackle; nobody’s fault just the way the game is. Maybe some players think they are too safe. That’s certainly not the case.

“It was atrocious and I want to apologise to the fans who came and supported us. The dedication they showed us wasn’t replicated on the pitch. That’s the be all and end all- we didn’t show the commitment that our fans do and that is never ever going to be the case again.”

See highlights and more reaction, all in iFollow. 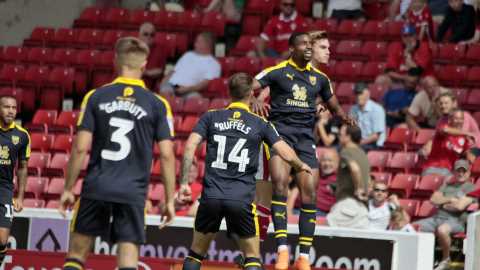