Oxford United’s win over Rochdale on Saturday capped a fine run of results that has steered the U’s away from any danger.

“The players were asked a different question today going 1-0 down” he told iFollow. “I’m fuming over the goal which took two deflections and dropped to the guy who finished it well; sometimes ricochets just drop and you have to accept them. But our changes made a difference and we looked more dynamic. Our energy was superb and to take two penalties with two different takers, both of them defenders, just shows you the confidence in the team. We should have beaten Fleetwood because we dominated that, then we win, we lose at Wigan right at the end, then we have two more wins. So that shows we are moving in the right direction

“I can’t ask any more from my players and I thought the fans were magnificent as well. Seeing Darryl on the pitch was great after all he has done for the club, and continues to do, and Tiger there with his wife and children just shows his appetite for the club as well.

“A few eyebrows were raised when I first came here and we have a big summer ahead which I’m really looking forward to. Don’t think I’ve come here blind, I’ve come with my eyes wide open and I’m not being disrespectful, just honest when I say that I didn’t realise how good the fans were.

“I don’t mean that to sound ignorant; when I came here as the opposition manager or scouting or whatever I am wrapped up in my own job and you don’t always feel it, but I felt it on Saturday. Credit to the fans and I hope we can be a credit to the yellow shirt that I know means so much to so many people in the city and the surrounding towns and villages. We get massive support from them and hopefully we can harness that because we had over 8,000 there on Saturday and hope is a great thing to have.

"It looks like we have hope and belief in abundance so lets hope we can use moments like this as a catalyst to move forward.”

See the full interview plus extended highlights and a look back at the End of Season Award night, all in iFollow. 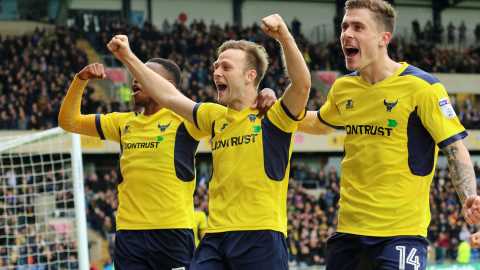