Oxford United's promotion drive continues to gather pace as goals from Matty Taylor and Cameron Brannagan earned them all three points at Shrewsbury this afternoon.

An early strike from Taylor was cancelled out by a Ryan Bowman goal on the hour, but Brannagan made no mistake from the spot with eight minutes left to move United onto 66 points and one step closer to the play-offs, with just eight games to go.

Two seasons ago this fixture was a dramatic last game before Covid interrupted the season. Today, any thoughts that the pandemic has gone away were dispelled when the team sheets were handed in: United were without Jack Stevens, Sam Long and Ciaron Brown through illness, meaning three changes to the back line. In came John Mousinho, skipper for his first league game since December 2020, Simon Eastwood in goal and Steve Seddon as a stand-in centre-half.

Those sort of disruptions, plus an injury to Sam Baldock after four goals in his first five games, would worry some teams but in United’s case it seems to inspire them.

There were two important blocks from Mousinho and Seddon first, one with the chest and the other with a sneaky forearm, but then on 11 minutes United were ahead from Taylor’s 21st goal of the season. 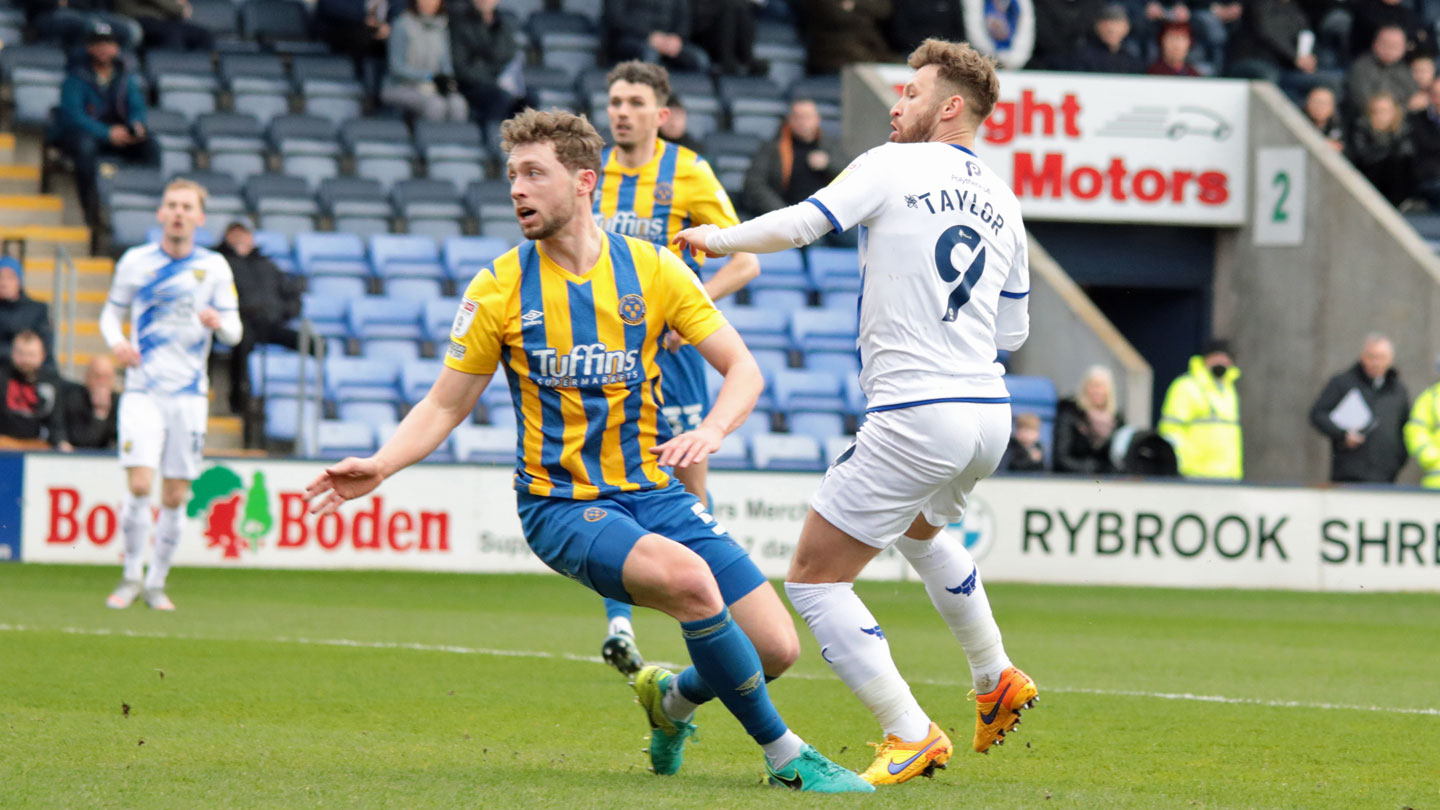 It was a superb through ball from Herbie Kane that started it off, allowing Gavin Whyte to gallop into space and force keeper Marko Marosi into a good save. Except that the ball bounced up to Taylor who volleyed into the empty net to give the U’s the lead.

Kane ran the show in an impressive first half hour, but the Shrews came back at them and were dangerous from set pieces all afternoon. It took a wonderful save from Eastwood to keep an Ethan Ebanks-Landell header out after 23 minutes.

United were solid other than that chance, though, with Luke McNally colossal at both ends of the pitch. And the middle bit. His battle with Daniel Udoh was a highlight as the division’s top scorers and one with a defensive record only second to the top two cancelled each other out.

The second half saw an early chance for Ryan Williams, racing in at the back post but half a yard away from being able to convert a half volley, but United didn't create their usual host of chances and the stubborn Shrews levelled on the hour with the first chance of the half.

Elliott Bennett created the goal when he surged down the right flank and whipped a low cross into the six yard box. Bowman met it with a right-footed effort and the scores were level at 1-1.

United just needed to steady the ship as Salop forced them back and put the ball into the box from a string of corners and crosses.

They did that expertly and then found a way to win the tightest of games.

Billy Bodin made a welcome return from injury and almost slipped the hard-working Brannagan in on goal, only for Matthew Pennington to slide in at the last moment, but with eight minutes left United won the game from the spot.

Williams never stops running and somehow had the energy to race the length of the pitch and take on Bennett who stuck out a leg and sent the Australian wing-back to ground. Ref Andy Davies pointed to the spot and Brannagan did the rest with his 13th of the season.

You wouldn't want to leave this fixture early would you?

Three points despite adversity and based on sheer determination. 1,200 away fans celebrating with the jubilant players and a job very successfully completed.

A big week ahead off the pitch, with stadium news anticipated, then another big weekend when the U's welcome Ipswich Town on Saturday.