Ahead of the Third Round of this season’s Emirates FA Cup – a stage that has become synonymous with results that defy logic throughout the competition’s 150-year history – The FA has today released new mathematical research that reveals the 10 most improbable FA Cup Third Round giant-killings and the U’s famous win over Swansea City fives years ago is ranked as the fifth biggest Third Round shock of all time.

The FA teamed-up with the Institute for Mathematical Innovation at the University of Bath to commission the research that considered Opta data from more than 8,000 FA Cup ties as part of the process. Using probability theory, the University was able to verify a historical top 10 of the least likely scorelines from the last 50 years of the competition.

In order to perform their calculations, Dr Adwaye Rambojun and Professor Andreas Kyprianou from the University of Bath built a bespoke mathematical model that takes in to account the overall probability of the lower league teams reaching the Third Round, the difference in league status and the timing and sequence of the goals scored in each tie.

Goal scoring and league position trends across more than 8,000 ties from the competition since the 1959-1960 season were also considered to understand how these factors historically influence the individual outcomes.

The equation developed by the Institute for Mathematical Innovation at the University of Bath to calculate Third Round score probabilities.

The final list of results features several familiar ‘cupsets’ but now, for the very first time, the fixtures have been ranked in order of the statistical probability of each scoreline occurring.

United’s victory over Swansea City in 2016 was ranked in the research as the fifth least probable Third Round result in the last 50 years of the competition. Kemar Roofe was the hero as League Two Oxford knocked Premier League Swansea out. Making the result even more improbable was the fact that Swansea took the lead after 23 minutes, but three Oxford goals in the space of 14 minutes, including two for Roofe, sealed a memorable win for The U’s.

The study revealed that Woking, then of the Isthmian Premier League, defeating Division Two (now the EFL Championship) West Bromwich Albion 4-2 at the Hawthorns in 1991 was by far and away the least likely Third Round scoreline in the last 50 years of the competition, with just a one in 15,959,312 chance of that upset taking place. To put that into context, the result was less probable than conceiving identical quadruplets (one in 15 million probability).

Commenting on the research, Dr Adwaye Rambojun, Research Associate at the Institute for Mathematical Innovation at the University of Bath, said: “ Oxford United’s result defies logic but, as history proves, on any given day the unthinkable can happen. That’s the magic of the Emirates FA Cup and we have seen it time and again throughout the competition’s illustrious history.”

Derek Fazackerley, Assistant Manager, Oxford United, commented: "I think we all knew we had achieved something great that day but we didn’t realise the odds were so highly against us. That’s the beauty of the FA Cup: we were playing so well at that time and if you had asked any of the fans, players or the staff we genuinely believed we had a chance of winning despite the league positions. We treated Swansea with respect but we had such faith and confidence and I thought we fully deserved our win that day.”

Discussing the research findings, Andy Ambler, Director of Professional Game Relations at The FA, said: "It’s fascinating to look back at some of the Third Round games that have helped define the Emirates FA Cup

and elevated it to the status of the world’s most popular domestic cup competition. The commissioned research outlines the competition’s ability to regularly defy logic and will hopefully spark many fond memories. In its 150th anniversary season, the Emirates FA Cup retains the values of hope, opportunity and equality. Improbable results are part of the competition’s fabric, providing life changing moments for players, managers, fans and communities alike and I am sure there will be plenty more to come as the competition looks ahead to an exciting future.”

More details about the forthcoming Emirates FA Cup Third Round can be found on TheFA.com. From Headington to Wembley


Oxford United’s proud history will be the focus on Thursday (18th November) when club historian Martin Brodetsky will be giving a talk in the Makers Space at the Museum of Oxford on the club’s... 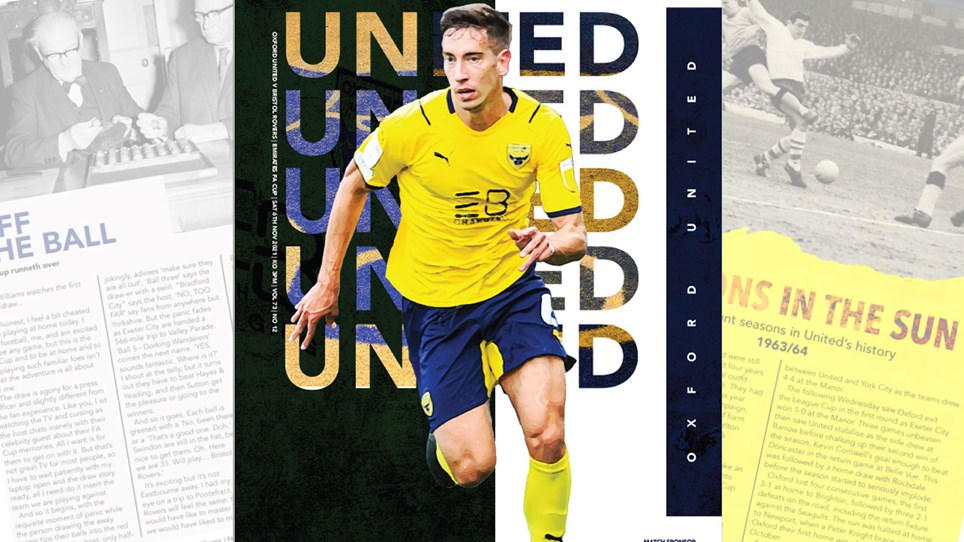 
Bristol Rovers are in town on Sunday (1pm) in the Emirates FA Cup and we have produced another excellent edition of our award-winning match programme to mark the event.