Oxford United’s amazing season will go down to the very last day as a Dan Agyei goal gave them another remarkable victory at Shrewsbury this afternoon.

Leading through an Elliot Lee goal United were losing 2-1 until James Henry gave them hope and sub Agyei smashed home a priceless winner at the end of an astonishing game of football.

It took two and a half minutes for United to take the lead and at the stage it looked as though a play-off place was there for the taking. Mark Sykes made it, robbing a dawdling defender on half way and running at the remaining backline as they retreated. When they finally tried to close him down he rolled it to his left, Taylor unselfishly squared and Lee gleefully rolled the ball into an empty net to surely calm any early nerves that may have been fluttering. 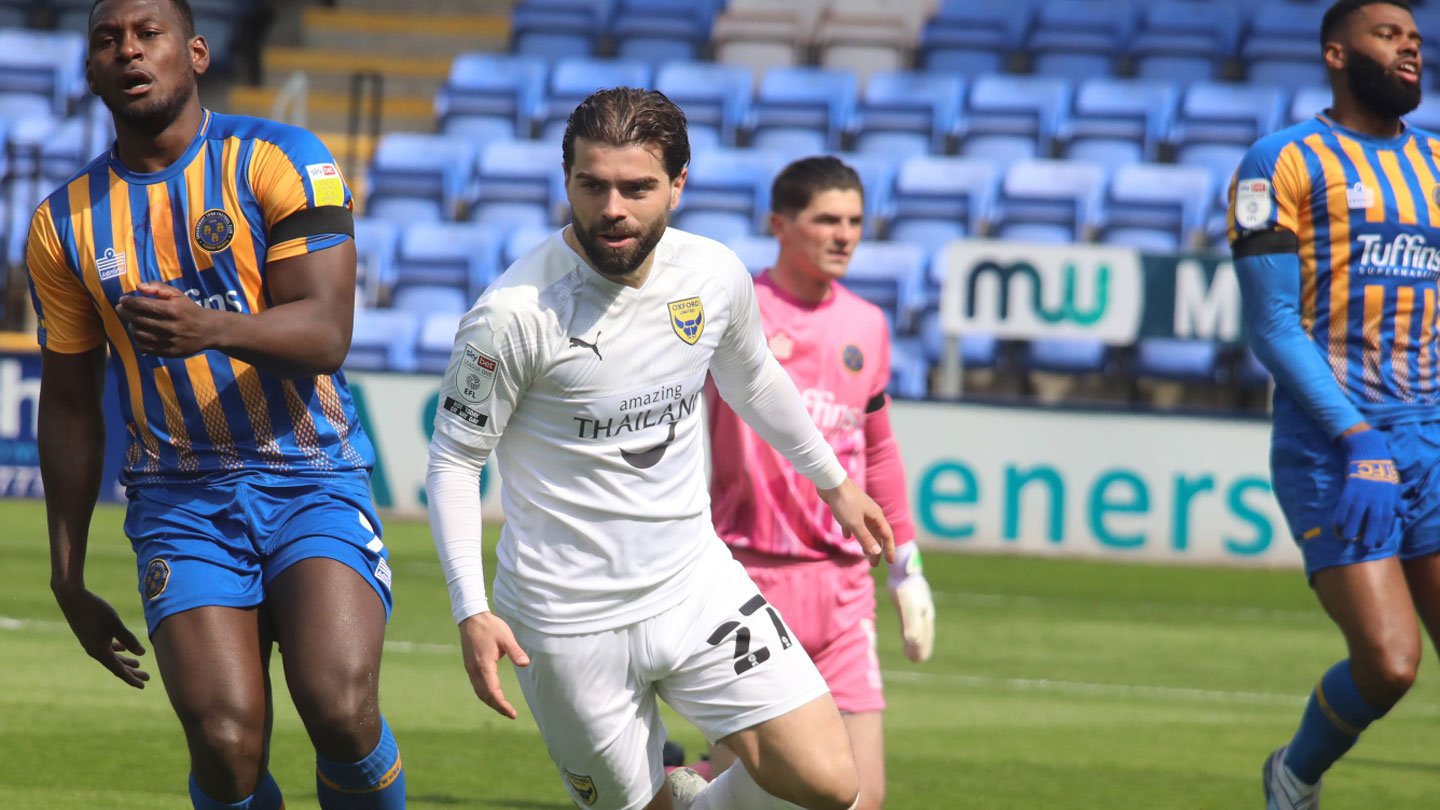 Instead Shrewsbury boss Steve Coterrill, back at the ground for the first time in half a season after serious illness, helped inspire a comeback. After 17 minutes his team were back on level terms after a good spell where they forced a decent save from Jack Stevens as well as a brave one as he threw himself among the flying boots to stop Ethan Ebanks-Landell. However, from Harry Chapman’s resulting corner Matthew Pennington was in a suspicious amount of space to thump a free header in to the top left corner with Stevens helpless.

It got worse very quickly when some uncharacteristic defending allowed Josh Vela to stroll into space behind the defence and roll the ball casually beyond the exposed Stevens to make it 2-1.

United didn’t panic: they haven’t done that all season. Atkinson had nodded a chance just over, Lee let fly from 20 yards and missed by inches Josh Ruffels forced keeper Harry Burgoyne into a good save as they tried to get themselves level again before the break but a Brannagan blast flew over and that was it- a goal behind at the break and 45 minutes to save the season.

Step forward a United team who, to a man, rose to the challenge.

Lee had a goalbound effort blocked by Ebanks-Landell, Brandon Barker ran at defenders with increasing intent, Cameron Brannagan drove the whole team forward with a heroic effort and on 68 they were level again as their sheer intensity paid off. Henry, superb after suspension, blasted past Burgoyne for a priceless goal as Long, Taylor and a one-two with Lee set him up.

Now memories of last season’s drama came to life again. Could they recreate those scenes even without their amazing fans? Lee prodded a chance over, Ruffels headed a replica of his winner last time wide on this occasion then had a shot blocked by a defender’s heel as they threw caution to the Salop wind.

In the end it was the subs who did the trick with five minutes to go. Henry clipped in a cross, Sam Winnall got up to head skywards but it came down to Agyei who shielded the ball well, turned to face goal and buried the ball beyond Burgoyne for yet another moment of high emotion in a remarkable season. 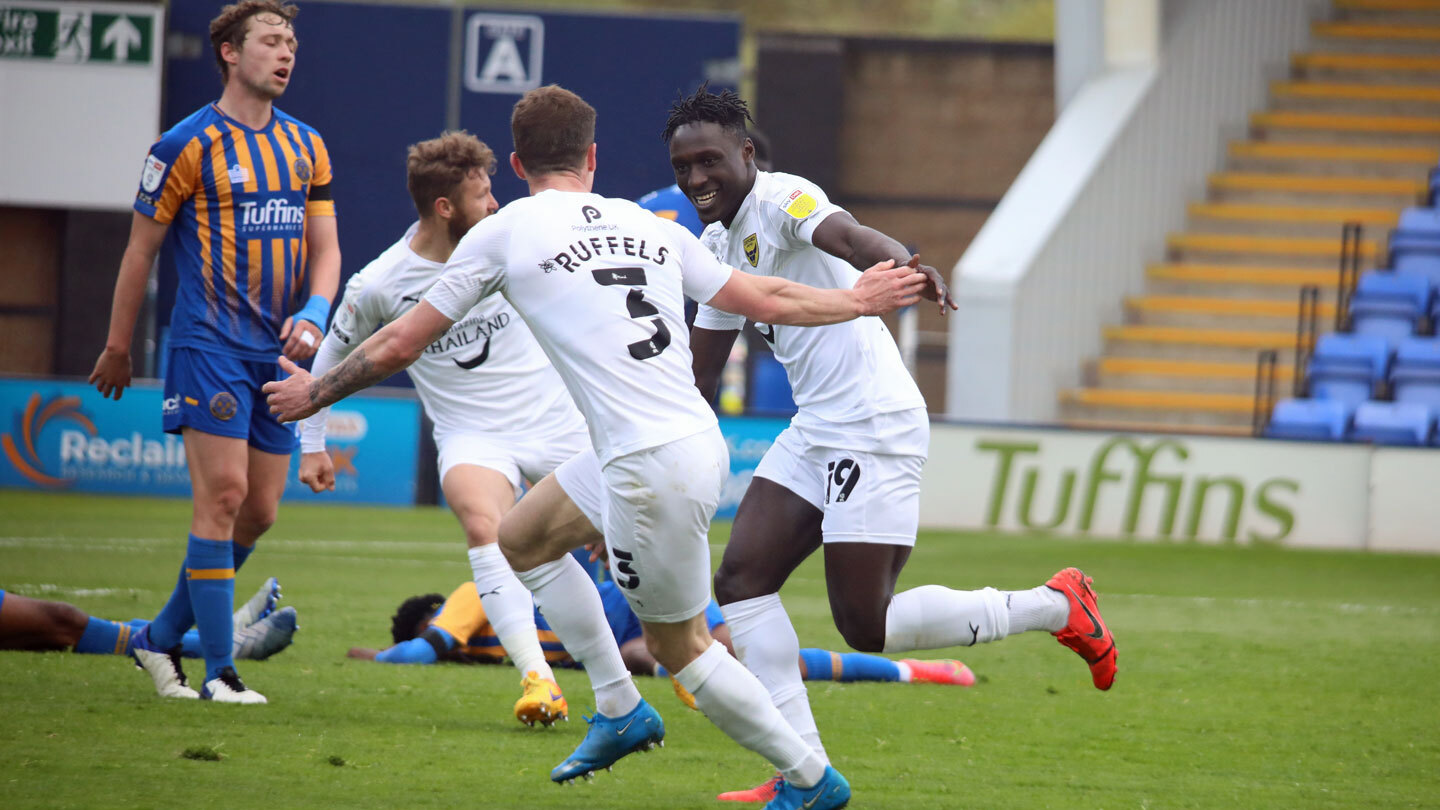 Don’t let Agyei take all the plaudits_ there was still time for an astonishing save from Stevens to push an Ebanks-Landell efffort over the bar, swiftly followed by an almost as good one from sub Shaun Whalley to ensure that the U’s take it in to the last week of the longest season ever!

90 minutes that captured the very essence of the season. Seemingly done for, stubbornly refusing to accept their fate, and ultimately triumphant.

The season goes to the last game, Burton at home on Sunday. Cannot wait…