The first meeting of the Fans Council took place this week. The full minutes of the meeting are below.

Meeting was attended by 34 supporters all of whom had expressed an interest in being part of the new Fans Council.

Andy commenced the meeting by thanking everyone for expressing an interest in the Fans Council. There has been an unprecedented response by supporters. The large to the fans council has slightly changed the purpose of the meeting. It was made clear that at this point the purpose of the meeting will be to determine how best to progress the council. It was also made clear that at this point nobody is on the Fan Council.

Andy went on to describe the aims if the Fans Council and are as follows: -

· Create one voice and unity for Oxford United

Andy then went on to describe the further role of the Fans Council in relation to the formation of new ideas, working practices and the needs of the wider fan base.

Andy then made it clear that the formation of the Fans Council is in no way designed to minimise the power and influence of other fans groups such as the supporters trust Oxvox.

Andy then introduced Ashley Browne from the Football Supporters Association.

Ashley introduced the FSA giving the background of the organisation and how it assists supporters across the country. Ashley then spoke about his role within the FSA.

Ashley spoke about the supporter engagement pyramid that underpins the different levels that clubs engage with their fanbase.

· The first level of that pyramid is Fans Forums.

Ashley spoke about the importance of the Fans Council remaining independent and without influence from the club. He said it should be fan led.

He spoke about how the council could be constructed speaking about the different ways of ensuring a decent model. It should look democratic and where possible people should be elected on to the council.

Ashley said that to ensure the council remains effective, numbers should be kept to a minimum and should ideally not exceed twelve. No hard and fast rules. Most effective councils are the ones that keep their numbers down. Fans should remember that they are there to serve the interests of the supporters and not themselves.

The council should have a certain amount of control over topics, no topic is off the table, it will be the council’s job to set the agenda for meetings.

Ashley made it clear that it is important that there is a two-way dialogue. Clubs should avoid where possible introduce schemes/projects etc without a certain amount of consultation first.

Ashley spoke about the need for constitution saying that some councils are fully constituted, some are in operation with a simple memo of understanding and others are left to run informally. He recommended that something should be documented. It does not have to be pages and pages but there needs to be a framework. Ashley mentioned that there is lots of information on the FSA website for those that wish to investigate further.

Ashley recommended that the next step will be to form a smaller working group to discuss how to best forward the plans for the council.

Ashley then invited questions from those in attendance.

Q. Graham Knight-Whiddett. Would you expect a member of the club to be on the council?

A. I do not expect anyone from the club to sit on the council however members of the club should be invited. It is also important that the agenda is published early enough for the right people to be able to attend the meeting.

Q. Pete.Could you tell us what the best council set up has been?

A. Difficult to answer however the one I am most proud of is West Ham. Has been very difficult to find something that is workable, however it is now evolving. Portsmouth has a good construct that has been in place for ten years. The have a model called the fans conference that draws on representatives from every area of the fanbase, they meet several times a year and discuss items such as ticketing, kit design and match day experience. The MD, Finance and Commercial Director all attend those meetings.

Q. Mark Harrison. Do we need articles of association?

A. Up to the council to decide. Some councils have constitution some are more informal. Advice is to have something written. There are templates on the website available.

Q. Michael. How do you suggest navigating the large amount of people that wish to be represented?

A. Can be one of the most difficult areas to navigate. Where there are significant groups looking for recommendation. Split places into two. One place allocated to each of the fan’s groups. Others being allocated to diversity places. The rest of the places can go to supporters that are elected from other groups.

Q. Mark Amos. Do other councils interact with each other?

A. As FSA there is not a specific network of club councils. We do however put specific groups in touch with each other to combat specific issues.

Q. Andy asked Ashley whether the next course of action should be to collate the names of those that are interested in being involved in the working party and forward on him?

A. That's what I suggest. If we can find 5/6 people to be involved in the working party, I will work directly with them to work through how best to from the council.

Q. What would be the best way to reduce the numbers to help start the working party.

A. I would suggest that there are only a handful of people who would have the inclination to want to spend time looking at constitution. Just because you are on the working party it does not mean that you will be on the working party. No hard and fast rule however you really need to limit numbers. If anyone on the call has any specific experience of this type of work their input would be much appreciated.

Andy Wilmer. Has recently set up OUFC Armed Forces Group. Not really a question however I feel it is important that the aim of any committee is to keep it simple.

Andy followed up by saying it is important that we get the numbers down to a workable group and there are plenty of opportunities to get involved.

Q. Graham Knight-Widdett. Is it appropriate for a member of OxVox is on the initial working party?

A. Andy answered by saying that from my perspective OxVox is an independent supporter’s trust and should remain as such. By default, there is a likelihood that members of OxVox would sit on the council or at least the working party.

Ali Woolfe: - Agrees that OxVox should remain an independent function. (The rest of Ali’s answer was difficult to hear due to poor connection.

Q. Michelle. Could you give us some idea of how much time and commitment would go into the working party?

A. Ashley answered and gave an example of West Ham that took upwards of a year however this was an extreme. He fully expects the working party to have completed it’s work in time for the council to hold its first full meeting during the close season. He would expect the people on the working party to look at documentation on the website and see how it relates to Oxford United.

There is some work around meetings and document writing however he does not expect it to be hundreds and hundreds of hours.

Q. Henry. Asked whether the number of twelve would be enough as he feels that some groups may be under-represented.

A. Andy answered by saying that ultimately the more streamlined the group the more effective it should be. However, if the process of setting up the council is right from the start, this should mean that all areas are represented and should negate any concerns.

Ashley said that it is very difficult to keep the numbers low and in a lot of cases councils break into sub-committees particularly around areas of expertise.

John Owens stated that he feels that twelve is a huge number. Said that he likes the ideas of sub committees and that people on the council can have multiple responsibilities.

Andy said that he did not want to dictate where the council goes and how it’s made up. Andy stated that when the idea was first conceived, he had one idea of how it would go however as more and more people responded it was evident that another approach was needed. At some point you need to draw the line. I just want to keep it moving and be the conduit into the club.

Ashley said that some of the best councils are the ones that plan their sessions with the clubs properly.

Q. Susan Gibbs. Thinking about disabilities, I think there is room for improvement.

A. Andy answered that all areas of the fanbase should be considered.

Andy then opened the meeting for general questions.

Q. Martin Wixey. Do you see fixed term on council?

Q. Greg David. When are the season tickets coming out?

A. Should be anytime now.

Q. Janine. Went to Blackpool match, comment to take forward, usually seats would be at a lower level. Will there be a facility to highlight special needs via ticketmaster when booking tickets?

A. Andy stated that he will speak to the ticket office ASAP.

Q. Mark Amos. Just wanted to highlight the great work the club has done, also wanted to ask whether there would be a continuation of iFollow for games?

A. Andy stated that as far as he is aware there are discussions ongoing to see what can be done however it’s likely that it will be dependent on capacities. Ultimately, we’re at the mercy of the footballing authorities.

Andy thanked those who attended

Minutes to be distributed ASAP 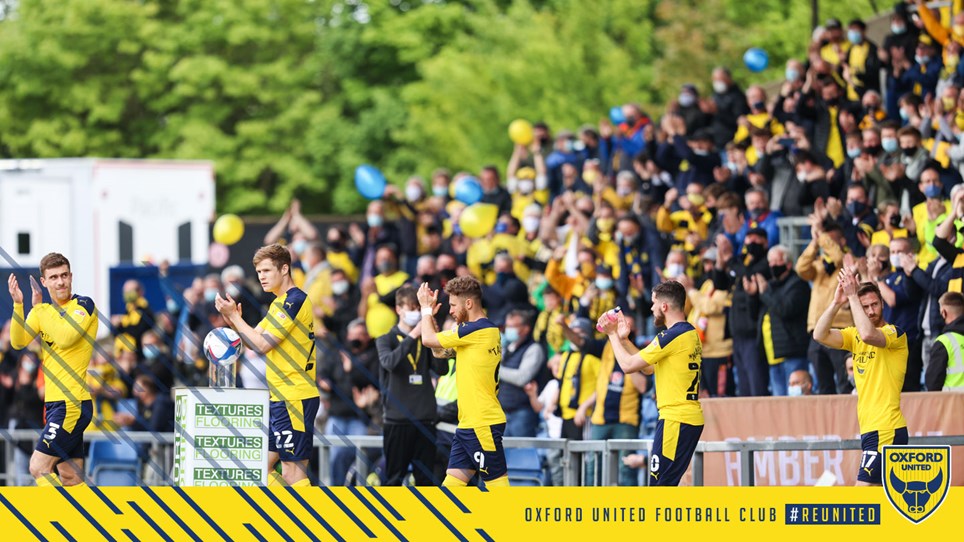 
Last night saw the very first Oxford United Fans Council meeting, hosted online and designed to allow fans to feedback to the club ideas on matchday experience and the return of fans to matches. 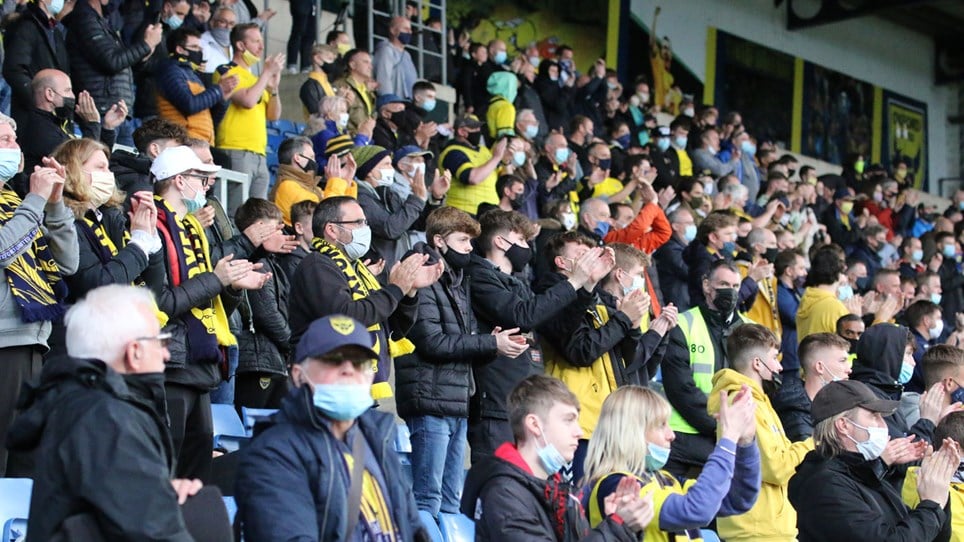 
The new Fans Council will meet for the first time this evening.