Chris Williams is with the U's this week as pre-season hits the coast...

I’ve ummed and ahhed over whether to do a ‘Tour Diary’ this year, mainly because I don’t know how many m’s or h’s there are. But in the end I’ve decided to do one just because it completes a ten year cycle since I started them in Boston, USA.

I won’t go on too much this year; four days in Bournemouth is not quite the extravagant glamour of two weeks playing Seacoast United, but I do think there is some merit in bringing you an inside track on the mood in the Oxford United camp ahead of the pre-season matches. So let’s start at the very beginning, on a Sunday lunchtime as we report to the hotel in the centre of Bournemouth that is to be our base this week.

Readers, we need to talk about Covid. It hasn’t gone away and although I won’t bore you with the fine details it still means we travel independently, we are spaced out and a little like Strictly, we test daily. It also means we are ultra cautious. One player wakes up with a sore throat on Sunday, calls the medical team and is told to stay away for a PCR test. Through team work and ingenuity the results are back by Monday morning and he can join us then. But only then.

Karl is meticulous in his planning and a team meeting on arrival outlines the routine for the week and his expectations for everyone; players and staff included. Chris Neville and Harry Routledge are new to the group and have devised a pre-season programme which will be tough but hopefully set us up for what is to follow from here through to May.

It begins at Wimborne Town FC where a dozen Oxford fans give us an unexpected but very warm welcome and the players work hard for two hours on an excellent playing surface. It’s a new stadium and very impressive with it’s 3G pitch alongside the new stands, bar and changing rooms.

I’m not going to lie: the session involved a lot of running, followed by more running, while people looked at measurements and monitors I didn't understand and checked that everyone was getting what they need from the session. 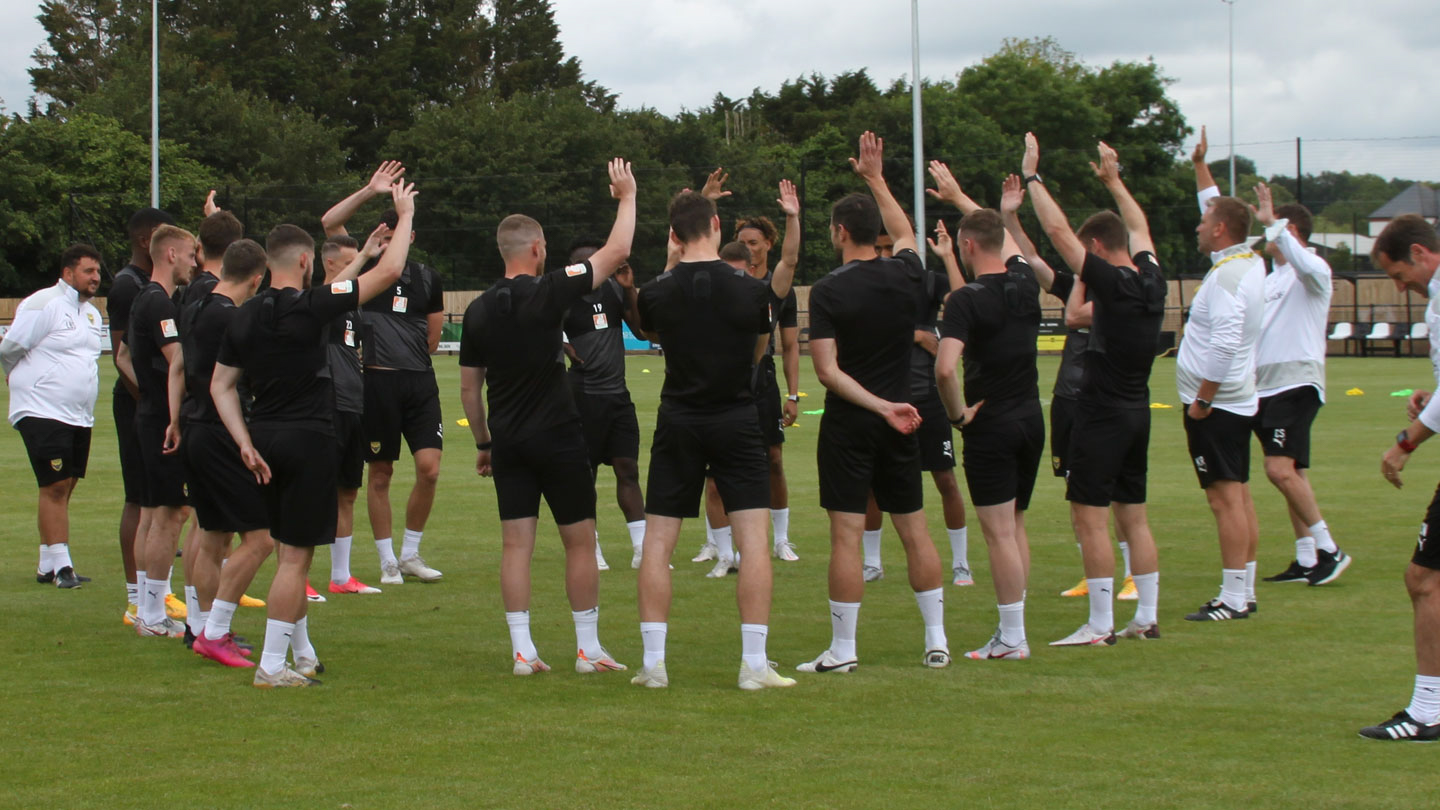 The highlight came when the players got to vote whether John Mousinho, with his PFA hat, was allowed to leave camp to go to Wembley for the final of the Euros. A sea of hands were raised - including both his own hands -and while our hands were up we all waved him on his way, meaning a space among the sofas and tables that we pulled in front of the giant TV at the hotel that night.

Players got into the spirit with England shirts of all vintages. One even wore one of his England youth caps. When Luke Shaw scored, the room erupted and the same scenes from your living room/pub were recreated in Bournemouth. Then it all went wrong and we all went to bed. Say no more.

Next morning sees everyone report at 7am for a 7km run along the beach, in the rain. That rain becomes torrential and means that when the staff get to Wimborne at 10am it is immediately obvious that we cant use the pitch. Ever inventive, on the morning run someone spotted ‘whodaresgyms’ a beach gym set up by an ex SAS officer.

We get lucky and the rain stops for just long enough for a fantastic session involving beach volleyball, gym work and yet more running, this time on the energy sapping sand. It is brilliant, ends with the entire squad in the sea, and nobody seems to notice how hard they work, yet again.

All I will say, as I sit here in late afternoon, the hotel is VERY quiet. I suspect it has all caught up on people and they are having a deserved rest before the gym session that is planned for an hour’s time.

Fear not. They will be up and running tomorrow morning…

Chris Williams is Oxford United’s Communications Manager but the views expressed in this article may not necessarily reflect those of the club. He can take the blame entirely for the terrible Tess Daly pun though.