Chris Williams writes (we'd just flick through the pictures above):

On Saturday we ran our 2010 Play-Off victory on the official You Tube Channel and thousands of you joined the fun and relived one of the most memorable days in the club’s history. That day has been written and talked about so much over the years and there are so many iconic moments from Alfie’s goal to Chris Wilder’s knee slide but I’m not sure anyone has ever previously written about what happened in the days after, so here are my vague memories of the next few days and why, for me, the best was still to come.

The problem with winning a game of football is that you are in the bubble with thousands of fans who have shared the experience. The moment you leave the ground the walls of that bubble start to erode and real life starts to seep in at the edges. A train journey home on the last train out of Wembley will see handfuls of Oxford fans still singing and chanting, next morning’s papers and TV keep the day alive, but eventually you have to accept that the day is gone.

We DID make the most of the day though. There was a party at a Wembley hotel- the club had shown remarkable foresight to book the (ironically named) conference room and there would have been a party whether we won or lost. I have been to two subsequent ones where we have left Trophy finals without a trophy and they are nowhere near as much fun. This one saw standing ovations as each player walked across from the stadium. I walked over with the Adams family, Chapman and Murray, the latter holding me back by the arm so Chappy could enter alone and get the emotional applause that his Man of the Match performance deserved.

There were speeches, there was champagne and the next day four of the squad were found asleep at the entrance to the Kassam Stadium, happy but geographically challenged. It didn’t matter. The party was still going on in a pub in Woodstock and the trophy was just about intact. It wasn’t a trophy created for the occasion, it had been recycled from a previous event but it had yellow and blue ribbons on it so that was all that mattered.

While the parties raged on secretary Mick Brown was hard at work (when is he not) organising the Open Top Bus parade for the Tuesday (hence why this article appeared today). There were two buses- one for the players and coaching staff one for the rest of the staff and families. I am fiercely proud of being on the first one and the scenes I filmed are going to live with me forever.

As I stepped on to the bus Mark Creighton was sitting in the driving seat making ‘Brrm Brrm’ noises and keen to make the wheels on the bus go round and round. He was persuaded to move along the bus please, still singing, and we crowded the top deck and waved to the crowd who had come to wave us off- many of them then legged it for the town centre to see the parade twice.

Grenoble Road was good- lots of people lining the pavement and waving yellow and blue scarves at us. ‘Will there be many in the town centre?’ Jamie Cook asked me and I turned to Jerome Sale of the BBC, broadcasting at the back of the bus, who said “there are a few. You’ll be OK...”

We went past sponsors Buildbase and got a great reception then entered a void after the Tesco roundabout before we hit the Cowley Road and the crowds started to thicken. People were hanging out of first floor windows, level with the players’ heads. Some trotted alongside, merrily running headfirst into lamposts rather than take their eyes off Billy Turley, hogging the trophy in the front seat.

Readers, there was beer on the bus. Sorry, but it’s true. By the team we crossed the Plain and got on to Magdalen Bridge the beer and three days of partying had taken its toll and Alfie Potter and Kev Sandwith hopped off in search of a toilet. Nobody noticed. But as we went past the Parks I looked down the side of the bus and there was Alfie on the handlebars of a bicycle! He had waved down the cyclist and asked for a lift, chasing the bus for half a mile while grinning and refusing to let go of his beer bottle. Kev, meanwhile, hadn’t just scored an iconic goal and so had to run instead.

He caught us just as we turned into Broad Street.

Broad Street was just a moving, swaying sea of yellow and blue. I’ve rarely seen the other CW lost for words but he was gobsmacked to see thousands and thousands of people waiting for us. There were people on the roofs, people in the windows, people climbing trees. I look at kitman Ken Ridley and grinned- last time a crowd like this was in Broad Street it ended badly for a Ridley.*

The bus ground to a halt and Master of Ceremonies Malcolm Boyden took over. His ‘I Believe’ campaign had been the soundtrack to the season and he did a fantastic job of ushering people forward to address the crowd. I believe Mr Wilder suggested that fans ‘thought we’d chucked it’, but I was too busy worrying whether the players had actually thrown Alfie over the side of the bus: he was airborne for a curiously long time! 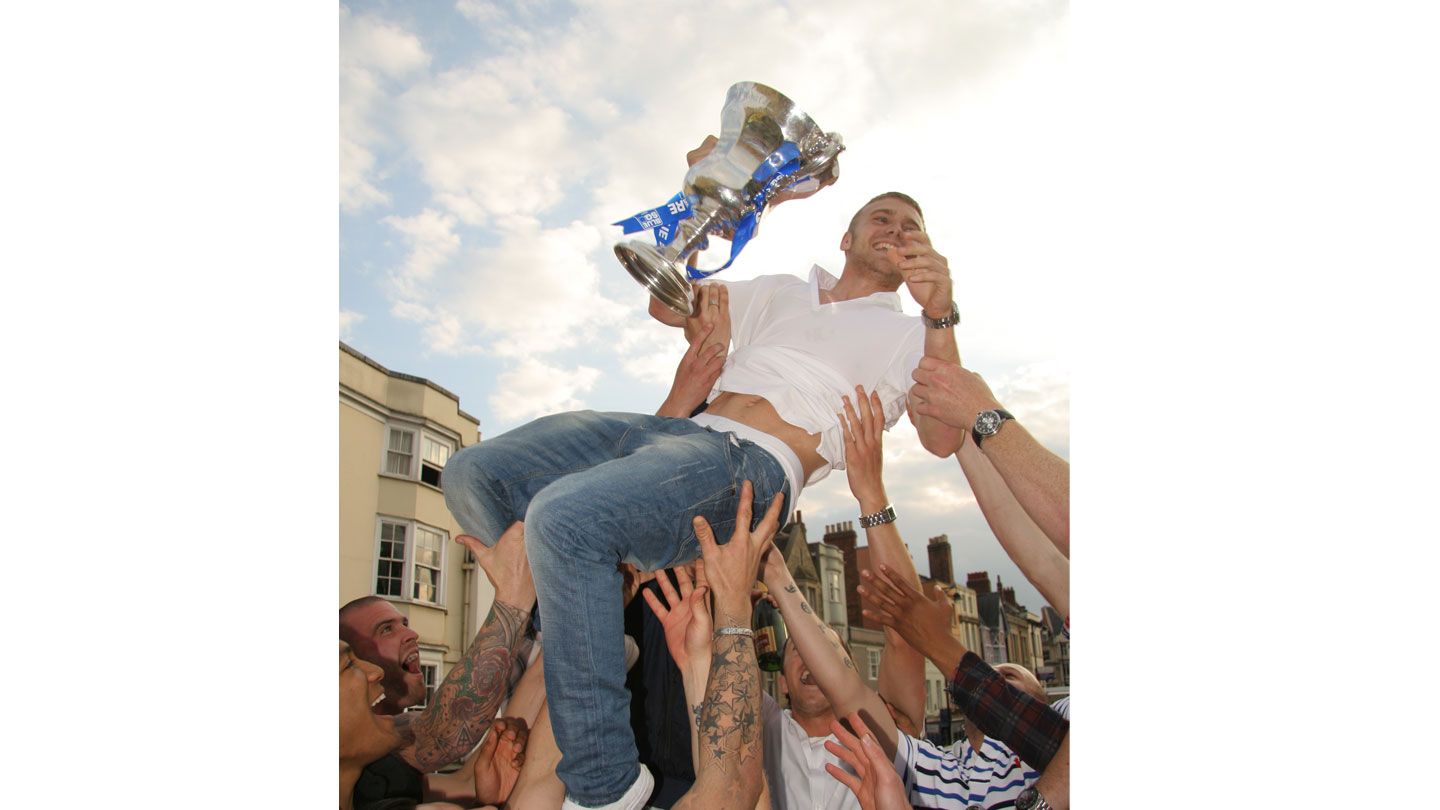 It was magic. The city of Oxford, United. Cunningly Mick had arranged for the bus to be parked across a street with no fans on and a fleet of taxis whisked us off to the Town Hall. There was a buffet, there was more beer, but I think the emotions of the last few days caught up with everyone present. Players sagged on to historic wooden benches and perhaps for the first time that bubble of elation was starting to puncture.

It took a while for real life to kick in though. So much work had gone in to that season, on and off the pitch, but the U’s were back on the coupon at last and I had finally traded trips to Histon and Droylsden for the exotic bright lights of Rochdale and Accrington.

In my first week at the club in 2001 someone had promised me a journey. I hadn’t expected it to take quite the route it did, but that day on that bus with those people will take quite some beating…

Chris Williams is the club’s Communications Manager but the views expressed in this article do not necessarily reflect those of the club.

*or Latimer and Cranmer. You don’t get this sort of stuff on many club websites do you?