Oxford United did it the hard way tonight as they came from behind to win 3-2 in Plymouth to end 2020 on a high. Trailing to a Panutche Camara goal, United roared back and goals from Josh Ruffels, Sam Long and Mide Shodipo earned them three points with an excellent team performance, despite a Luke Jephcott penalty setting up a nerve-jangling finale

There’s a new resilience of late, with four out of five games ending in clean sheets and a settled back five becoming a more cohesive unit with each passing game, but on this occasion they were breached inside 12 minutes when Argyle took the lead with the first meaningful attack of the evening.

It started with Conor Grant feeding Ryan Hardie down the left and ended when his cut back allowed Camara to blast into the roof of the net from around the penalty spot as the midfielder timed his run into the box to perfection.

United had to hang in there at that stage but were hardly swamped or penned back, even if they were not quite able to get the ball down and work it around like they like to, as Plymouth worked tenaciously to close them down and deny them any space to work.

Jack Stevens had one routine save to make from Conor Grant but was otherwise well protected by those in front of him, although Liam Kelly’s fifth booking of the season will mean he misses the game at Burton on Saturday (Alex Gorrin will be available again after missing this one for similar reasons).

United started to get on top and as so often, James Henry held the key. On Boxing Day two vital clearances off the line went almost unnoticed, this time it was his contribution at the other end of the pitch that got United back on level terms.

If you can’t create from open play then make the most of your set pieces. On 36 Henry's wickedly flighted free kick flicked off the top of a defender’s head and was knocked forward by Dan Agyei. Ruffels had gambled on the flick and showed excellent determination to force the ball past keeper Cooper from close range to make it 1-1. 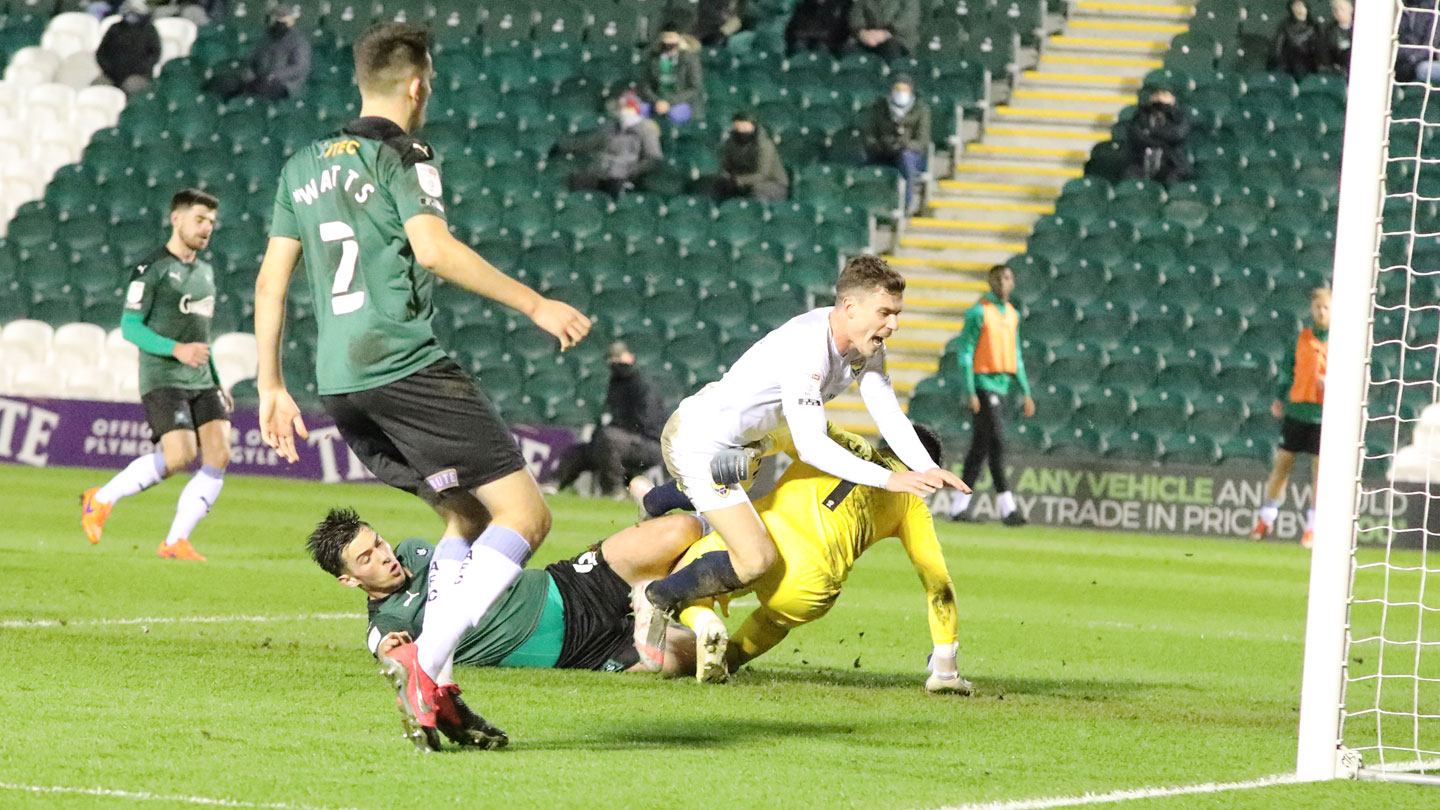 The left back almost made it 2-1 just before the break but couldn’t beat Cooper for a second time - the keeper somehow getting a knee to Elliott Moore’s follow up. Agyei blasted one final chance into the crowd and the U’s had come back strongly after the early setback. That continued in to the second half, when they controlled much of the game.

Only a header off the line from captain Joe Edwards denied Ruffels a second as he flicked a powerful header from the excellent Rob Atkinson goalwards on 67 minutes, Agyei curled a shot wide soon after and the problem with having a crowd, great as it is to see, is that you can sense when they are becoming uneasy.

The moment sub Sean Clare picked up the ball on the right you could feel the home fans fearing the worst, although quite why Long was underlapping is a mystery to all. It was an inspired move though. A low cross from Clare, a touch at the near post from Long and United were deservedly in front.

Two games in a row now where two Oxford boys have scored for their home town - even their opener came from one of the city's landmarks.

Plymouth came back at them and might have levelled when Mayor ended a good run with a wayward effort in the 77th minute, but the game looked over with eight minutes left when Shodipo made it 3-1 from the spot, picking himself up after being felled by Will Aimson for the penalty.

Game over? Far from it. There were 84 minutes gone and sub Byron Moore sprinted into the United box. Long tripped him and suddenly it was 2-3 as Jephscott smashed the ball past the helpless Stevens.

The Green Army roared forward and United had to stand firm but they did it professionally and they did it with total concentration and a shared determination. An excellent victory.

Let's face it, 2020 has been rubbish. Winning a game of football isn't all that important right now. But what we all need is that little glimmer of hope, however it comes, that 2021 will be better. Onwards. Upwards. See you next year...