Our Welsh Training Camp ends with a day that is full of laughs but also a world of pain.
6.30am and everyone is in the pool. Brothers Chris and Craig Short tower over the players like stern lifeguards, the illusion only shattered by the fact they are holding inflatable surfboards. 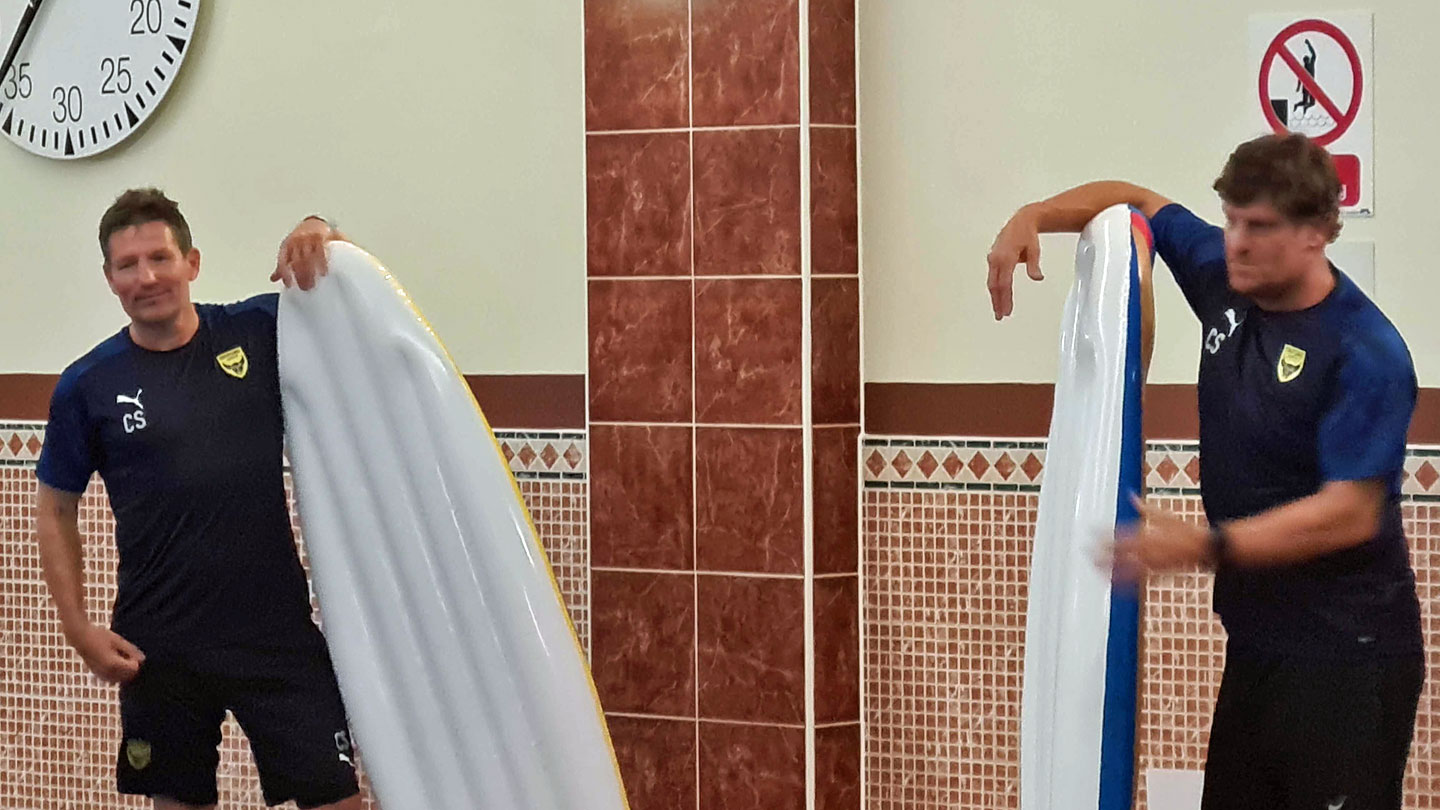 Today is going to be brutal so the first session starts with a splash. You’d think people would be eased into it but pretty quickly they are racing and pushing each other and by the time the inflatables are added to the aquatic mix the competitive spirit is really flowing. Once again we wake the entire Vale Resort as shouts of encouragement and friendly abuse echo around the pool and gym.
There is still time for comedy though. With the title on the line Taylor, Gorrin and Mousinho encourage Mark Sykes to take a flying leap on to the board to give his team the edge. As he dives full length they whip the board to the side and Sykes slams head first into the water, resurfacing to see everyone in hysterics.
Slightly undignified but good fun and surprisingly hard work. Oh, and for those who remember Malachi learning to swim in a previous Diary in Spain; it remains a work in progress.
There are some tired looking faces at breakfast but most of them know full well what to expect. It’s a last day and three sessions are pencilled in. What would YOU do on the final day? The training session on the grass is one of the toughest I have ever seen. It is relentless and the only relief is a light rain that falls from the grey Glamorgan sky.
I have to return to the hotel to announce that Marcus McGuane has signed. I leave a fresh looking group of young men and when I return half an hour later they are a spent force! They have run and run and then, just to make sure, they have run again. When I get back they are doing a drill that requires two of them to stop the other. It’s hard to stop/start all the time and they are pushed all the time by the coaching team.
Next up is some football, then back for ‘Gates’; running around a course and through cone ‘gates’ while staff keep count. I am involved and dock Sykes one just to annoy him, then count a hugely impressive tally for the hyper-fit Sean Clare.
A bit more football then a ‘Sword Run’ finish for one last big effort. “Well done lads” says Karl “Let’s go and have some fun”.
Now, readers, fun to me suggests a couple of cold beers at the cricket. Apparently for Karl it means running up a near vertical sand hill. The images don’t really do it justice: there is a 'warm-up hill' and then a ski slope made of sand. Lactic acid is the enemy and the players get half way before their legs start to seize up. Not since Hugh Grant went up a nearby hill and came down a mountain have I seen anything so wooden.
I have a new role as ‘Starting Post’ where the players have to come half way back down to me and then race back up. Then Karl shouts ‘All staff to the top please’ and up we struggle so the whole group can stand, together, united at the top of the world*. 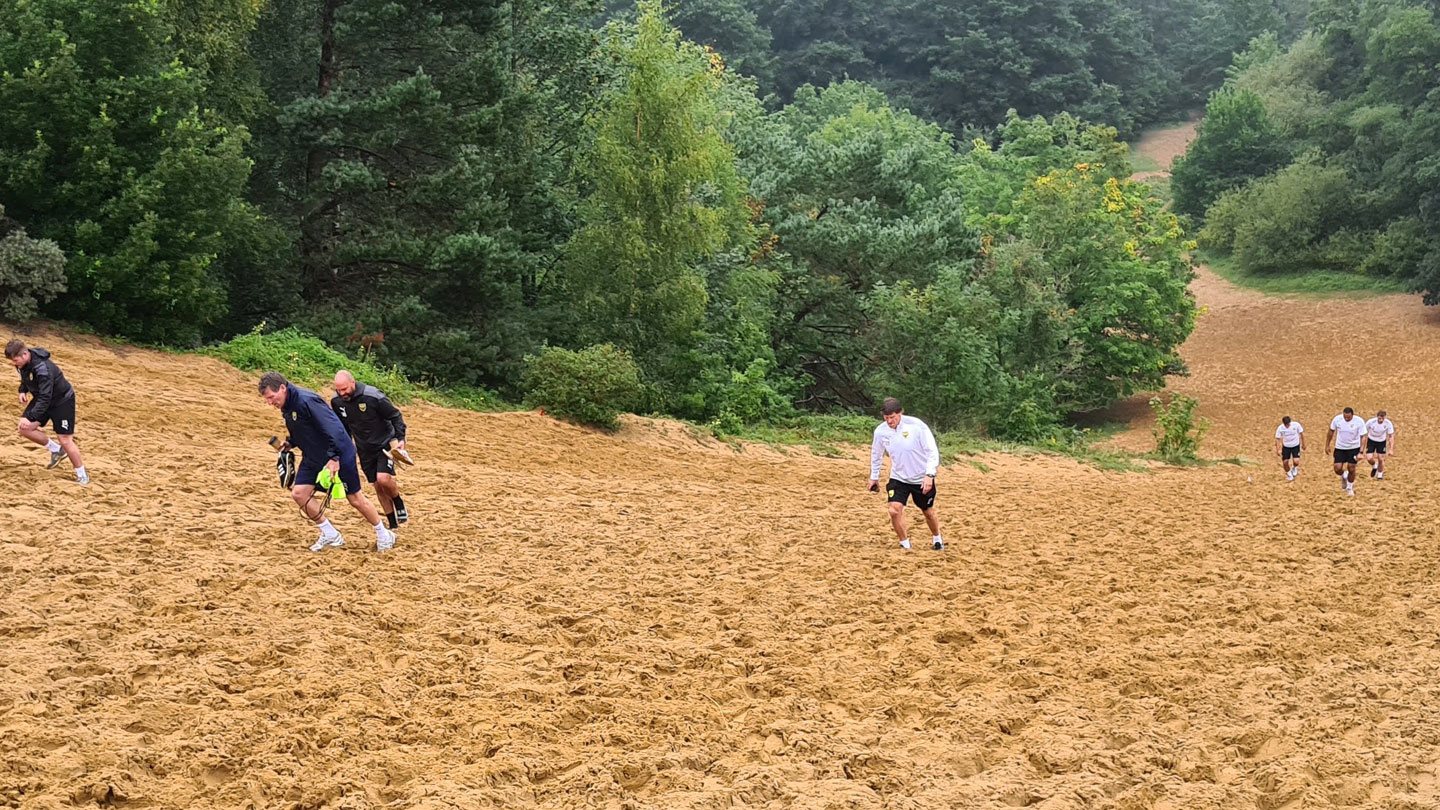 Like this climb, the players have completed their Training Camp without complaint and have carried each other or encouraged those around them on the way up. It has been beyond tough but they still face a terrifying last task: a General Knowledge Quiz tonight
I’ll end with a couple of thanks. If you’ve read this far then I thank you and ask you, when we return, to read the programme. It’s such a labour of love and if you like this sort of article then they are much more likely to be in the programme, where they truly belong, than online.
I want to thank the staff, who are amazing. You will struggle to meet a nicer bunch of people and they genuinely wear that badge with pride. I have stumbled down at 6.15am every day and they have all been there before me. Today after Hell Hill two of them raced up it again. Just because.
My thanks to the Vale Resort who have made our stay so simple. It’s not easy to deal with the needs of a professional football club but they have been spot on.
And the biggest Thank You goes to the players because you have given your all. You have toiled in the sun, run in the rain and whenever I have poked a camera into the mix you have smiled and accepted it. This is a good group. A few new faces, a fresh approach and the ultimate motivation of going one better…
Thanks Wales. It has been a blast but as Sir Tom says, it’ll be good to touch the green green grass of home. Let's do what we do best. Let's play football...
Chris Williams is the club’s Communications Manager but his views do not necessarily reflect those of the club’s