As both regular readers will know, bad things tend to happen to me on tour. Whether it is flooding bathrooms in Portugal, being attacked by a German Shepherd in Austria*, or being thrown in the sea in Ireland** for smiting John Mousinho’s ropey bowling for six, something always seems to happen. This morning at 6am I came up with a cunning plan. “Which way are they running, Faz?” I asked “ I will get en route and set up the camera so I can film them somewhere more scenic than the car park”. And lo and behold five minutes later half the squad emerge from a hidden exit twenty metres behind me and I miss the whole thing. 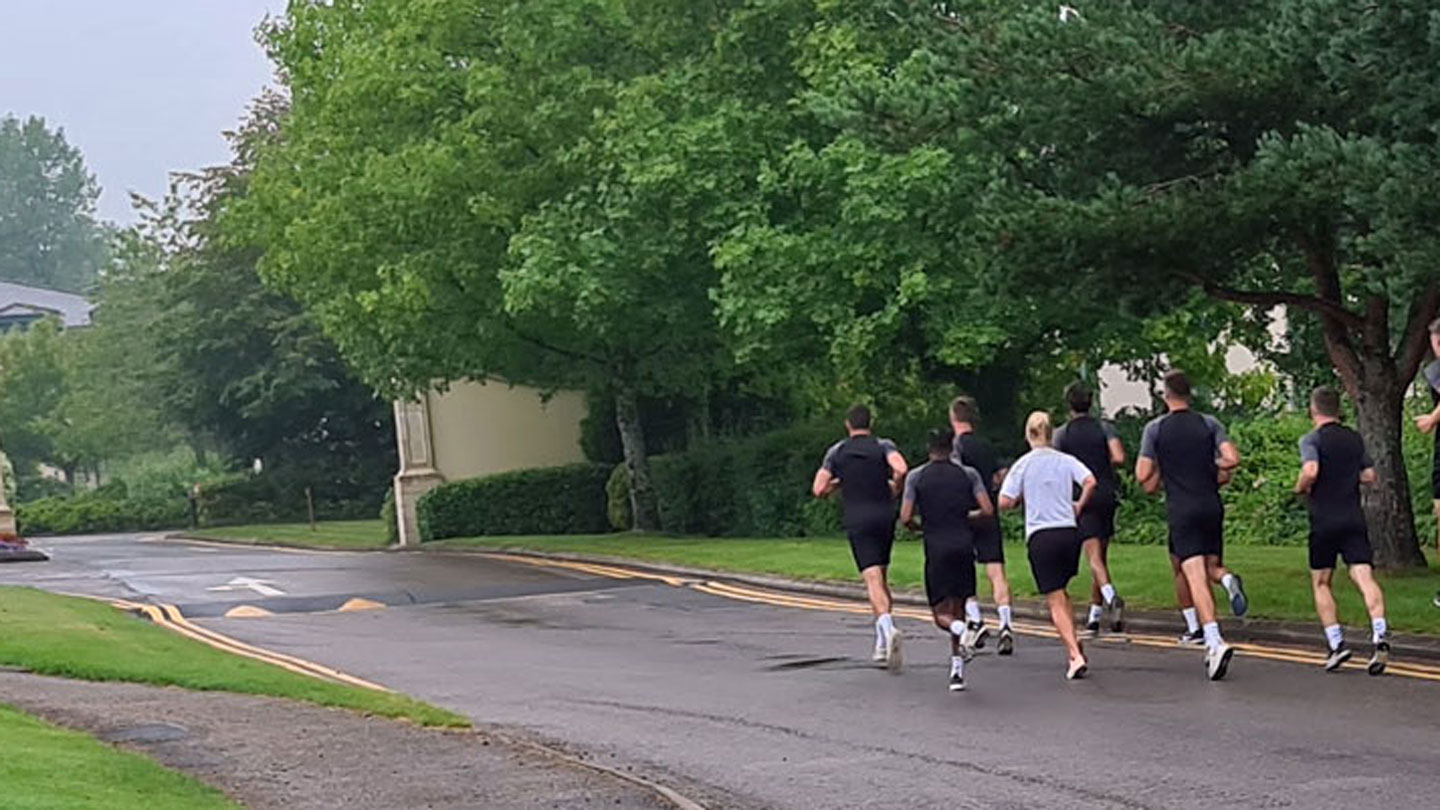 I content myself with filming the Head Tennis where the spirit of McEnroe lives on and line calls are disputed at a volume that wakes the whole valley. Not since the Manic Street Preachers*** has there been such a terrible din round here. The two groups switch activities and good fun is the order of the day before breakfast is consumed, fresh training kit is donned and the second big session of this Training Camp gets under way.

Yesterday I wrote about the staff but I am aware that most fans are slightly more interested in the players. It’s harder to write about them for me because pre-season is more about fitness than performance and I don’t want to build expectations too high. Maybe I’ll just mention that the extraordinary Mousinho is a much better athlete than bowler and his mantra of ‘it’s just a number” is certainly true- there is no need to mutter it to me every time you pass me, Mous. They won’t thank me but Malachi Napa and Rob Hall also catch my eye: fans rightly love them because they are good guys but there is a steely determination and both of them have performed admirably over the past 48 hours (there are interviews with both in iFollow now).

The new boys, Joel Cooper and Sean Clare, are both strong runners and have fitted in quickly- Joel has an ally in new dad and countryman Mark Sykes but there are no obvious cliques or divisions anywhere, just that first slight buzz that you get from a team on the very first steps of their journey.

This morning’s session is brutal once more. “This is the least disguised running you will ever see” Karl tells them as they go through a series of runs and exercises, although today there is a ball in everything except the very final energy sapping run which is just up and down the pitch in a line, over and over.

I am exhausted just from watching and I’ve only done half my job today. Kitman Jonny Edmunds steals my camera and assumes the role of photographer. That’s fine by me until the session ends and I have to go through 1,266 images he has taken! Honestly, that’s quite a lot, don’t you think? Even if I didn’t have to edit them all to get rid of evidence of new signings! I’ll be honest, there are now three players here who we can’t name for various reasons. I’d love to but things don’t always happen quickly and I’d be silly to give further clues: sorry folks.

It means a long afternoon for myself and Head of Recruitment Mark Thomas as we try and make things happen but by 5.30 it is obvious our days are done and so we have a cuppa and make our way to the gym for the third and final session of the day. There is a surprise in store because Olympic athlete Darren Campbell has come along to take a look and offer advice from a safe distance. 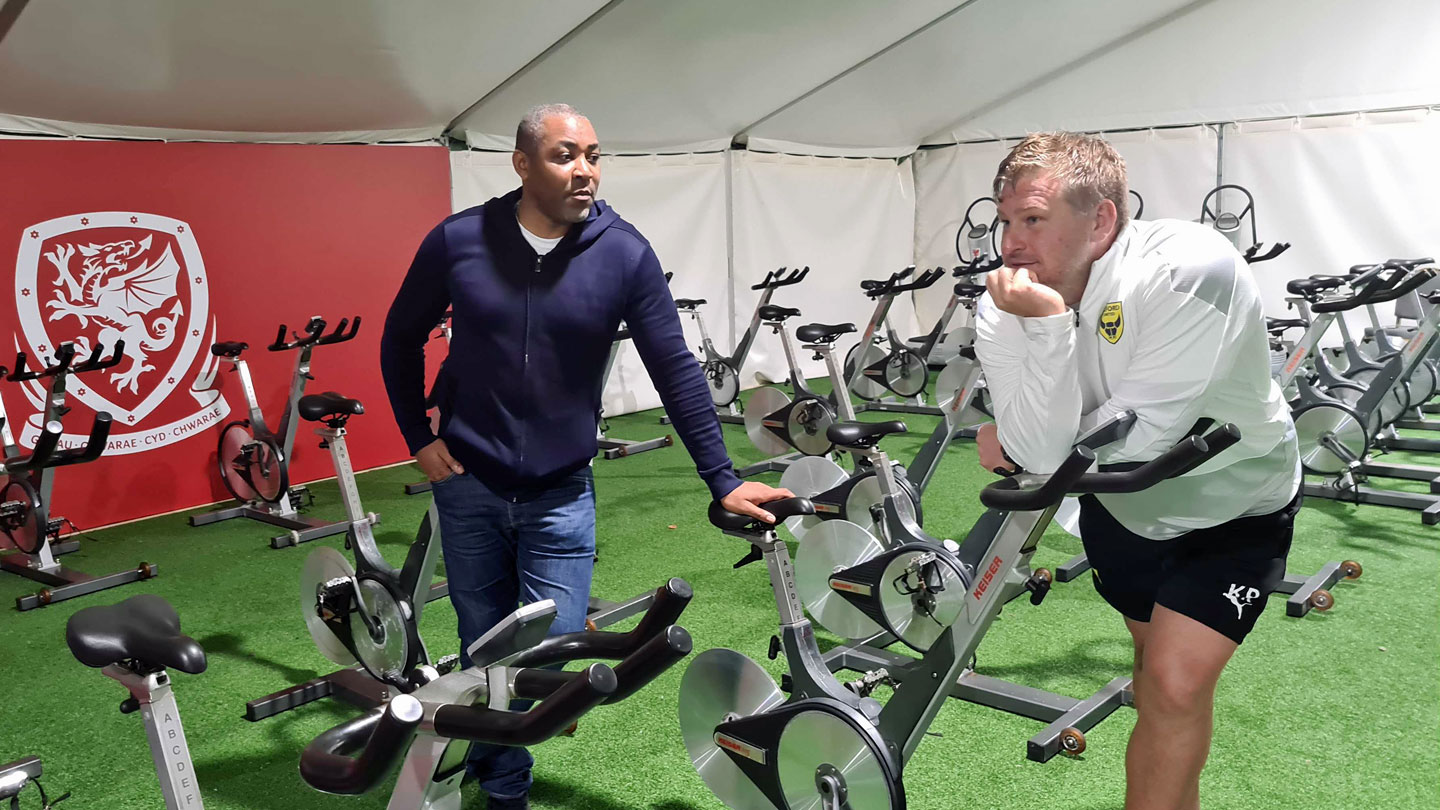 Then it’s back for a 7.30 evening meal and then, I would imagine, an early night again. Usually the staff will have a beer or explore the local towns but this year it hasn’t been possible. As I left the dining room just now people were gathering round the TV to watch the football. We are closer to home than ever before but the space in which we operate has been constricted and our south Wales bubble remains intact.

Another good day. Another serious amount of hard work and bit by bit things are coming together nicely. Plus, for once, I know what is planned for the morning. Stay tuned folks, tomorrow is going to be a GOOD day. Imagine how many pictures I’ll get…

Words by Chris Williams, the club's Communications Manager although his views do not necessarily reflect those of the club. Pictures by Jonny Edmunds.

* a dog, not a real Shepherd

** with my new phone in my pocket