In our weekly feature Chris Williams heads down Wembley Way

My first few minutes of Milk Cup Day 1986 were slightly disturbing. I was alive- which was good, but I was neither at home or in my students digs in Tottenham. Which was bad.
I had a headache and somewhere in the back of my head I remember the phrase ‘let’s celebrate now because we won’t feel like drinking if we lose’. That was a good theory at the time, but the pre-match celebrations gradually came back to me. We had been in an Irish pub in Southall and we had done little to ease the friction at the height of the Troubles by dancing throughout the Irish National Anthem, which I had mistaken for the Pogues' new single. There had been a spot of bother with a girl who had hair growing from the wart on her chin- I had asked if, like Jeremy Charles, she was growing the beard until we lost in the cup.
Slowly my life swam into soft focus. I was at my friend Andrew’s house and all was well. I was pre-dressed for Wembley in my yellow Wang shirt and bleached Levi 501s. Get me a cup of tea and get me on the road.
We took a 207 bus across West London and travelled among the QPR fans. In those days you didn’t wear your colours so my stylish red and white plastic baseball jacket was zipped to the neck, although this was rather ruined by one of our party wearing a horny Oxford hat. “Take that off or you won’t make it past Shepherd’s Bush’ someone whispered. The Rangers fans were in great spirits. In their semi-final they had beaten mighty Liverpool thanks to a Michael Robinson goal. They had done the hard part. Now all they had to do was beat little Oxford.
The U’s has beaten Aston VIlla en route to Wembley- a Mark Walters goal towards the end of the second leg at the Manor had sparked genuine nerves among the home fans and the last few minutes had been unbearable, but the players had held their nerve and now we were going to have our day in the sun. Wembley. Oxford United. Even now I can’t write them in the same sentence.
Those nerves were still there as we stepped off the bus and walked slowly through the toffee wrappers and this morning's papers on the grey uninviting streets of Wembley. Modern Wembley Stadium has a huge array of overpriced eateries and watering holes but the old stadium was less user friendly and I vividy remember Oxford fans circling the stadium and looking on in awe. Many of us went in to the ground way too early to soak up the atmosphere. At Wembley in those days you often soaked up the consequences of a lack of toilet facilities, but so what- we were turning the stadium yellow anyway: we used to find phone booths. nick the Yellow Pages, shred them and throw them in the air as the team came out to a ticker tape welcome .
I stood with a couple of mates but with no mobiles it was hard to meet up with your usual football fwiends. My vantage point was up to the left as you looked up from the pitch and I remember the Oxford end being full before the QPR fans were in. The pubs were packed- my inebriated parents had to run to make kick off and were amazed to be running towards the turnstiles alongside injured left back Bobby MacDonald! My mum outpaced him.
There was a celebrity game in which only Bobby Moore and Jimmy Hill knew how to play and Jimmy Tarbuck and David Frost captained teams including Cannon and Ball and Denis Waterman. A poor PA meant we had no idea who anyone was or what the score was, but it helped pass the time. It wasn’t until the proper teams walked out below us, led by Jim Smith and Maurice Evans, that things became real. Oxford United. Wembley. Amazing. 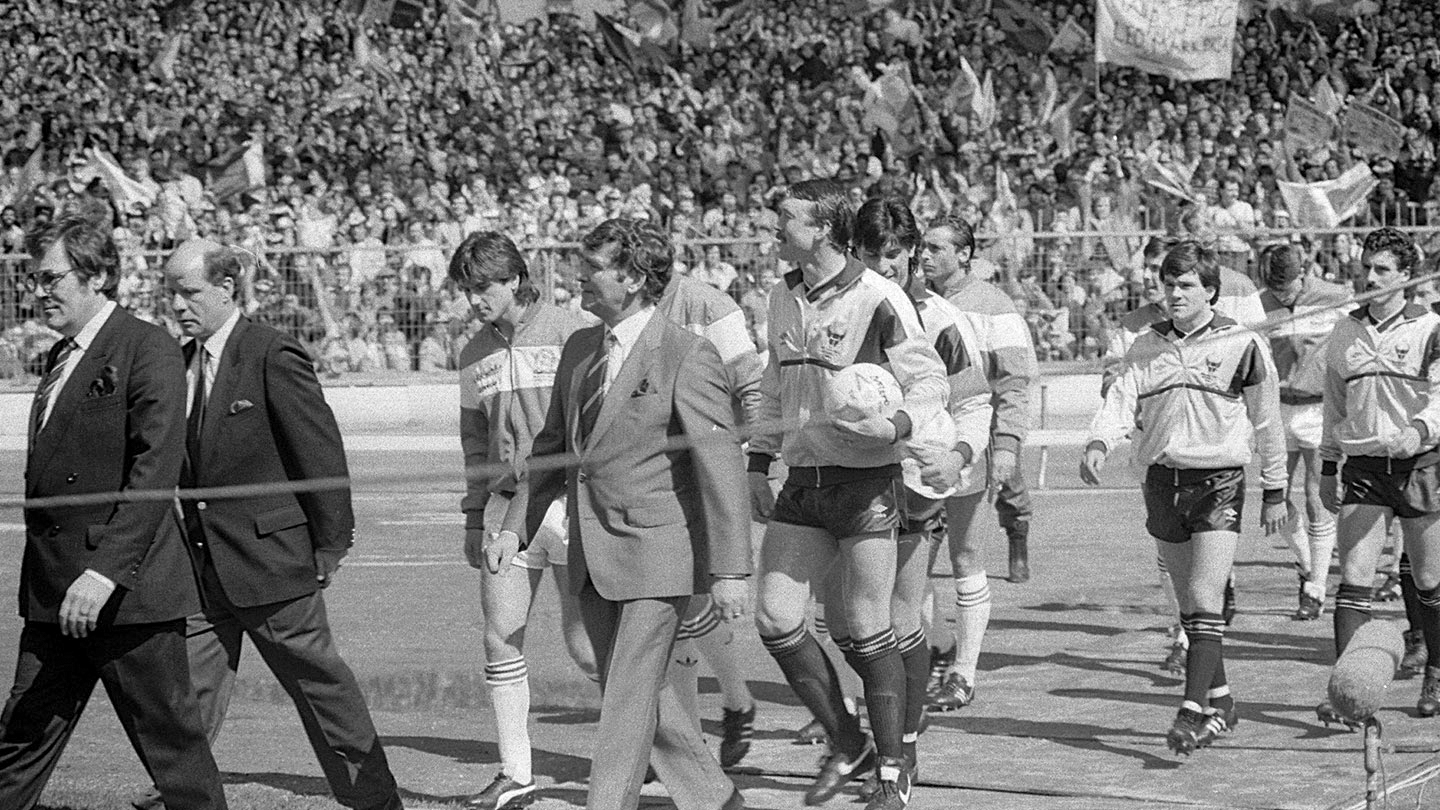 The first half hour was tense beyond belief. Neither side really threatened and I remember thinking that if we got to half time at 0-0 then we would be fine because we would be shooting towards our own fans after the break and it would be like at the Manor where we were always better that way.
Then Trevor Hebberd ran free and I watched him go too wide as another attack petered out. But suddenly, with a slightly ungainly flick, he was inside Alan MacDonald and in a shooting area. He didn’t catch it cleanly but that seemed to fool Paul Barron and the ball squeezed between the keeper and the near post. We were at the other end and for a couple of seconds nobody dared celebrate, but then Hebberd was running away, arms aloft and we were 1-0 up. Could we?
The half time talk was all about whether we would be able to hold on. Surely QPR couldn’t be that bad after the break- we knew that Jim Smith would get into them and get them going.
But that never happened.
Seven minutes into the second half and United broke from half way again, Houghton and Hebberd swapped passes and the Scottish Irishman from London was sliding the ball home for 2-0. This time it was easier to celebrate and now United settled into a rhythm that was a joy to behold. Gary Briggs and Malcolm Shotton were the rock on which the whole thing was built, Alan Judge doing all that was asked but rarely troubled. David Langan, inventing wing-back, sacrificed a little of his marauding style for the sake of solidity while on the left John Trewick, usually a midfielder, did great work in allowing the magnificent midfield of Houghton, Hebberd, Les Phillips and Kevin Brock to torment Rangers who went with a whimper.
John Aldridge had a chance but missed and then when presented with another opportunity forced Barron into a save but only for the ball to run for Jeremy Charles who scored the third and won the cup for the U’s. I looked at my watch. 100 times. There was definitely still time for a comeback. Even on 89 minutes I was nervous, but when ref Keith Hackett blew for full time there was a wave of relief from the Yellow Army.
We knew how good our team was, but now the world knew it too. That afternoon was the climax of so many cup exploits- Leeds, Newcastle, Man United, Arsenal. We’d always believed it was the Manor that did it, now we knew that it was the players.
There were hugs and laughter (nobody had invented high fives) and much standing on tip toe and weaving to see the presentation through a sea of flags and banners. What a game. What an occasion. What a team.
It’s not reported much but there was trouble on the tube on the way home. Most Oxford fans went west but on the train east the emotions got a little carried away and I kept my baseball jacket very tightly zipped until I was safely back on Tottenham High Street and close to home. Jacket-free I walked past White Hart Lane and had a beer in the Bell and Hare pub, a Spurs haunt. Noting my Wang shirt, the barman said ‘Oxford?’ ‘Yes,’ I nodded, fearing ejection. ‘You were brilliant today. This one’s on us.”
Oxford United have been to Wembley four times and I have been there for every one of them. Wembley 2010 was amazing- to be working for the club by then made it unforgettable. But 1986 was OUR day. Those who never thought it could happen.
The height of the Golden Years, the peak of by far the greatest team the club has ever seen…. 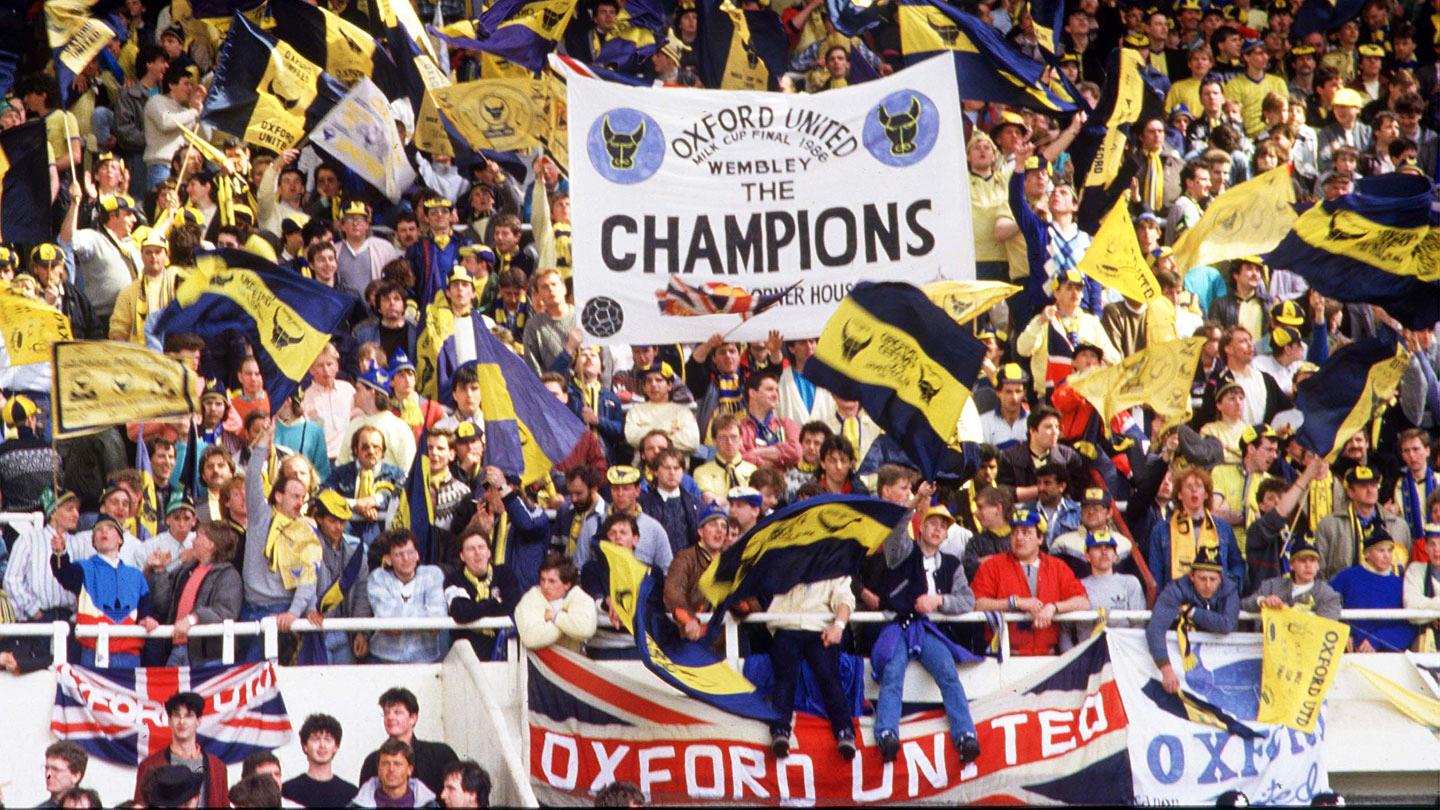 Chris Williams was a fan in 1986. he still is. Views in this article are his own not necessarily the club's. Other than the view that we were very good that day