Simon Eastwood was the hero for Oxford United as the U’s reached the quarter finals of the Carabao Cup with a penalty shoot out win over Sunderland last night.

But United’s Number 1 confessed afterwards that he might not have been able to take his place between the sticks after a pre-match virus:

“I’ve been a little bit poorly this week” he told iFollow. "One of my little girls has been ill and she passed it on to me so I wasn’t feeling great but I managed to get through it and play through it and luckily everything turned out as it did.

“I didn’t think we were great in the game itself, certainly not at our best and Sunderland probably should have beaten us in the 90 minutes: we were a bit lucky to get to the penalty shoot out in the end but then it’s a bit of a lottery. Luckily tonight we came out on top.

"Sunderland had shouts for a penalty late on but we might have had one much earlier in the game. But as a whole it is great for the club to get through to the quarter finals of a big competition- great for the players but also for all the staff and the fans.

"I’d like a big team next, personally: I think most of us do, but you could flip that as well because the semi-finals aren’t that far away now.

“I like this competition though. Going straight to penalties is exciting for the fans and I thought our fans were brilliant tonight. We thank them for coming along and making it a sell out and whether it’s a home or away draw we know we are going to have a massive crowd behind us once again.”

The draw for the quarter finals takes place at 8.45am on Thursday morning, live on BBC Radio 2. 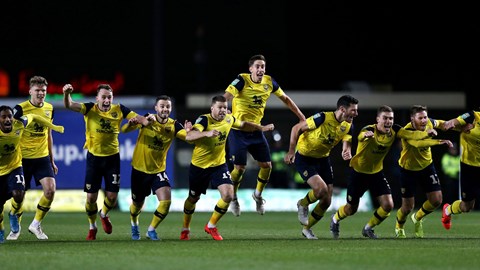