TEAM NEWS
The U's welcome back Cameron Brannagan after suspension as they take on Gillingham but the midfielder may need to be patient after two wins in the last two games.

A sickness bug earlier in the week seems to have cleared up and there was a full bill of health in training yesterday other than long term absentees Rob Hall, Jon Obika, Malachi Napa and Shandon Baptiste.

See Cameron Brannagan and Karl Robinson previewing the game in iFollow where we also have a great chat with John Mousinho in the Preview Show plus a frankly baffling explanation of statistics from First Team Analyst Dan Bond...

“No, he won’t be fit for Oxford" Lovell told the Kent Messenger.

“With Ricky, it could be that all of a sudden he’s right to go but it’s an injury we’ve really got to be careful on and make sure he’s 120% right to play because we don’t want him to have a recurrence. I think he might have thought of the Oxford game but we weren’t too bothered when he came back, just as long as he comes back fully fit because he’s a quality player and we’d love him available for selection.

“We’ve still got 11 games to go, so hopefully we’ll see him in a Gillingham shirt pretty soon.”

"I think we’re playing well at the moment" Lovell added. “We’re all enjoying what we’re doing and I think it’s quite settled. Supporters will look at the table and think this one’s really important but I think they’re all just as important and any wins you can pick up will be crucial." 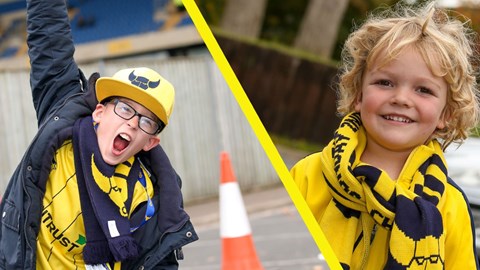 This game is not all ticket but all prices increase by £2 on the day.

Tickets are on sale but cannot be posted as Gillingham cannot duplicate any tickets if not received in the post.

They are therefore available online from oufctickets.co.uk and by phone (01865 337533) but will be COLLECTION ONLY, either from the OUFC Ticket Office before 3pm on Friday or at Gillingham, turnstiles 14-17 at the away end on the day.

We have tickets for the Brian Moore stand, uncovered behind the goal, which has a capacity of 2,200.

We also have 200 seat tickets in the Gordon Road stand, which are only available to season ticket holders in person and on the phone (ie not online).

* with valid NUS card (take on the day)

** one free with a paying adult

Gordon Road Stand (Season Ticket Holders only) Covered on Side

* with valid NUS card (take on the day)

** one free with a paying adult

Under 14s must be accompanied and no alcohol is permitted on the coaches. Call 01865 337533 or visit oufctickets.co.uk to book

Hear the whole game live in the UK and see it if you are abroad in iFollow.

THE PLAYLIST
Want to get in the mood for the game? Then search for Oxford United Official on Spotify where we bring you a new playlist for every away journey, plus the dressing room playlist...