When I started working in football 20 years ago pre-season was a load of barracks and assault courses. Other than a directional malfunction that took us to Calais when we were playing Dover in the FA Cup I hadn’t been abroad with the U’s until we went to Boston in 2011. Nowadays everyone is at it. Mansfield are up the road from us here in Carvoeiro and played Rangers last Sunday. They play Swansea here on Saturday and when we fly out on Friday Rochdale will fly in to replace us, with Sunderland next through the Arrivals gate.

The other night I was talking to one or two players who were pondering whether staying at home is the new abroad? Why go to all the expense of flying 30 odd people to the Algarve when you have a beautiful training ground anyway? It’s a good point but my answer is simple. Here, the squad report at 7am for a run, have a morning training session and then a rest before the gym part of their day. Yes they could do that at home but then they wouldn’t have the medical and sports conditioning team on hand for rubs, remedies and advice 24/7. They wouldn’t have instant access to their data plus who knows what they would be eating and drinking? Tired minds do tired things sometimes.

But perhaps the biggest reason is the team bonding part of the trip. This week you can see who is always early (Alex Gorrin!), who the leaders are, the jokers, the moaners, and who gravitates towards who. The younger lads like Sam Allardyce, Kevin Berkoe, Fabio Lopes and Nico Jones are new to this and new to how Oxford United is run. NOBODY is late. Ever. The very highest standards are expected at all times. There is total discipline and a club ethos about how things are done.

That doesn’t mean it’s dull. Far from it. I have laughed myself silly at some of the antics this week. I don’t think they even know they do it but if you walk in to any room or board any minibus, there is always someone singing under their breath. Nobody is self conscious about it. It’s not just the players; the staff are it it all the time too and the songlist is staggeringly wide. My favourite was Little Big Sam with Vanilla Ice’s song ‘Allardyce Ice Baby’. Genius!

Today started with a very early morning walk before a ten minute drive to the training stadium in Sesmarias. The sun hadn’t burst through but that just meant higher humidity and what I think was the hardest session of all. That would be logical because we play Glasgow Rangers on Sunday so the next couple of days will be less labour intensive I would think.

I watch from the shade of the main stand and observe a drill where the players, in threes, pass the ball across the pitch for one third then have to sprint the middle third before finishing the move with a goal at the other end. ‘The fact you have a ball should not trick you into thinking this is a football exercise’ Karl bellows in that unmistakable Liverpool accent. ‘It is running, with a little bit of football to make it a little bit more interesting, and it is going to hurt’. 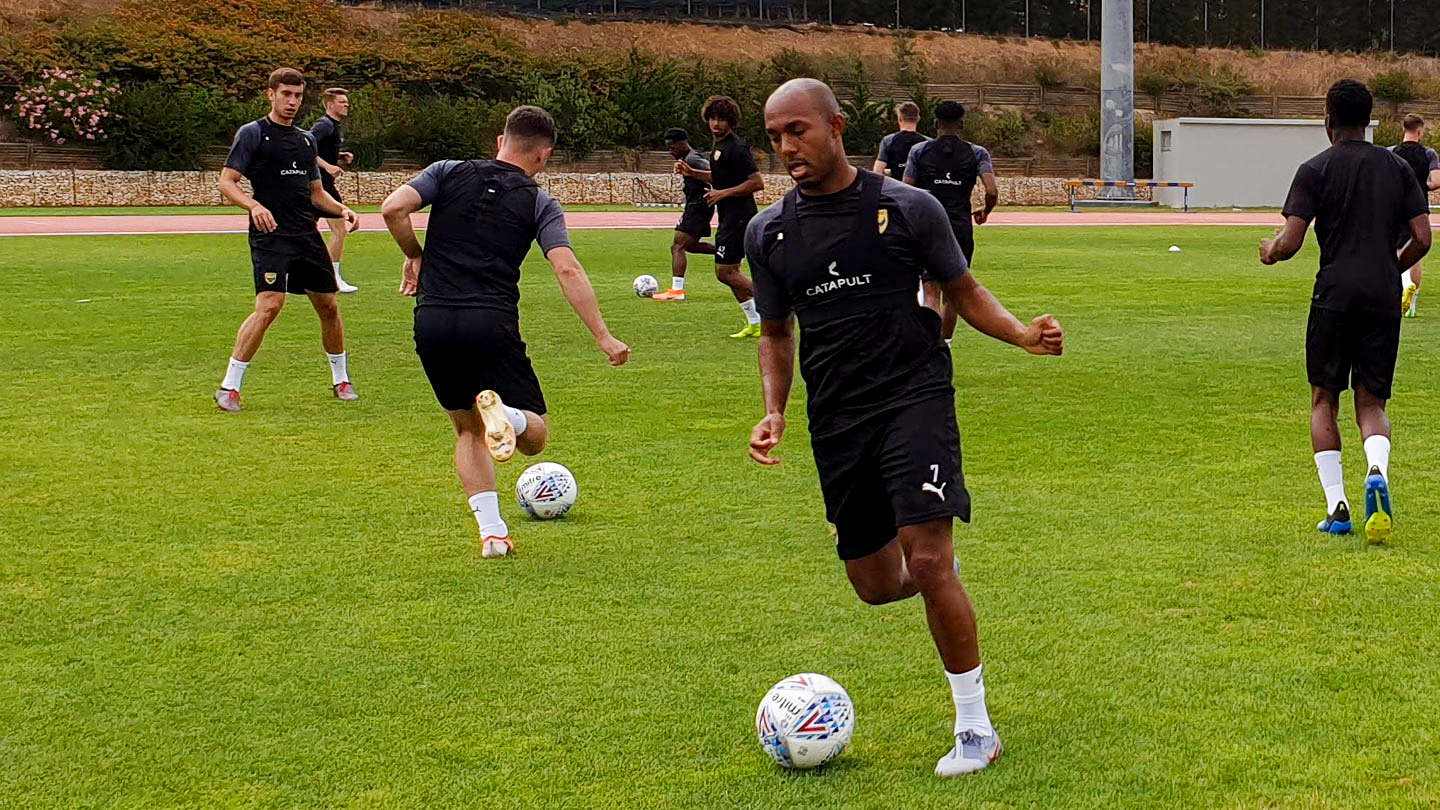 He’s right. It is painful to watch and made worse by the fact that when they reach the end of their runs and the lactic acid is biting into already fatigued muscles they still have to try and beat either Simon Eastwood or Jack Stevens! The keepers are not going to take it easy and they make save after save, which amuses me greatly. John Mousino scores a worldy and celebrates to the empty stands as though he has won the World Cup.

I grab interviews and equipment then it’s back for lunch and the chance to write up stories from home- we play at City, Thame and Brackley next week which kind of brings home the fact that the season is almost upon us.

The core strengthening session ends around 6.30 and then it’s time for some dinner before the players crash for the evening; Love Island Time as it seems to have become. Staff gather for meetings but there is one last chance for mischief. Chris Short has been craving cake all week and has secretly convinced the waitress that it is Derek Fazackerley’s birthday. Our slightly confused First Team Coach smiles nicely while the cake is wheeled out, candles aflame and the entire squad sings Happy Birthday to him. The cake even says ‘Happy 80th Derek’. It is not even remotely near his birthday but the cake is very nice. 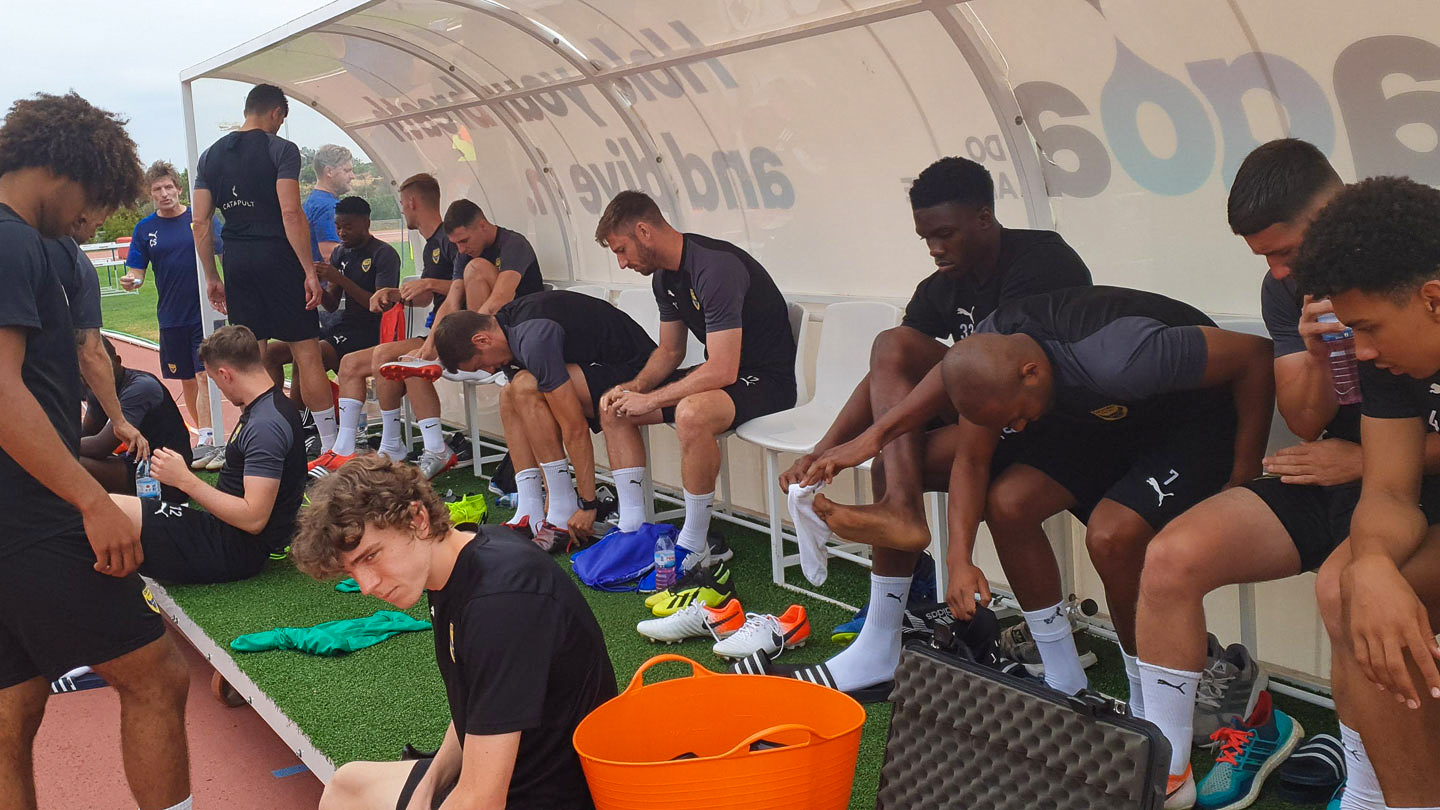 It’s a good way to bring the curtain down on this week’s Tour Diary. There is a day left but I will write that in a future match programme for those who care about such things- logistically it will be a nightmare to get it done before we fly up to Glasgow from Faro ahead of the weekend.

I’d like to end with a personal thank you. Not just to both people who have said they enjoyed reading the Diary but to all the staff and players who have shared the week. I’ll be honest here. I am NOT part of the crew. Watch that drone footage from training: there is a huddle and all players and staff are in it. I am a yard off, taking the picture. That is how it has to work: I am with the squad, not in the squad. So to be made so welcome and to see this year’s squad starting to gel has been an absolute pleasure.

There will be new faces and who knows what awaits us this season. All I know is that I can’t wait for the adventure. Get me to the airport. We’re Oxford United. We’re on our way back… 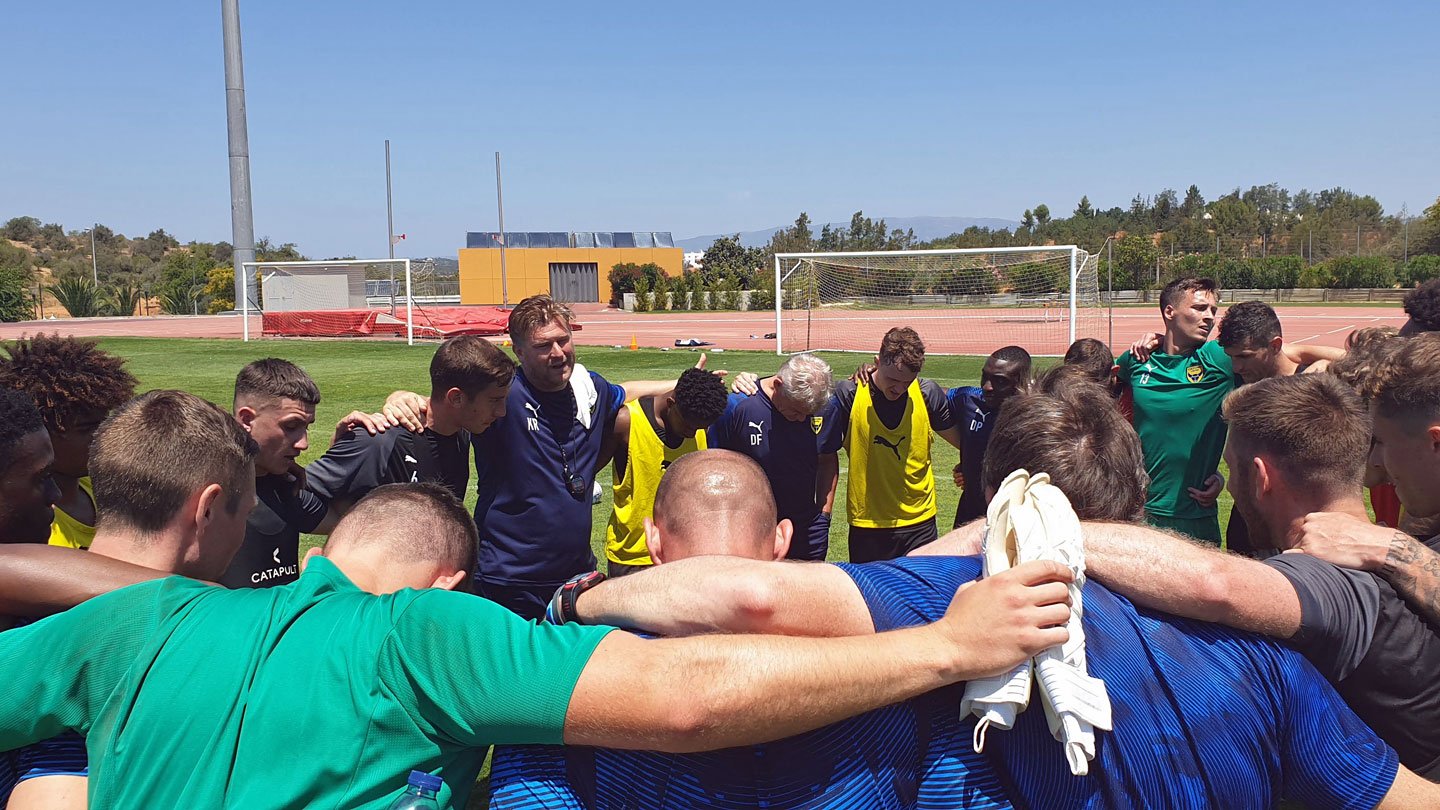 There have been regular video exclusives in iFollow throughout the week and you can read Chris’s rambling throughout the season in ‘On the Road’ in the matchday programme at every home game.