Oxford United head for Fleetwood on Saturday looking to record their first away win in the league this season.

TEAM NEWS
Midfielder Samir Carruthers travelled with the squad today for the game and could return on the bench after an injury hit first half of the season. The on-loan Sheffield United midfielder damaged a knee during the very first game of the season, away at Barnsley, but is now approaching full fitness once more and could be on the bench for the U's.

Mark Sykes made his debut as a substitute at Cheltenham in the Checkatrade Trophy on Tuesday- United's reward for that win is an away game at Bury in the quarter final. The Northern Irish midfielder did well and joins fellow new signing Jordan Graham in the squad once more.

THE OPPOSITION
Fleetwood boss Joey Barton is banned from the touchline for the game and looking for his team to bounce back after a 3-2 FA Cup exit at the hands of AFC Wimbledon last weekend.

“I’m disappointed we get undone on the counter but I’m really proud of the lads" Barton said. “Most teams go 2-0 and usually they give up especially when there is a bit of frustration in the stadium. We get the chance to put that right on Saturday and I’m really looking forward to it.

“But I must stress we need the fans with us because our stadium is that size that they can make a huge difference.” 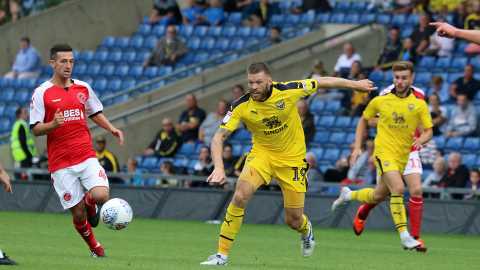 FOLLOW IT LIVE
Hear the whole game live in the UK thanks to our friends at BBC Oxford and see the whole game if you are abroad: the only place online to hear it.