TEAM NEWS
United welcome back midfielder Cameron Brannagan after suspension and hope to have Mark Sykes available again after his arrival from Glenavon. The Northern Irish midfielder missed out on a debut at Brentford on Saturday while the club waited on the paperwork to be completed, but Manager Karl Robinson is  hopeful it will be done in time for him to be involved tonight.

Jordan Graham, who made his second debut for the club at Griffin Park, is available again while striker Harvey Bradbury and midfielder Armani Little are eligible despite returning to Woking on loan at the weekend- both came on as subs in the Cards' FA Cup game against Watford. 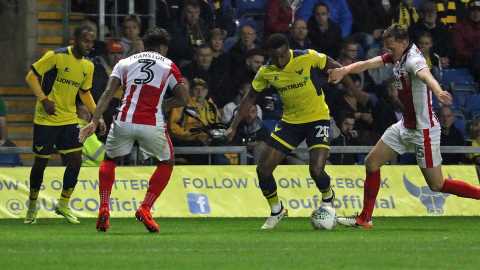 THE OPPOSITION
Former United striker Tyrone Barnett turned his loan into a permanent move to the Robins this week and will lead the line but another ex United man, Johnny Mullins, is ruled out through injury.

New signing Cameron Pring is cup-tied and unable to play, while Will Boyle, Sean Long and Nigel Atangana are all unavailable due to injury.

Under 14s must be accompanied by an adult. No alcohol is permitted on the coaches.
Coach tickets are available now from the ticket office (01865 337533)

FOLLOW IT LIVE
Hear the whole game live thanks to our friends at BBC Oxford in the UK and abroad: the only place online to hear it.