Former Oxford United Manager Jim Smith died today, aged 79. Communications Manager Chris Williams, who stood on the terraces to watch Jim's greatest Oxford team and then worked with him on his return to the club, writes:

It’s too easy to label someone a Legend these days. But approach the Kassam Stadium and look closely at the road signs- Jim Smith’s face still beams down from one or two as you approach the ground. Listen when the fans start singing. ‘In a town, where I was born, lived a man called Jimmy Smith…”
Jim Smith will always be associated with the Golden Years at Oxford United. When he arrived at the Manor he inherited a side that Ian Greaves had somehow turned from relegation haunted to play-off hopefuls. Greaves was a tough act to follow for a man who had recently left Birmingham City and it’s perhaps easy to see his time at the club through yellow rose-tinted glasses. In reality it took him a while to win the fans over and his team didn’t click straight away. He confronted angry fans in the Beech Road after one game and his argument was simply that he was building and improving things. Time was all that he needed.
Sometimes it was hard for fans to fathom: hero Keith Cassells left along with young defender Mark Wright for Southampton. All we got was some bloke called Trevor Hebberd and a winger called George Lawrence. Paul Hinshelwood was a great right back. Why did we need to bring in the crock Dave Langan? What was Smith doing, letting strikers Vinter, Whatmore and top scorer Steve Biggins move on? Surely their replacements Billy Hamilton and John Aldridge weren’t as good?
Through it all there was the ever present pairing of Shotton and Briggs at the back and he was keen for local lads to play a part too: Kevin Brock and Andy Thomas moved up through the leagues as Jim’s teams stormed to title after title. Iconic games came thick and fast. We beat Arsenal, Manchester United, Newcastle, Leeds; basically anyone daft enough to try and take us on at the Manor where Jim would roar his team down the hill towards the London Road. They were unstoppable.
They won the Third Division and we stormed the pitch in celebration. A year later we were back in the centre circle as Chairman Mr Maxwell mangled the players’ names as they took turns to lift the second division trophy aloft. Someone started a chant.  ‘In a town…”
And yet Jim was restless and in the summer of 1985 he left us for QPR. Maurice Evans needed some persuasion to step into the shoes of his great friend but in April 1986 the two friends led the two teams out at Wembley in the Milk Cup Final. Oxford played like Jim Smith’s Oxford. His QPR crumbled. ‘You should have stayed at the Manor’ we sang cruelly at him as he watched physio Ken Fish go up the steps to get his medal.
He knew we were right but Jim’s career took him to Derby, Newcastle and Portsmouth where he almost matched his Oxford exploits (almost, Pompey fans, almost) but he loved living in Woodstock and in 2006 he came home to try and rescue the club from relegation out of the Football League. I remember his first day clearly: “I’m not sure how this is going to work Jim" I said "you’re my hero’" "Rubbish. Aldridge, Langan, Shotton’ he said ”they’re your heroes not me.”
It was never dull working with him. I’d emerge from his office stinking of cigar smoke and laughing my head off at some joke he’d made. We held an ‘Evening with Jim and Ron’ where he laughed so hard at Ron Atkinson’s stories that he could barely speak himself.
Obviously I can’t repeat a single story or joke these days. But I can share one last memory. Jim came back as caretaker for one final spell and his last away game was at Sudbury in the FA Trophy. It rained like I have never seen rain before and Jim stood their immovable all game, leaning on the dugout in his brown leather coat, barking out orders and hardly noticing the downpour. The game was rubbish but Jim loved every second of it, just as he loved every second of a career that started in the dugout in Boston in 1969. We played them during his second spell: “see that supporters bar?” he asked me. “I painted that myself 30 years ago. I can still see the bit I missed…”
He was my hero, but he was everyone in Oxford of my generation’s hero. Stubborn, fierce, but with an enormous heart and a mischievous sense of humour that was never far away. I’ll leave it to Peter Rhoades-Brown, who he signed from Chelsea and who visited Jim regularly while he bravely fought his final illness to have the final word.
“He was the best Manager I ever had. He was such a warm person, so funny and yet so determined and hard working. All of us who played for him loved him and I can’t believe he’s gone. I’ll raise a glass to him tonight, no, sorry, let’s do it as he would want. I’ll raise a bottle.”
RIP Jim. A Legend. 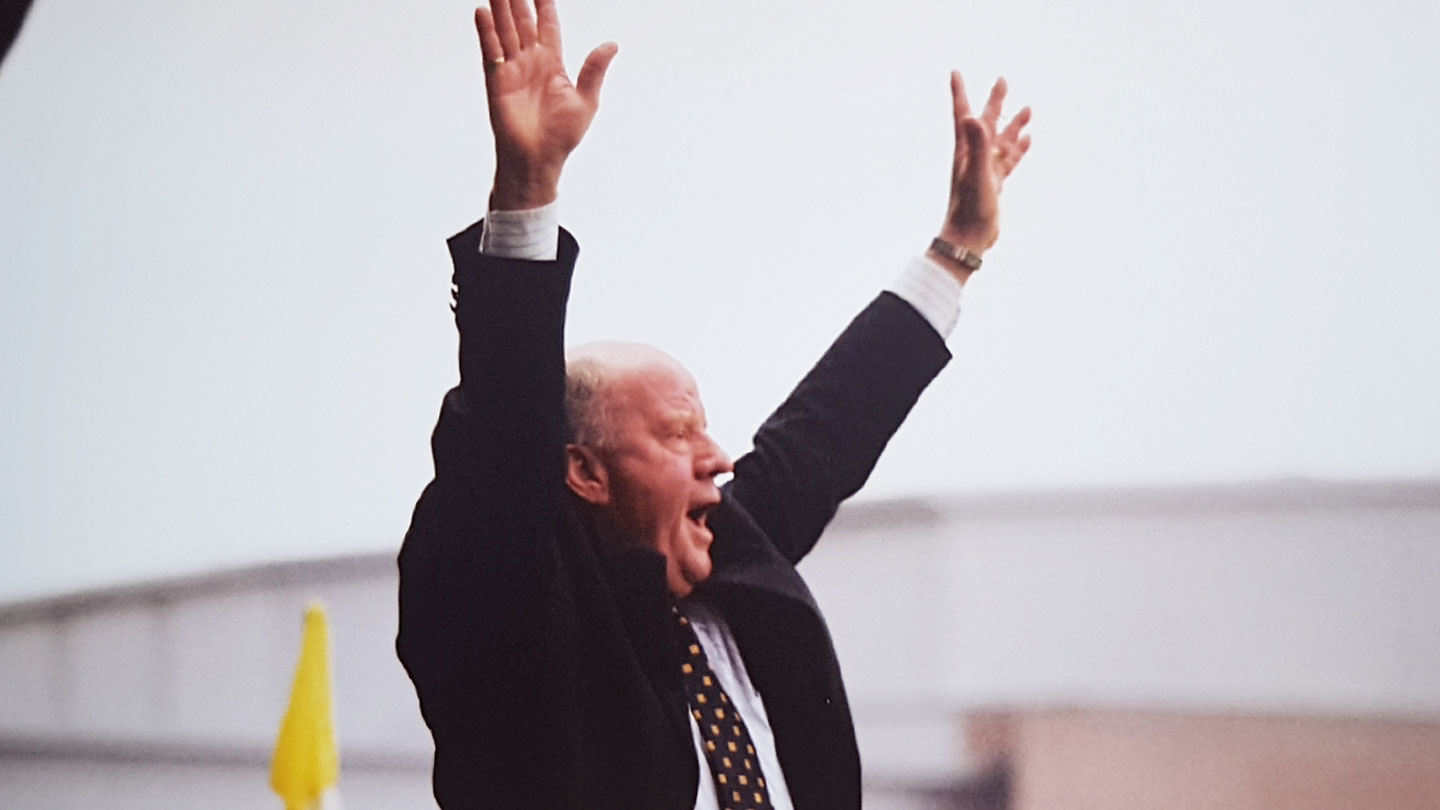