Oxford United head for the Memorial Stadium on Saturday looking to make it back to back wins in Sky Bet League 1.

United will be without Jon Obika after the striker suffered an ACL injury in a midweek friendly. The forward is looking at a lengthy spell on the sidelines and joins Rob Hall in the treatment room after a similar problem.  United are also without the suspended Cameron Brannagan but have Gavin Whyte available again after missing last Saturday's win over Plymouth to be with the Northern Ireland squad.

Samir Carruthers was impressive in the midweek friendly, as was Jamie Hanson who looks to be competing with Shandon Baptiste for a recall in midfield to replace Brannagan.

See Marcus Browne talking about the game in the Preview Show in iFollow where we also have Karl Robinson's thoughts and the full game live.

Rovers boss Darrell Clarke is looking for his side to get the right balance after losing their last two games in the cruellest of fashions.

“It is obviously difficult when you have lost the last couple of games in injury time,” he said. “It is about getting the balance right; yes, you want to pick the boys up because they are obviously low, because they do care, but I had to pick myself up first and foremost, and then work backwards from that. But it is also a case of the players being a lot better.

"I am a frustrated man at the moment, so the players are getting a bit of a balance of both of me at the minute, but the quality has got to be higher going forward as a team, we have got to raise that performance and keep working as hard as we are defensively.

"I think we are having to do too much work defensively in games at times and that is because we are not keeping the ball and using the ball well enough. So it is about trying to get the balance between demanding more while trying to pick them up as well.”

There are plenty of familiar faces in the Rovers squad; Sam Slocombe, James Clarke, Alex Jakubiak and Liam Sercombe have all played for the U’s and if you want to feel old then Cameron Hargreaves, a young midfielder in the squad, is the son of former United captain Chris… 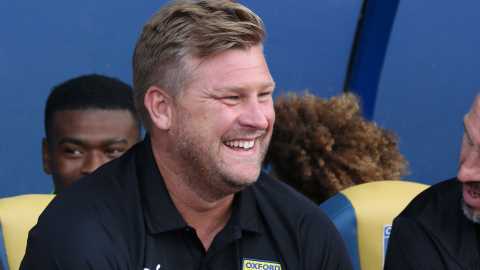 Terrace places are on sale online at oufctickets.co.uk and by phone (01865 337533) or in person from the ticket office.

They are now only available in person and by phone until 3:00 pm on Friday 19th.