Oxford United may have beaten Championship side Leeds United last night but Manager Karl Robinson was hardly full of smiles when he spoke to iFollow after the game.

Coasting at 3-0 up at half time, United let Leeds back into the game before finally winning 4-3, and Robinson let the players know exactly how he felt in the dressing room after the game.

“I wasn’t too impressed at all, I was fuming” he said. “I think a few people heard my rant at the players after the game because I thought some of the performance wasn’t acceptable. OK you are up against a team that cost three million pounds and has Baker and Vieira in it but what are we doing putting our hand on things and playing stupid short passes? That’s kamikaze football, simple as that, and we have to learn our lesson from that.

“I made eight or nine changes so there is going to be an openness to our play but it doesn’t matter who goes on, you still should perform to the best of your ability and be organised. Our midfielders need to stay in the middle of the pitch: they are not wingers they are midfield players. Our full backs need to be better. Our centre halves have to defend and not come out and do silly things. There were a number of things that were wrong but pre-season is for learning and I have learned a lot today.”

There were still plenty of positives as United prepare for their final friendly of the summer away at MK Dons on Friday night.

“We don’t get any points out of today but our pre-season has been top drawer” Karl said. “We have played top Conference, top Championship, a very good Premier League side and we go to probably the best side in league 2 on Friday. So I can’t have asked for any more from this football club in the way we have developed this pre-season programme so far.” 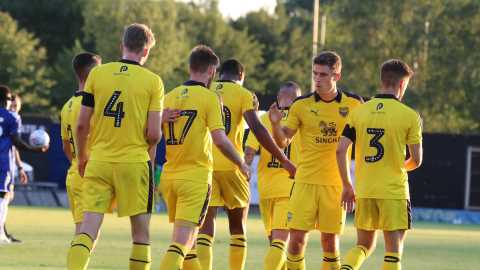