Scott Shearer became the penalty hero last night as Oxford United made it through to the quarter final of the Checkatrade Trophy with a shoot-out victory at Charlton Athletic.

The 36-year-old keeper came in to the side for a rare appearance as cover for Simon Eastwood and saved Charlton's first two penalties to send United through to the next round.

“I feel that it doesn’t matter how you get through in these ties you just have to get through” he told iFollow after the game. “But it was a very solid second half performance and the lads played very well so we are delighted.”

The experienced keeper was quick to praise others for the penalty saves, preferring to thank those who helped him prepare so well.

“We have a great analysis team who did a lot of work, and Wayne Brown sounded me out a lot before the game as well; we worked on everything so the credit belongs to the team behind the scenes really.”

The former Mansfield stopper has had to be a little patient due to Eastwood’s excellence but did confess that he savoured every moment of the game at the Valley:

“I loved every minute” he said. “I knew coming here that I wasn’t going to play many games and would be limited to minutes, and I see now why in Simon’s performances. So I just have to be ready when called upon and enjoy every minute I get out there.”

See the whole interview plus the thoughts of Pep Clotet and extended highlights, all in iFollow.

The draw for the quarter finals takes place live on SKY Sports at around 7.15pm on Thursday. The ties are not regionalised at this stage of the competition and the next round of games are due to be played w/c 22nd January 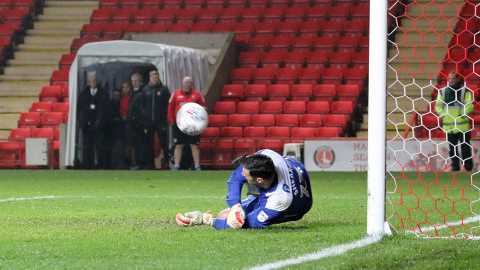