Caretaker boss Derek Fazackerley will urge his players to carry on with the commitment but to cut out the errors when the U’s welcome Plymouth Argyle on Saturday.

United were beaten 3-1 at in-form Rotherham last night and despite playing their part in a very open game there was no hiding the frustration when Derek spoke to iFollow after the game.

“It was a disappointing result” he said. “There were some good performances after a difficult start where we conceded two goals that we should have done better with and I thought we came back into the game well and got it back to 2-1 and had an opportunity to get it back to 2-2 before the break. But then we came out in the second half and once again didn’t defend well enough to stop the third goal which made life very difficult.

“I would say that the players’ hunger and application to try and get back into the game was good but we can’t keep shooting ourselves in the foot like that. It leaves you with a mountain to climb especially playing against a side that has gone 12 games undefeated.

“They are playing with a lot of confidence and that made it very hard for us. We have a mix of youth and experience in the side and it’s about seeing who can handle the situation that we are in at the moment and making sure that everyone is well prepared for the game on Saturday against Plymouth.

“We have to try and put a bad run of home results behind us and give the crowd something to cheer about. Everyone wants that opportunity to try and get the right result out of that game, which would give everybody a lift.”

See the full interview plus a chat with Rob Dickie, who gave an assured debut last night, in iFollow

Get behind the U’s this Saturday as they try to bounce back against Plymouth. Tickets are available from oufctickets.co.uk and 01865 337533 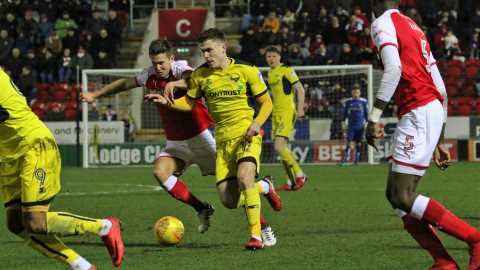