There was a big moment for Shandon Baptiste last night when he fired home a first senior goal for Oxford United.

Shandon starred as United beat Newport 3-0, with his 20-yard effort the highlight of the night for the U’s.

“It was a good goal and a good feeling” he told iFollow.”I’m just glad that we got through.”

“With the goal they told me to get the ball and get forward so that’s what I tried to do and it opened up for me to have a go. When I hit it I knew it was on target and was just hoping it went in. It was good to score in front of the Oxford fans as well and to celebrate with them.”

United were 2-0 up inside four minutes and then saw the job through with a fierce determination to keep a clean sheet.

“I think we defended our box well” Shandon said. “Newport are a good side and playing with three at the back they know how to work that system really well but I thought we matched that and coped with that.”

United now wait for Thursday night’s draw, to be made on SKY between 7pm and 7.30.

“It’s great to get through” Shandon told us. “If we could get a Premier League side next it would be great. I’d love to play against a massive club like that. I hopefully showed the Gaffer what I can do tonight and if I can keep taking my chances then hopefully I can get a game or two in the league as well.”

See the whole interview, highlights, and the thoughts of Karl Robinson in iFollow 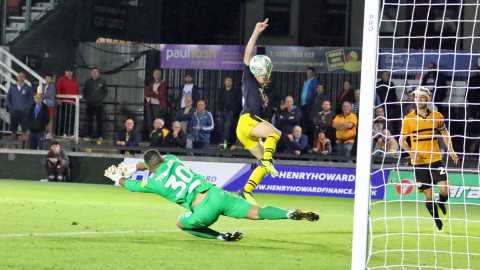