Oxford United were beaten in cruel fashion by leaders Wigan last night but boss Karl Robinson was full of praise not just for his players but also for the 445 fans who made the journey.

“It’s a distant cry from the result that we had at home. Maybe if our strikers had taken the chances we would have won it; they took their one real chance and won the game. I thought our decision making in the final third let us down a little bit at times and we need to do a little bit more, but to be successful you have to come to difficult places like this, keep it tight, keep a clean sheet and try and nick the game at the right time.

“The four and five goal results will come and go but sometimes nicking a point or a 1-0 win away is just as special. I thought we were very close to doing that tonight.”

“He was outstanding” Karl agreed “and that’s what I ask of all my players, that sort of dedication. Curtis Nelson as well came in and did great and everything we are doing is for the benefit of the team and the club in the future. At this stage in the season they are all big games but we will recover, we will work hard and we move on to Doncaster now.”

See the ful interview plus as exclusive with Canice Carroll plus full match highlights, all in iFollow now. 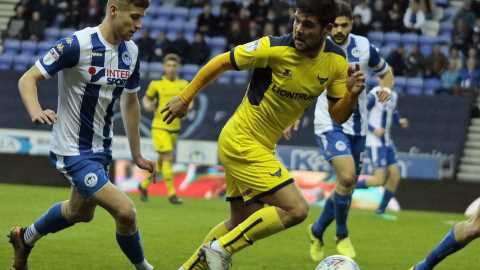