Karl Robinson was almost at a loss for words after last night’s 1-0 defeat to Fleetwood.

A stunning Conor McAleny strike in injury time gave the Cod Army victory after United had given their absolute all.

“You have to score, simple as that” United’s Head Coach told iFollow. “We can do all the coaching in the world and we can get them motivated, but in all the games I’ve done over the years I don’t think I’ve seen anything like that or been as shocked at the end of the game.

“But we have to score, whether it’s Wes or Mowy at the end. People can say we have to stop Conor coming on to his right foot, and we spoke about it as he came on, but he scores a worldy and I can still see that ball going in and can’t believe it. Then it drops to us in the game for five or six chances and we don’t take them, one on one with the keeper or even when we should have had a penalty again.

“But my players were excellent and if you look behind you, nobody has got any closer to us and it’s another game closer to the end so it means other teams have to win at a better ratio.

“We know we have to play Wigan and Blackburn as well as Doncaster away, plus Southend and Rochdale at home so there are some very big games there that we have to win or at least make sure we get something out of them at the very least.

“It’s not about how much talent you’ve got or how much desire. When the moment of the game comes upon you you have to be calm and ready to take it. I’ll take not playing well and getting a scrappy 1-0 win but you are defined in the penalty box and it’s down to you as individuals to get things right when your chance comes there.”

See the whole interview plus highlights in iFollow.

Last night’s result makes Saturday’s home game against Southend even more important. Get behind the team. Click on oufctickets.co.uk or call 01865 337533 to book your place and cheer the U’s on. 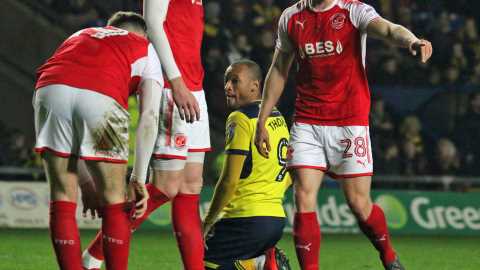