TEAM NEWS
United were light on numbers for Tuesday's win over Accrington Stanley but Mark Sykes is now fully fit after illness and Nathan Holland and Anthony Forde are both back in full training after slight hamstring problems.

With Liam Kelly also approaching full fitness and John Mousinho doing well after a knee problem United are close to a full squad for the run in- Ben Woodburn is expected back at the end of next week and Malachi Napa is improving with each week as well.

Rob Atkinson, recalled from his loan at Eastleigh, made his first appearance on the bench on Tuesday and is part of the squad again.

See Karl, George Thorne and Josh Ruffels looking ahead to the game in iFollow right now.

THE OPPOSITION
Southend come into the game after five straight defeats, the latest being at the hands of Burton Albion last weekend.  It has been close though: in three of those five defeats the game has been decided by a single goal

Southend have a doubt over midfielder Sam Mantom but Manager Sol Campbell is looking for improvements at both ends of the pitch:
“We’ve got to defend right in all different scenarios and we have to put our chances away too,” he said. “We’ve been creating chances and we will cause them problems as long we we’re not scared of going for it at the right moments and don’t hold back.”
“In the last game we took too long to get into gear and go for it, I don’t want that to happen again. When we have the space and the opportunity knocks lets go for it.  Let's go forward and see what happens. We need to have an end product and it took too long to get going against Burton. It might be the same side for us but with players in different positions.”
TICKETS
Tickets are available from oufctickets.co.uk where you can print at home or download to your phone or by calling 01865 337533 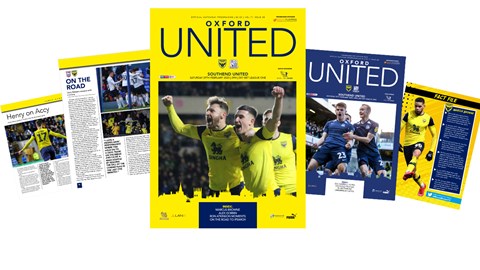 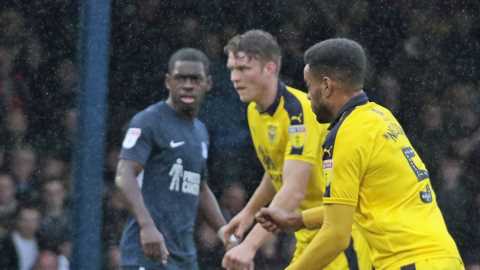 FAMILY
The Family Room is open for this game with player visits and we have a full Family Guide to games available here: OUFCFamily.pdf
SENSORY ROOM
We are proud to have a bespoke Sensory Room for fans under 23 who maybe need to take a little time out on a matchday with our fully trained helpers. Just ask a steward if you would like to use it or email Supporter Liaison Officer Kath Faulkner for more details: kfaulkner@oufc.co.uk
PARKING
There are circa 2,000 free parking spaces at the stadium but we ask everyone to arrive early and park legally. Away fans-  Please park in the West car park - the one closest to the cinema and bowling complex at the fence end of the ground.
AWAY GUIDE
If you are a Southend fan travelling to the game then a full Supporters Guide is available here: OUFCAwayDayInfo.pdf
CLUB SHOP
The Club Shop is open and has scarves and hats to help you keep warm throughout the winter months
COVERAGE
You can follow the whole game on twitter through @OUFCOfficial or on our Instagram page or here in our Match Centre, and see or hear the game in iFollow wherever you live.

Matty Taylor's seventh goal in six games made it four wins in four games as Oxford United's upward trajectory continued against a battling Southend this afternoon. Leading through a James Henry penalty, United were made to fight hard when Lewis Gard turned home a loose ball to level before the break but Taylor turned to fire home with five minutes left and finally end the visitors' stubborn resistance.

Southend will be heartbroken because, having conceded the first, they battled back and thought they had earned a draw at least.
It took 17 minutes for number 17 to make the breakthrough with a goal that perhaps highlights the visitors’ problems this season. A deep cross was palmed away by keeper Patrik Gunnarsson under pressure from Taylor who got his body between the keeper and the ball as three defenders dropped back to cover on the line. Gunnarsson inexpicably grasped out and dragged Taylor down; perhaps one of the defenders might have challenged instead of covering? But regardless, it was a clear penalty and Henry took care of the rest to make it 1-0.
United should have gone on from there but instead Simon Eastwood made a good save from a Stephen McLaughlin free kick after 20 minutes as Southend fought and battled back, Mark Sykes getting back to make an important interception after 28 minutes, but the danger for Sol Campbell’s side was that chasing the game left huge gaps for United to exploit at the other end.
Marcus Browne looked the most likely to take advantage, tormenting right-back Elvis Bwomono and the covering Terrell Egbri down United’s left, but Southend refused to accept defeat and were deservedly level at the break when Eastwood reacted brilliantly to prevent Rob Dickie from scoring an own goal but Gard was all on his own to nudge the ball home from two yards out to level at the break.
It might have got worse, with Eastwood twice making good saves to keep his side level, one save flying to his right to save from Gard and another to spike a Milligan header over the bar. You could sense the frustration from the home fans, most of whom know that United's record against Southend is not the best, but their team responded to their pleas and gradually started to push the visitors back.
Sub Dan Agyei's pace clearly unsettled the Southend back line, which dropped deeper to cope, and that invited more and more pressure. Browne didn't quite catch a volley from a corner but pressure was building and with five minutes left Browne, refusing to give up, kept running, crossed a deflected ball that reached Taylor and he turned and fired home to spark much joy among the United faithful.
A little tough on Southend, but United are on a roll at the moment and have the happy knack of not giving up. Check the number of late goals this season, where they refuse to settle for one point when three are on offer.
Upwards and onwards.
See you at Shrewsbury.
Att:7451
Away:485
Report by Chris 'Rewrite' Williams, pictures Steve Daniels and Tom Melvin, stats by OPTA