Oxford United welcome Blackpool to the Kassam Stadium on Saturday as they return to Sky Bet League 1 action.

TEAM NEWS
United welcome back top scorer James Henry after injury and will wait on the fitness of Cameron Brannagan and Matty Taylor who are both close to a retiurn as well.

George Thorne is fit and available, as is new signing Liam Kelly with Ben Woodburn two or three weeks away from a return.

Rob Dickie makes his 100th start for the U's with Karl Robinson having to decide whether John Mousinho or Elliott Moore partner him at the back.

See Karl Robinson and Rob Dickie looking ahead to the game in iFollow right now.

THE OPPOSITION
Blackpool have slipped to 15th in the table after five defeats in their last six games but boss Simon Grayson was pleased to see his side put Wycombe under pressure at Adams Park on Tuesday night.

“In the second half at least the players had a go” he said. “We looked a different team, got on the front foot more and enjoyed more opportunities. They were hanging on in the last 20 minutes. We were second to every ball for the first 10 to 15 minutes, then things dropped to them and they finished them off well.
“We’ve got to make sure we’re bright and alert, especially when we’re taking on a team like Wycombe, who you know are going to be on the front foot, play with a high intensity and win second balls. You can’t gift teams the opportunity to score two goals because you’re giving yourself a massive challenge to get anything out of the game.
“It’s certainly something we’ve got to look at and we’ve got to work even harder to put it right.”
TICKETS
Tickets are available from oufctickets.co.uk or by calling 01865 337533 and can be purchased from the Ticket Office on the day.

Season Ticket holders have the chance to bring a friend for just £5 but are reminded that this offer is not available on matchday
The aim is to give fans who haven’t been this season, or maybe even for a little longer than that, a chance to come along at a hugely reduced price and get back in to the habit of watching the U’s. Do you know someone who fits that category? Then give them a call and get them along as part of the Yellow Army.
The offer is open to all Season Ticket Holders and it’s easy: just log on to oufctickets.co.uk or call 01865 337533. Season Ticket seat exchanges are limited to your usual stand and are available on a first come first serve basis. 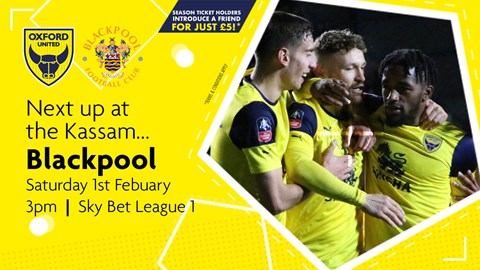 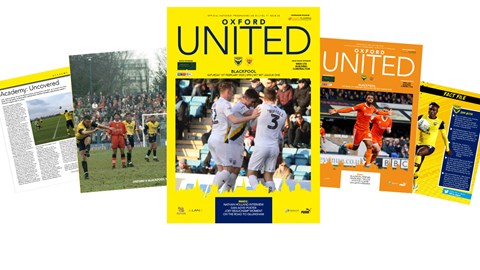 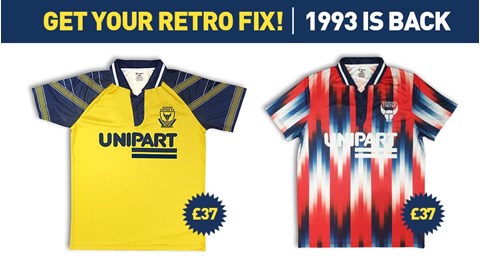 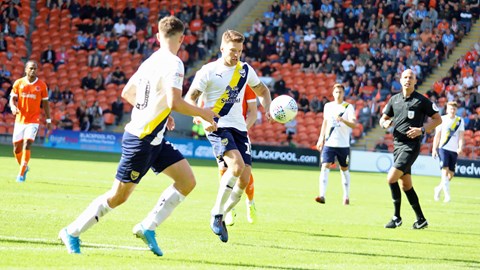 FAMILY
The Family Room is open for this game with player visits and we have a full Family Guide to games available here: OUFCFamily.pdf
SENSORY ROOM
We are proud to have a bespoke Sensory Room for fans under 23 who maybe need to take a little time out on a matchday with our fully trained helpers. Just ask a steward if you would like to use it or email Supporter Liaison Officer Kath Faulkner for more details: kfaulkner@oufc.co.uk
PARKING
There are circa 2,000 free parking spaces at the stadium but with another big crowd expected we ask everyone to arrive early and park legally
Away fans-  Please park in the West car park - the one closest to the cinema and bowling complex at the fence end of the ground.
The pedestrian crossing  point by Vue cinema will be managed for the first time to enable a safe and manageable crossing for supporters as well as the flow of cars.
Barriers will in place and Stop/Go signs will used to enable a controlled crossing managed by stewards. This is a trial. Please can all pedestrians and drivers adhere to instructions given by stewards and be patient to ensure the safety of everyone.
We kindly ask for your assistance in co operating with staff in enabling us to facilitate this trial would be appreciated.
AWAY GUIDE
If you are a Blackpool fan travelling to the game then a full Supporters Guide is available here: OUFCAwayDayInfo.pdf
CLUB SHOP
The Club Shop is open and is taking orders for our fantastic new retro range. Pop in before the game.
COVERAGE
You can follow the whole game on twitter through @OUFCOfficial or on our Instagram page or here in our Match Centre, and hear the game in iFollow if you are in the UK or see it if you are abroad.

Oxford United came from behind to beat Blackpool 2-1 at the Kassam Stadium this afternoon. Trailing to an early goal from Gary Madine, United bounced back and goals from Mark Sykes and Marcus Browne got them back to winning ways as they returned to league action.

Karl Robinson's side got off to the worst start possible when Madine tricked his way through for an opener after just nine minutes. Always a threat, Madine shaped to shoot and then shifted inside, repeated the trick to create a yard of space, and then side-footed it casually inside the left-hand post, giving Simon Eastwood no chance at all and scoring his first goal since his return to the club during the transfer window.
United didn’t panic and got exactly what they needed: a quick response. The return of Cameron Brannagan and James Henry to midfield after injury added a very solid feel to the middle three, while the pace of Browne, Sykes and Nathan Holland was always going to cause problems and on 18 minutes they were level, although who scored it may take an inquest!
Sam Long crossed, the ball was pushed back by Josh Ruffels for Browne who smashed it low and hard at goal. Sykes got a vital touch, although how much he knew about it is open to question because it seemed to hit his backside, but the ball was past keeper Chris Maxwell and the U’s were level. Sykes’ goal or Browne’s? Let them argue about it but you’d imagine Browne was more inclined to give the goal to his team mate a few minutes later…
The equaliser lifted things and United then started to dominate the game, just as they had done at Bloomfield Road earlier in the season without getting much reward.
Blackpool dropped deeper and looked to hit them on the counter, but with Sykes in impish form and Browne and Holland always looking to take defenders on, it was only a surprise that more chances didn’t come along. The superb Rob Dickie, on his 100th start for the club, prodded a cross over and then on 40 minutes Browne DEFINITELY scored the second with a terrific effort.
Henry’s free kick eluded the back line and Browne seized on it at the back post. He made the rest look easy but actually to lift the ball so sharply into the roof of the net with defenders covering took great skill: a quality goal from a quality player.
The second half saw United play some neat football and a Brannagan blast flew into the gloves of Maxwell before Browne burst away and saw Maxwell deny him a second goal/hat trick with a smart save down to his left.
Blackpool, without a win in ten games, saw a Ben Heneghan header cleared off the line by the hugely influential Henry and a shot fly off Madine's thigh and drift wide but were otherwise mainly employed trying to stop United ending the contest with a third. Sykes and Browne went close but there was still time for a huge let off after four minutes of injury time, when a terrible back pass from Ruffels picked out Madine who beat Eastwood but saw his shot clip the outside of the post.
Such fine margins sometimes define a season.
In the end, a moment of class from Browne was enough to give the U's all three points, with the added bonus of cameos for Liam Kelly and George Thorne.
An important win, sandwiched in between two FA Cup games against Newcastle United.
Tuesday night. BBC 1. See you there.
Att: 7,525
Away: 476
Report by Chris Williams, pictures Steve Daniels and Tom Melvin, stats by OPTA

Crowds are on the up at Oxford United and with the team playing some of the most exciting football for years we want everyone to have a chance to see what all the fuss is about.

That’s why for our next home game against Blackpool we are offering Season Ticket holders the chance to bring a friend for just £5.

The aim is to give fans who haven’t been this season, or maybe even for a little longer than that, a chance to come along at a hugely reduced price and get back in to the habit of watching the U’s. Do you know someone who fits that category? Then give them a call, get a fiver off them and book a ticket as we take on Blackpool.

The offer is open to all Season Ticket Holders and it’s easy: just log on to oufctickets.co.uk with your fan number and book your guest a ticket. You can change seats within your usual stand if you know that the seats around you also belong to season ticket holders.

What are you waiting for? Tickets are available right now so Bring a Friend and help us grow the Yellow Army against the Tangerines.

Be quick though: the offer is not available on matchday so you need to order tickets before 4.30pm on the Friday before the game.

Terms and conditions:
Offer available to Season Ticket holders only, 1 per season ticket from oufctickets.co.uk or 01865 337533 before 4.30pm on Friday 31st January. Season Ticket Seat exchanges for this fixture are limited to your usual stand and are available on a first come first serve basis. Offer not available on day of the match.