Oxford United look to get back to winning ways at Burton tonight.

TEAM NEWS
United are without Marcus Browne who took a heavy blow to the ankle during Saturday's defeat at Peterborough. The on-loan Middlesbrough forward didn't travel with the squad this morning and is facing a battle to be fit for Sunderland at home on Saturday.

However Anthony Forde is fully fit and comes into the squad while Liam Kelly, George Thorne and Dan Agyei will be hoping for opportunities while John Mousinho will be looking forward to returning to the Pirelli Stadium where he skippered the Brewers before joining the U's.

See Karl Robinson previewing the game in iFollow right now where we have Anthony Forde and Dan Harris as our guests in the Preview Show...

Burton boss  Nigel Clough saw Stephen Quinn come off against Gillingham with a groin strain, whilst Jake Buxton missed out because of a rib injury and Oliver Sarkic will miss out due to suspension after his red card at the weekend.
Clough said "We would love the three points but Oxford have had as good a run as anybody recently and came so close to knocking Newcastle out of the FA Cup. Sometimes you give your team one after exploits in the cup and extra time as it’s hard to raise it again so soon after but I’m sure they will be back on it against us.” 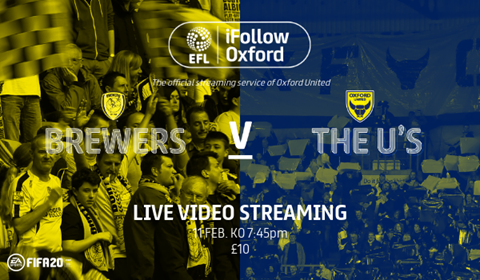 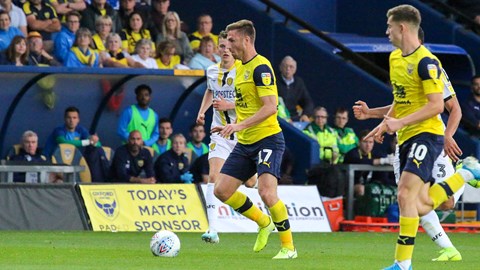 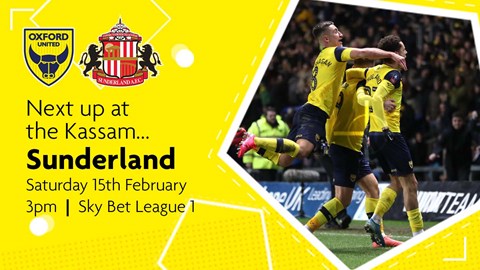 TICKETS
This game is not all ticket.

Prices on the night are:

FOLLOW IT LIVE
If you can't get to the game then you can still SEE IT LIVE in iFollow wherever you are. We have coverage on Twitter, Instagram and the Match Live on this site with a report and Gallery right here on the final whistle.

THE PLAYLIST
Want to get in the mood for the game? Then search for Oxford United Official on Spotify where we bring you a new playlist for every away journey, plus the dressing room playlist. The Playlist is available for the drive north and is always flexible: let us know on Twitter if you have any more to add to help get the Yellow Army in the mood as we head for Burton.

Oxford United refused to be  beaten at Burton this evening when a Matty Taylor touch earned them a point at Burton. Trailing to an early goal from Lucas Akins, United hit back through sub Dan Agyei but then looked to have been undone when Jamie Murphy made it 2-1. However, with 90 minutes on the clock, Rob Dickie let fly, Taylor got a touch and United had snaffled a point that they fully deserved.

United aren't having much luck at the moment are they? Maybe this will be the turning point. Already disrupted by a family bereavement that led to Jamie Mackie having to leave for home an hour before the team set off for the game, United then had to make further adjustments when Liam Kelly’s full debut was ended after just 20 minutes through injury.
Perhaps typical of their luck, while they were still trying to get everyone into shape they conceded. No hint of skullduggery but as soon as the game restarted the Brewers were onto them and Ryan Edwards rolled the ball across for Akins to wrongfoot Simon Eastwood and make it 1-0 via a deflection.
Not the cleanest of strikes and it may even end up being given as an OG for Rob Dickie, but Akins is always a nuisance and United were grateful that Eastwood was able to fly to his left and push a Reece Hutchinson drive away from goal, and a pack of onrushing forwards, a minute later before they finally started to make some headway and begin to look dangerous.
That was down to them getting the ball down and spreading it wide for Nathan Holland and Mark Sykes and then keeping the ball better in the centre of the pitch. Holland almost put them on level terms just before the break, forcing keeper Kieran O’Hara to kick a low drive away at his near post, and there were encouraging signs as the U's battled their way back.
James Henry, having mopped up the first danger of the second half, then popped up just outside the other penalty area to crack a good effort wide after 48 minutes as United, backed by their frozen fans, started to turn up the heat and buzz around the Brewers' box. Matty Taylor couldn't quite do enough with a back-post header from a delightful Henry dink after 58 minutes but a goal was coming and on 63 minutes it was Agyei who drew his side level.
The move began with Holland on the left who moved the ball on for Taylor, just inside the Burton half. His pass was timed perfectly and Agyei ran clear in the right channel and smashed the ball goalwards. O'Hara almost did enough but the ball looped up and continued towards the empty net before dropping delicately home for Agyei's second of the season. Agyei-take, educate, now organise...
Back in the game, United went for a win, Brannagan firing over and players flooding the box, but after 71 minutes they were behind again as Murphy gave the home side the lead and cruelly ended the revival. There seemed little danger when Murphy moved infield from the left but his shot crept inside the left-hand post and all of the hard work to regain parity had seemingly been undone in an instant.
Nonsense. United refused to buckle, with Agyei leading the charge and setting up a chance for Ruffels on 74 that forced O'Hara into a very good save when the left-back let fly from 25 yards. It finally paid off in the very last minute as Taylor poached an equaliser and ensured that the U's had got their due reward.
Att: 2,278
Away: 415
Report by Chris Williams, pictures by Steve Daniels, stats by OPTA

This game is not all ticket  but please note all prices increase by £2.00 on Matchday
Tickets are no longer available online but are available in person and over the phone (01865 337533)
Tickets are available for collection only until 5pm Monday 10th February from the Ticket Office.
Prices as follows.
Seated
Terraces
*Young Persons must be in possession of ID to qualify for concession prices
London Road Club
Departure Times:
Kassam Stadium 15:45
Kidlington 16:00
Prices:
Adult Member - £18.00
Adult Non Member - £20.00
U18 Member - £16.00
U18 Non Member - £18.00
Call 01865 337533 to book
Under 14s must be accompanied by an adult and no alcohol is permitted on the coaches