Oxford United welcome Millwall in the second round of the Carabao Cup tonight (7.45pm)

Team News
Matty Taylor limped off in the first half at Bristol Rovers with a groin strain and will have a scan later today to assess the damage, ruling him out tonight's game and opening the door for Jamie Mackie to start, especially with Malachi Napa out of action with a broken leg sustained in the last round of the competition.

New signing George Thorne could be involved for the first time as could striker Daniel Agyei who has looked sharp in training. Kevin Berkoe, who made his debut in the win over Peterborough in round one, is included in the squad once more while Shandon Baptiste is hoping to play some part on his return from injury.

“I’m hopeful that once the fourth official puts his report in then the outcome will be that I was trying to get the ball back" he said. "I shouldn’t have gone into their [Middlesbrough’s] technical area but that was the end of it. We had a beer afterwards and there didn’t seem to be too much of a problem. I’m certainly expecting to be on the touchline on Tuesday and Saturday."

Millwall will be without winger Jed Wallace as he serves the second of a three-match suspension. Jiri Skalak (ankle) will also miss out through injury, as will Mahlon Romeo.

TICKETS
There is still time to book your place online at oufctickets.co.uk and print your tickets at home to save time on the night; our ticket staff are available to talk you through the best seats available on 01865 337533.
Please note that this season you can download your ticket to your mobile for use on the day - no need to even print it.
Prices have been reduced for this game to: 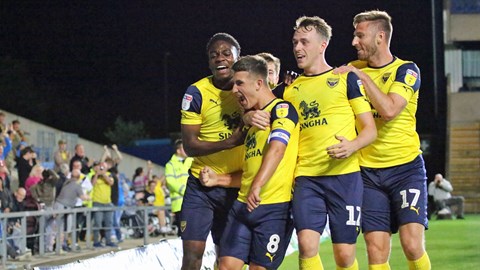 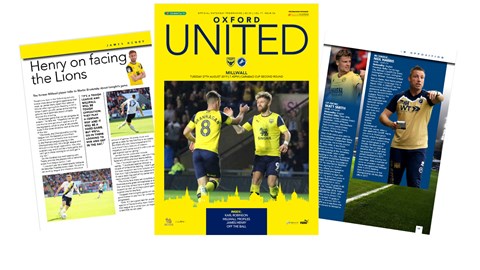 GETTING TO THE GAME
A full guide to public transport is available HERE
The new OX2 football service is NOT available tonight as it is being trialled for Saturday games only at the moment; it returns against Coventry City on Saturday as will the OX3 and OX7 buses, which only run for league games.

Parking
The car parks at the ground will be open as usual and we will tweet (@OUFCOfficial) with traffic and parking updates.
There will be no vehicle movement in the south car parks (VIP and A) from the 90th minute for 15 minutes.
Away fans-  Please park in the West car park- the one closest to the cinema and bowling complex at the fence end of the ground.
NORTH STAND MOVEMENT
The Rapid Expansion System (RES Gate) WILL be in operation behind the North Stand  which means fans cannot move from one end of the ground to the other behind that stand.
Any supporter with mobility impairment who requires assistance during the fixture is advised to locate an OUFC Supervisor (indicated by either a yellow / orange or orange coat)
AWAY GUIDE
If you are a Millwall fan travelling to the game then a full Supporters Guide is available here: OUFCAwayDayInfo.pdf
Look out for a special match programme that we produce just for away fans featuring a full guide to the ground. Please note that no alcohol will be sold in the away concourses after kick off.
CLUB SHOP
The Club Shop is open and the new home and away kits are available.

Oxford United never know when they are beaten in the League Cup. Trailing 2-0 to two goals from Jon Bodvarsson, United hit back through a late strike from Mark Sykes and a penalty from former Millwall forward James Henry to force a penalty shoot-out at the Kassam Stadium tonight. John Mousinho smashed home the winning penalty and the 1986 winners were once again through after a giant killing.

As has become traditional in this competition, United rang the changes, handing Kevin Berkoe a full debut at left back and easing Shandon Baptiste back into action after a long-term knee injury. With Sam Long, John Mousinho, Mark Sykes, Anthony Forde, Rob Hall and Jamie Mackie all coming back into the side, only Simon Eastwood, Jamie Hanson and Elliott Moore remained from the team beaten at Bristol Rovers at the weekend and understandably it took time for United to settle down.

Millwall enjoyed the lion’s share of the ball as a result but didn’t do too much with it until captain Shaun Hutchinson headed a cross down and forced Eastwood into a good save after 20 minutes of a cagey first half.

Hall, looking sharper as each week goes past, almost scored his first goal since his comeback with a free kick on 22 that forced keeper Luke Steele to tip it over the bar and the same player's sublime touch a minute later almost set the hard-running Baptiste free as a sliding defender smuggled the ball away inside the box.

However, the Championship side had looked more likely to find the opener and on 29 minutes it came from a classic source: Keeper Steele to the head of centre forward Tom Elliott who flicked in to the path of Bodvarsson for a barreling run through the United defence and a simple finish to the right of the stranded Eastwood to make it 1-0.

Baptiste almost equalised with a low drive which Steele pushed away on 32 minutes, Hall got too much on another free kick on 42 but United had hung in there and will have been gutted to concede a second goal before the hour mark. It was another very familiar looking goal: a break down the right, a good cross and Bodvarsson got across Moore to flick a clever header over the helpless Eastwood once more to double the Millwall advantage.

The U’s had already seen a Hall drive go a yard wide of the mark and Sykes smashed a 25-yard effort over the bar on the hour as they tried to force their way back into the tie, but it just wasn't to be their night. George Thorne was given just under half an hour to try and open up a well-drilled and very strong Millwall back line on his debut, before Henry was given a late chance to soak up the boos of the fans from his former club; he will get a few more next time the sides meet.

It was midfielder Sykes who set up a traditional cup tie grandstand finish when he blasted a shot through the keeper, via a deflection, with five minutes left and the U's had deserved that goal as the Lions tried to withstand a late onslaught, with the excellent Thorne acting almost as a quarterback in trying to spread the ball forward from deep.

One last ball forward, one twist from Woodburn and United had a penalty. Henry kept his nerve and the game was in the lap of the gods.

And so to penalties. McCarthy made it 1-0 with Millwall's first, Thorne made it 1-1. Bodvarsson sent his over the bar, Woodburn gave United a 2-1 lead. Ferguson saw his spot kick saved by Eastwood and Henry scored his second of the night for a 3-1 lead. Williams made it 3-2 before Mousinho thumped home and United were through.

Extraordinary. See you in the next round....

Oxford United welcome Millwall in the  Carabao Cup second round on Tuesday evening.

Prices have again been reduced for this game to:

Tickets are on sale online from oufctickets.co.uk  and throughout Tuesday from 01865 337533 - please note that the Ticket Office is closed on Bank Holiday Monday.