Team News
Matty Taylor joined the U's on loan from Bristol City yesterday and stands by to play a part after his registration was completed in time for him to be involved but fellow new signing George Thorne will have to be patient after his paperwork was completed later in the day.

Tariqe Fosu could be in line for a return to the starting eleven after missing the game at Blackpool with a slight hamstring problem while Shandon Baptiste will play in a behind closed doors Under 23s friendly against AFC Bournemouth today as he continues his return from injury.

The Opposition
Nigel Clough's Brewers suffered a second straight 1-0 home defeat at the Pirelli Stadium on Saturday losing to Rotherham United after a similar defeat against Ipswich the game before.

"We need to take it out on Oxford and Shrewsbury" Clough said on Saturday "We've got nothing, so we pick up the pieces and start again. Our four performances so far, with new players coming in and settling in, we've been encouraged by the performances.

"You get another setback, you start again. You regroup and it's Oxford on Tuesday night." 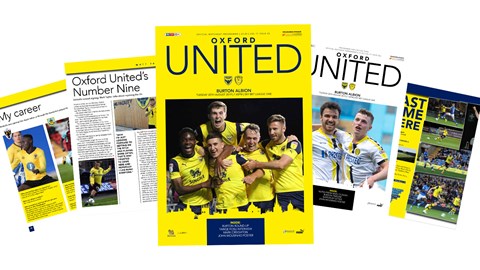 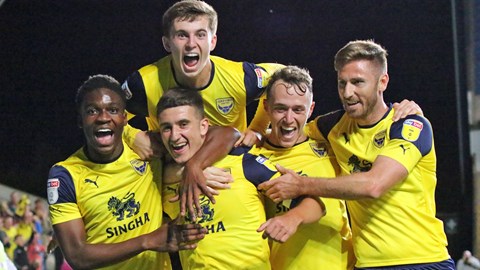 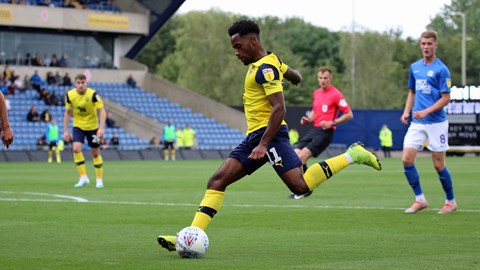 Match Day
The RES gate behind the North Stand will not be in operation for this game meaning fans can move from one end of the ground to the other behind that stand after the game. See the Match Pack block above for the best ways to make the most out of your day, including travel details and an away fans guide.

Phone Issues
Unfortunately due to circumstances beyond our control the telephone lines to the Kassam Stadium currently have a technical fault and we are advised that this could take up to 24 hours before they are repaired.

Online tickets are still available from oufctickets.co.uk  and cards can be taken at the ticket office tonight - manually or contactless - but we cannot currently sell tickets over the phone.

The Club Shop remains unaffected but the club offices, including the admin team and Commercial are unable to take calls to their usual club numbers.

We advise fans to arrive early to avoid any potential problems and we apologise for any inconvenience.

Football Specials
The OX2 service was a big success on its first trial run against Peterborough but is only currently in operation for Saturday games and therefore not available tonight. The OX3 and OX7 buses will run as usual. Cick HERE for details

Coverage
iFollow is available with the full game LIVE to see in the UK and  overseas.There will be reaction from the key men after the game, and you can follow all the action on Twitter at @OUFCOfficial and on this site via the Match Centre (try it - it is new and proving very popular) with a match report right on the final whistle.

Oxford United did all the hard work but still ended up losing to Burton Albion at the Kassam Stadium tonight. Trailing to a Jake Buxton header at the break, United bounced back to lead 2-1 thanks to goals from Cameron Brannagan and Anthony Forde, but a 23-minute hat-trick from Scott Fraser turned the game on its head for a second time to give Nigel Clough's side a 4-2 win.

There was a let off after 17 minutes when Liam Boyce dragged a very presentable chance wide of the mark from 12 yards, but United would have scored the Goal of the Century a minute later had Ben Woodburn been able to make proper contact with a 35-yard pass from Henry that just invited a volley from the edge of the box.

Burton started to drop deeper as the home side found their rhythm and with Woodburn finding good positions just behind the returning Matty Taylor, there was plenty of invention from the U’s. But The Brewers were the only side creating chances and on 29 minutes it took a very good save from Simon Eastwood to parry a goalbound header from John Brayford round the post.

The relief was short lived though. From the resulting corner Buxton found space at the near post to back head the ball with a neat glance that left Eastwood helpless and gave the away side a 1-0 lead.

United almost responded immediately when Woodburn slipped Taylor in on goal, but his clip over the keeper was beaten away for a corner and when that was delivered and flicked on Taylor could only lift it up and over the bar from close range.

The Yellows were pressing though. John Mousinho couldn’t repeat his goal against his former club when steering a 42nd-minute corner wide, Taylor was denied by the faintest flick off a defender’s head at the near post as the first half built to an exciting finish, and the excellent Cadden’s cross was clawed away from under the bar by the backpedalling O’Hara.

They had built up a head of steam and it took just two minutes of the second half for them to get back on level terms. It was a peach of a goal and started with Taylor springing the offside trap and holding the ball to allow Forde to join him. Their slick movement baffled the Brewers and Forde’s slipped ball across the box was perfect for Brannagan to smash home across the keeper for his third of the season: 100 percent of his team’s goals at home at that stage. Cameron Brannagain.

It didn’t take long for that record to change as United stormed into the lead through Forde’s first goal for the club. It owed a lot to Rob Dickie’s willingness to bring the ball out of defence and his precise ball sent the former Rotherham winger clear on goal; credit to him because he could see along the line and timed his move well. O’Hara came to meet him but Forde’s low shot was deadly accurate, curling across the keeper to make it 2-1.

Surely United would go on to win the game? Burton had other ideas.

On the hour, the ball bobbled around on the left flank but broke the way of the visitors who squeezed the ball into the box. United half cleared but Fraser, 16 yards out, let fly with an absolutely unstoppable rising effort that was past Eastwood before he could move and we were all square once again at 2-2.

Incredibly, all of United's hard work to get back into the game was suddenly made to look as though it would count for nothing on 69 minutes when Fraser repeated his previous strike. Letting fly from similar distance the ball flicked off the outstretch leg of the unwitting Dickie and curled perfectly past Eastwood to make it 2-3 and put the fizz back into the Brewers.

On came Mackie and Fosu to try and force the pace for the final 20 minutes, then Rob Hall for the last ten, but it was Liam Boyce who went closest to another goal when his 78th-minute header came back off the post for the visitors before Fraser ensured that United were doomed.

Similar range, same left foot and same outcome as his best goal of the night condemned the U's to their first home defeat of the season and just their second loss at home in 2019.

Credit to the visitors: well drilled and picking up their second away win in two league trips. United had played well in patches but not shown the consistency of their previous games. Work in progress.

On to Bristol Rovers on Saturday.