The U's look to bounce back after defeat at Wimbledon and have Jamie Hanson available despite him limping off during the second half at the Cherry Red Records Stadium.

Samir Carruthers could make a welcome return to the squad after training fully this week after his knee injury while Simon Eastwood is due to train on Thursday and Marcus Browne is scheduled to return 24 hours later, leaving just Rob Hall in the treatment room as United's injury problems ease.

Luton come into the game off the back of a 2-2 draw with Charlton at Kenilworth Road on Saturday where boss Nathan Jones felt hard done by:

"They've been as clinical as us, but we had far more opportunities and that's the thing that is hurting us at the minute. We're showing we're a really good side. We can compete, we can play. We've just got to not give silly goals away and just be a bit more professional late on."

It looks like former United striker Danny Hylton will be missing up front for the Hatters tonight.

"We've just got to be careful, it's so tricky" Jones said last week of Hylton."It could be days, it could be Saturday if everything goes well with no problems. It could be Tuesday, it could be next week, we don't 100 per cent know. We know everything about the injury, it's just about being comfortable enough so that he doesn't breakdown again." 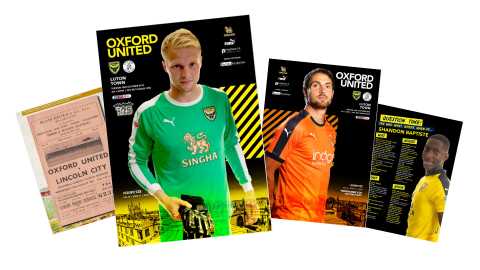 The game is no longer All Ticket- you can buy online at oufctickets.co.uk up until 5pm or call 01865 337533 as well as buying at the ticket office up until kick off time.

Please note that the barier will be in place behind the North Stand so there will be no transfer between the ends of the ground behind that stand.

If you are a Luton fan travelling to the game then a full Supporters Guide is available here: OUFCAwayDayInfo.pdf Don't forget that there is a special away version of the matchday programme tonight with additional information for visiting supporters.

The Club Shop has taken stock of all sizes of the brilliant new home shirt. Why not call in before the game to grab a yellow shirt? Or you can order online at oufcshop.co.uk

We are delighted to welcome back Lee Bradbury as our Guest of Honour tonight. Lee played up front and in midfield for  the U's and of course now has son Harvey on the books in our under 23s. Lee will be meeting guests behind the scenes as well as being introduced to the crowd at half time.

There will be another big prize in tonight's half time draw where half the money raised goes to one lucky winner. Tickets cost just £1 and our sellers are all around the ground.

The Family Room is not open this evening - it is open for all Saturday home games but not usually for midweek fixtures.

iFollow is available with thje full game LIVE to see wherever you are. There will also be reaction from the key men after the game, and you can follow all the action on Twitter at @OUFCOfficial.

Oxford United were beaten in the cruelest of fashions tonight as Luton Town hit back at Grenoble Road. A Ricky Holmes strike had put the U's in front in a wholehearted game but James Collins levelled from close range before ten-man United were beaten by a Dan Potts header deep into injury time.

As you would expect from two teams who have developed a healthy disrespect over the last few years, the game started at a furious pace and United had the better of the first quarter of the game. Luke Garbutt and Collins exchanged early chances. Tony McMahon, restored at right back, was joining the attack well and putting in some cleverly crafted crosses for the joint strike force of Jon Obika and Gavin Whyte to attack, with Whyte stretching the game with his pace at every opportunity.

At the other end Jon Mitchell made a good save from a Pelly-Ruddock Mpanzu effort after 13 minutes and Luton had certainly come to try and press United back, with Harry Cornick’s pace keeping Rob Dickie on his toes on his return - the striker poking a poor effort wide on 21 when he seemed to have Mitchell at his mercy.

Whyte tested keeper James Shea with a left-footed drive on 23, Glen Rea forced another save from Mitchell two minutes later and both sides had played attractive attacking football with the visitors perhaps shading the scoring opportunities in a bright first 45 minutes.

What the game needed was a goal to lift it and three minutes into the second half it was Holmes who provided it. If it’s possible to get an assist without touching the ball, then Garbutt gets one because he was steaming down the left as Holmes drifted across the face on the Luton area. The Hatters had one eye on the left back but forgot to close down Holmes until it was too late and he took full advantage by twisting to hammer the ball low and true across Shea and into the bottom right corner for a very clever goal.

Luton have conceded the first goal eight times in 11 games this season but, annoyingly, bounced back quickly to equalise this time. United didn't clear their lines down the Luton left, Mpanzu crossed and Cornick, with the goal at his mercy, inexplicably smacked it against the bar. Maybe United's luck had changed? No such thing. Straight to Collins and 1-1.

It was even stevens but then with 17 minutes left the tables turned in Luton's favour. Baptiste, captain for the second time, had been booked in the first half and caught Andrew Shinnie as he challenged for a ball on half way. He fouled the visiting player for sure, and had been warned already not to risk a second yellow, and ref Michael Salisbury was swiftly on the spot to show a second yellow card, with the red raised high and Baptiste heading for the dressing room. All part of the learning curve for the 20-year-old but United now had to play with ten men and Luton were able to throw more men forward.

Luton sensed that the game was there for the taking but found United determined to take at least one point out of the game now. Nelson and Dickie threw themselves in front of everything, McMahon and Garbuttt stopped the ball coming into the box and those in front of them worked ferociously to keep the ball away from Mitchell's goal despite eight minutes of stoppage time and a disallowed effort from Potts four minutes into that time. Surely United had earned a draw?

Not quite. Thirty seconds left, a free kick from sub Alan Sheehan and United were beaten by a Potts header at the back post.

Cruel in the extreme.

The game was originally given all ticket status but after talks between the two clubs and the relevant safety teams it has been agreed that tickets can be sold on the night.

These are available in advance online at oufctickets.co.uk until 5pm on matchday or by calling 01865 337533.

They are also available to personal callers at the ticket office from 9.30m right up until kick off on Tuesday.

It's a big game for the U's: come and get behind the team as we welcome the Hatters

See a full preview with Karl Robinson in iFollow