TEAM NEWS
The U's are without the suspended Ahmed Kashi while loanees Jordan Graham and Samir Carruthers are not involved having been told they can return to the parent clubs last week.

Karl Robinson's big decision is whether to stick with youngster Nico Jones in defence after his debut last week or recall Rob Dickie alongside Curtis Nelson.  Jamie Mackie and Jerome Sinclair compete to start up front while another youngster, winger Kyran Lofthouse, is likely to be on the bench again.

It's a last game for coach Shaun Derry before he leaves for pastures new - see Shaun, Karl Robinson and Jamie Hanson previewing the game in iFollow right now.

THE OPPOSITION
Boss Mick Harford hands the reins over to his successor tomorrow with Graeme Jones taking over from Tuesday. Luton legend Harford admits that he will be emotional when he comes out of the tunnel before kick off on Saturday.

“The coaching staff have been taking the mickey out me, saying we’re fed up of hearing ‘there’s only one Mickey Harford’ and all that, the songs and the chants.
“But even thinking about it now sends a shiver down my spine, and I have a real good affinity with the football fans at Luton Town Football Club. I know they’ll get behind me, they’ll get behind the team on Saturday, and also when the incoming manager comes in, they’ll give him massive support and that’s good to know for everyone at the football club." 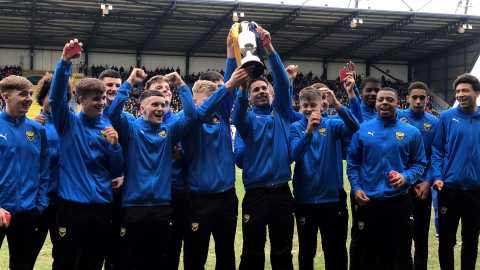 THE PLAYLIST
Want to get in the mood for the game? Then search for Oxford United Official on Spotify where we bring you a new playlist for every away journey, plus the dressing room playlist. The Playlist, usually compiled with the help of John Mousinho, is available on Saturday morning and is always flexible: let us know on Twitter if you have any more to add to help get the Yellow Army in the mood one last time...

It started at promoted Barnsley and ended at Champions Luton.

In between there have been highs and lows and some sparkling football, but today Oxford United were unable to ruin the party as Luton reached the Championship thanks to two goals from George Moncur and one from Elliot Lee. There were spills and thrills and a Luke Garbutt goal made it a nervous last game for the Hatters, but for once no late drama and United left to refelct on an excellent 12th place finish which they would certainly have settled for at Christmas.
The U's were up against it from just the third minute when Moncur fired the Hatters ahead. It looked a soft goal; a low but well-struck free kick round the wall and into the bottom right corner with Simon Eastwood guarding the other half of the net.
United hadn’t been in the Luton half at that stage but came back strongly and almost drew level when James Henry slipped Jamie Mackie in on goal after 11 minutes only for keeper James Shea to get down well to his right to push the United skipper’s low drive away.
Marcus Browne also tested the keeper with a decent effort on 32 but in between those chances Luton had gone close to extending their lead on three separate occasions. Moncur missed with a free kick from similar range to the opener and Eastwood made two saves - one excellent and one good - from James Collins within three 29th-minute seconds.
There was a routine save from Lee seven minutes into the second half but it was a short reprieve as within 40 seconds Lee had his revenge and Luton were almost Champions. Neat passing, ball worked across the face of the box and Lee's rising effort flew beyond Eastwood for 2-0 and party time.
The champagne was temporarily back in the fridge on the hour though when Browne hit the post and Garbutt gobbled up the rebound to score a well-taken goal and give the home fans something to cheer as well as change the soundtrack briefly from 'Champions' to 'Going Up'!
The game was wide open at that stage and Eastwood made two more outstanding saves before Browne forced Shea into a good block at the other end. However on 73 minutes the corks and straw hats were flying when Moncur snapped up a rebound and planted the ball beyond Eastwood to decide not just the game but also the destination of the League 1 Trophy, presented on the pitch after the game.
Fair play to Luton: the best team in the division and deserved winners on the day as well. But United battled hard and never gave up and will look back not so much on today but more over the last three months when they have been fantastic.
Enjoy the summer everyone. See you next season...
Att:10,089
Away:1,025
Report by Chris Williams, pictures by Steve Daniels and Darrell Fisher, stats by OPTA

All tickets for our final league game of the season at Kenilworth Road on Saturday have now been sold.

Unfortunately the  game will not be shown live on iFollow in the UK despite it being outside the '3pm Saturday' timeslot during which games are not allowed to be shown in this country. Both clubs received confirmation this morning from the EFL that the final round of games cannot be streamed, even if, as seems likely, the game is a sell out.

Full iFollow commentary from our friends at BBC Oxford will be available in the UK and overseas fans will be able to see the game as usual.