TEAM NEWS
United wait on the fitness of Cameron Brannagan and Marcus Browne after both limped off in the Checkatrade Trophy game at Bury last week. "One of them will be fine, the other will miss out" Karl Robinson told iFollow yesterday.

United, looking for back to back league wins for the first time this season, had a free weekend after that Bury game and after another week of training Samir Carruthers could be ready for his first start since the opening day at Barnsley - the on-loan midfielder played 45 minutes at Gigg Lane last week and scored his first Oxford goal.

Ahmed Kashi made his debut last week and competes with John Mousinho for the holding midfield role.

"It’s a difficult task for us" he said, "Oxford's last match they beat Portsmouth at their home, but we have prepared well for this game. For every team it’s the same, we can’t play every week really well. For the last weeks we have played very well though, we did everything well and only lost at Burnley. It’s important for teams with big goals that you win games like we had against Rochdale, we don’t worry now that it wasn’t the best game, we look at the three points which is important.”

"At the start of the season, we win 4-0 against Oxford which was a very good start for us, but I expect a difficult task on Tuesday, it is a different game.

“For us it’s really important how we can play. That was the message from the first day, our opinion is that if we play our style and our game, we can win every game in this league. We know that Oxford are difficult opposition, but we want to use our style to decide the game and the result. When we have a good day, we can win.” 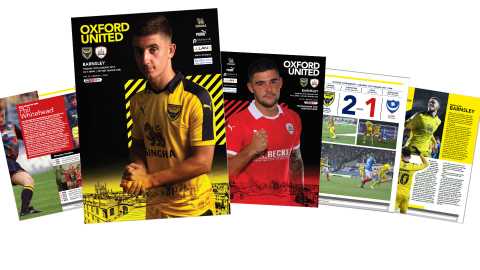 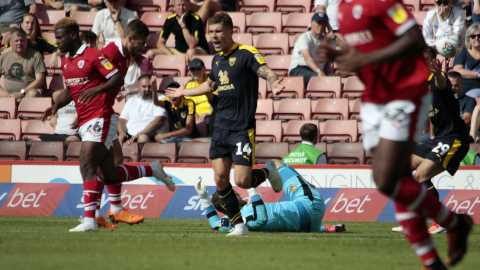 The gate behind the North Stand will NOT be in operation, meaning fans can transfer from one end of the ground to the other behind that stand. All car parks are open: we will tweet if/when the east car park is full.

Please note that the Family Room is not open this evening, and the Holiday Inn Express bar is currently being refurbished and is therefore also not open tonight.

The covers have been on the pitch and we will have one eye on the weather for you - the forecast is currently OK but @OUFCOfficial will have any news as it happens, as well as updates as required on this site.

Guest Of Honour
We are pleased to have former United defender Luke Foster with us tonight. Make Luke welcome.

Away Fans
If you are a Barnsley fan travelling to the game then a full Supporters Guide is available here: OUFCAwayDayInfo.pdf

iFollow is available with the full game LIVE to to see wherever you are.There will be reaction from the key men after the game, and you can follow all the action on Twitter at @OUFCOfficial and on this site with our OUFC Live coverage.

Oxford United were pegged back by Barnsley this evening as the Tykes came back from two goals down to take a point away from the Kassam Stadium. Goals from Josh Ruffels and the tireless Jamie Mackie had given the U's a 2-0 advantage but a goal from Mamadou Thiam and an equaliser from sub Kieffer Moore extended the visiting team's unbeaten run to nine games and left United to rue missed chances.

United, unchanged after beating leaders Portsmouth in their previous league game, outplayed the in-form team in the league throughout much of the game, and certainly for the first hour, a team that had put them to the sword on the opening day. The contrast between that baking August afternoon and this freezing January evening could not have been more marked, both in terms of the weather and the performance.

The U’s were admittedly grateful that Simon Eastwood was alert in the eighth minute to smother Cam McGeehan’s flick from close range, the first real effort of the game, but Gavin Whyte ran 40 yards with the ball and zipped in a cross that needed hacking away and Cameron Brannagan blasted in United’s first effort on goal soon after as the sides went at each other

With James Henry in a more advanced role, it asked a different set of questions of a Barnsley side unbeaten in eight matches and Whyte grazed the bar with a rising effort on 22 that keeper Adam Davies just did enough to divert onto the woodwork. Then came two corners in quick succession and the opening goal. The first was scrambled clear but Brannagan delivered the second as an outswinger towards the penalty spot which Dickie rose well and headed goalwards. Barnsley admired his work but Ruffels was rather more determined and got enough on a difficult dropping ball to force it past Davies for 1-0.

United were then inches from a second. The non-stop Mackie won the race with Davies and lofted the ball high into the sleet-speckled sky to leave the keeper stranded. Agonisingly the ball dropped on to the bar and bounced a foot the wrong side of the line. Henry won the race for the loose ball but couldn’t get it past the fast retreating Davies who was back on his line to make a save that atoned for his earlier dash outfield.

Dickie nodded just over as United dominated the half, although Eastwood came to the rescue again with a strong save from a low strike from dangerman McGeehan on 34 minutes and one time United target Liam Lindsay headed a golden chance over shortly before the break, just to remind United that they were in for a stern test in the second 45 minutes.

You know what? So were the Tykes. Another Brannagan corner and a thumping header from Curtis Nelson drew another fine save from Davies and then three minutes into the second half it was 2-0 and United were heading for that elusive back-to-back win sequence. Jamie Hanson, who improves game by game, thumped a long ball downfield, causing Lindsay to retreat and Davies to advance. The ball bounced in no man's land between them and just before it dropped into the keeper's gloves Mackie, never a man to give up a lost cause, stuck his boot in where it hurts and prised it free. A simple finish later, watched by the hapless defensive duo, and United were two goals clear and surely about to register back-to-back wins for the first time this season.

Jordan Graham has been hugely impressive since joining on loan from Wolves and forced Davies in to another good save on 56, topped by another fine save from the overworked keeper when Dickie smashed yet another header at him from the following corner. A mention at this stage for John Mousinho, who set the tone and did an outstanding job in midfield, winning countless challenges and immense in a superb team performance.

The Tykes are a good team though and even at 2-0 were still a constant threat. With 20 minutes left they were back in the fight when the dangerous Jacob Brown cut the ball back and Thiam swept it past Eastwood to make it 2-1 and ensure there were a few shredded nerves among the home fans.

United still went forward but with 11 minutes left Brown again paved the way as they got back on level terms. Lindsay launched the ball down the Tykes' left flank and Hanson tried to intercept but missed the ball, allowing the winger a free run forward. His low cross was met by Moore at the near post and United's lead was gone.

Eastwood kept the point in the bag with a good save from Brown during six minutes of added time but both teams went for the win instead of settling for the point, meaning a terrific game to watch despite the frustration of getting in to a great position and then ultimately having to settle for a point.

However, four points from successive games against Portsmouth and Barnsley? That will do as a hard-earned consolation and United edge out of the relegation places. They have shown over the last two weeks that they can live with the best in the division: see you next home game against Sunderland...