Oxford United look to continue their good form when they travel to Walsall on Saturday.

TEAM NEWS
The U's welcome back Gavin Whyte after a thigh strain picked up while on duty with Northern Ireland. Jerome Sinclair is also likely to be available after picking up a knock in the win over Wycombe last weekend and competes with Jamie Mackie for the striker role.

Sam Long also picked up a knock last week and Jamie Hanson stands by if required but the U's are hopeful that they will have a full squad to choose from other than Rob Hall, Jon Obika and Malachi Napa, who are all now out on the training pitches each day after long-term injuries, and Shandon Baptiste, who isn't too far behind them in his recovery from a knee problem.

THE OPPOSITION
Walsall’s form is a mirror image of United’s at the moment with four straight defeats, leaving Manager Dean Keates to call on the home fans for an extra effort tomorrow.

“The fans’ support, more than ever, is going to be needed over the next six games,” he said. “We need them for Oxford. We need to be united and we need to make sure we get what we need at the weekend so we can get out the relegation zone.” 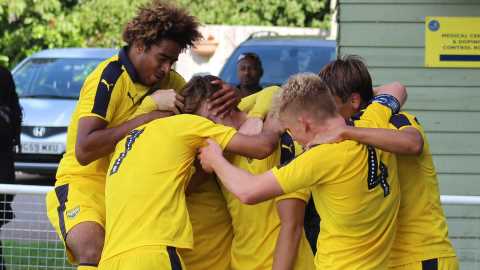 Tickets are no longer on sale online for this game but are available from 01865 337533 and in person from the OUFC ticket office until 3pm on Friday.

Family tickets can now be purchased from the OUFC Ticket Office

NB: family tickets only apply to parents/grandparents and their junior, not to siblings or friendship groups.

On the day of the game, family tickets will need to be purchased at the ticket office window at Walsall.

All other tickets on the day are CASH ONLY at the turnstile. PRICES INCREASE BY £2 ON MATCHDAY.

Wheelchair/Ambulant pay age-related price as above, with carer free of charge.

There is an away fans bar which opens at 1:00pm.

THE PLAYLIST
Want to get in the mood for the game? Then search for Oxford United Official on Spotify where we bring you a new playlist for every away journey, plus the dressing room playlist. The Playlist, usually compiled with the help of skipper John Mousinho, is available on Saturday morning and is always flexible: let us know on Twitter if you have any more to add to help get the Yellow Army in the mood on the motorway...

Oxford United's incredible run continued with yet another dramatic victory this afternoon as they all but guaranteed League 1 survival with a 3-1 win at Walsall. Goals from Rob Dickie, Luke Garbutt and Jerome Sinclair sealed a fourth straight win for Karl Robinson's team despite having to play half the game with ten men after Marcus Browne's red card in stoppage time at the end of the first half.

The preceding three wins on the spin had raised confidence to a season high and that showed in a one-sided first 20 minutes in which United looked extremely comfortable. Even before the opening goal Cameron Brannagan had three early efforts as he looked to join the front three from his midfield starting point, knowing that the excellent Ahmed Kashi was sitting behind and looking after the back four.

Garbutt tested home keeper Liam Roberts with a low drive that bounced just in front of his gloves before the opener came for (for the first time, and at that stage temporarily) ten-man United. The game was halted for a long time to allow Jamie Mackie to get treatment for a nasty looking cut after he collided with Roberts in a chase for the ball and in the delay United lined up a free kick wide on the right after Browne was tripped. With Mackie still on the sidelines adjusting a huge bandage, Walsall seemed distracted when Garbutt whipped in the ball to the back post and Dickie ghosted in to head home between Roberts and the left-hand post.

Sadly the lead didn’t last too long as Andy Cook stabbed the Saddlers level on 26 minutes with their first effort on goal. It wasn’t pretty: a long ball for Cook to chase and with Curtis Nelson seeming to have the situation under control as the ball ran towards Eastwood. Perhaps Eastwood could have come out, perhaps Nelson could have smashed the ball into the stands, but instead Cook battled his way in and earned himself a simple opportunity to slide the ball past the stranded keeper to make it 1-1.

Centre-half Jon Guthrie then lifted a presentable chance over the bar from close range two minutes later and Isaiah Osbourne headed a a half chance wide but United saw a wicked Brannagan cross flash just in front of both Browne and Garbutt and were always in the game, with the heroic Mackie’s bandaged head leading the way and lending him the look of a marauding second-row forward in permanent search of a ruck.

That ruck came during the seven minutes added time at the end of an often angry first half and resulted in United having to play half the game with ten men. Replays may prove otherwise but to my eyes it looked as though Browne went over the top of the ball to protect it and keep Zeli Ismail from tackling him. Unfortunately he caught Ismail on the ankle and ref David Webb saw it as a straight red card offence

Ten men? No problem. United adjusted shape to compensate for their deficiency and defended stoutly as Walsall sensed a win that would perhaps start a surge to safety, although the U's were grateful when Guthrie spooned a soft volley into the gloves of Eastwood with the first chance of the second half.

They never abandoned hope of winning the game either; Henry missed the target with a header after 56 minutes and then bravely charged down a clearance from the keeper with his face. The ball could have gone anywhere but flashed across the face of goal rather than into the empty net.

An increasingly bad-tempered game rumbled on with challenges flying in and the constant threat of another red card, but on 63 minutes it was the ten men who took the lead. Sam Long has had a tremendous second half of the season, shoring up the defence and giving his all in every game. This time he found the energy to galop forward and go round the left back to reach the by-line. His low cross found Garbutt who took a touch then gleefully thumped it beyond Roberts for yet another dramatic goal in this remarkable, memorable run of games.

There were mad scenes of celebration among the 1,462 away fans (1,459 by the time the game restarted) and now it was just a case of holding on. Eastwood was superb, Dickie and Nelson risked life and limb (mostly their own, although they weren't overly bothered), Brannagan buzzed around like a man possessed, and the introuduction of Gavin Whyte and Jerome Sinclair stretched the game and pushed the Saddlers back.

United were the last club in the division to register an away win but have now chalked up three at the most important stage of the whole season. To take 12 points out of 12 has been a fantastic effort from all involved and 52 points SHOULD be enough. And of course they still had to score in injury time; they always do. Ball over the top, Sinclair through and 3-1. Brilliant.

Cue chaos. Pay attention. Kashi had been subbed because he had already had a yellow card and was in danger of getting a second. Overjoyed by the goal he ran on to the pitch with Jordan Graham, who hadn't got on during the game. Both were booked. So Graham who hadn't got on was yellow carded when he got off for going on, while Kashi, who had gone off, was booked when he got back off again for going on again. So that's a second yellow, a red, and he won't get on at all next time. None of which really mattered.

Meanwhile back to the game. In all honesty there have been occasional moments when the end of the season couldn't come quick enough. Right now I never want it to end...

Ticket details for our away game at Walsall on Saturday are as follows.

Tickets are no longer on sale online for this game but are available from 01865 337533 and in person from the OUFC ticket office.

NB: Family tickets only apply to parents/grandparents and their junior, not to sibling or friendship groups.

On the day of the game, Family tickets will need to be purchased at the ticket office window at Walsall.

All other tickets on the day are CASH ONLY at the turnstile PRICES INCREASE BY £2 ON MATCHDAY.

Wheelchair/Ambulant pay age related price as above with carer free of charge.

There is an Away fans Bar which opens at 1:00pm