Oxford United look to get back to winning ways when they travel to AFC Wimbledon on Saturday. United won in dramatic style on their last visit to the capital at Charlton and will be hoping to build on a battling draw at Northampton last time out.

Last week's big freeze gave one or two players a chance to recover from knocks and bruises when the home game against Fleetwood Town was postponed.

United are still without long term absentees Rob Hall, Curtis Nelson and Joe Rothwell but Cameron Brannagan is in the squad once again and looking for his first action since arriving from Liverpool- the midfielder was an unused sub last time out in the 0-0 draw at Northampton.

Ivo Pekalski played 70 minutes in the Oxfordshire Senior Cup game at Oxford City on Tuesday but is unlikely to be involved as he continues his recovery from a knee injury while Gino van Kessel will be hoping to celebrate his birthday with a goal- the Curacao international turns 25 today.

THIS GAME IS ALL TICKET. Any tickets ordered in advance can be collected from the away turnstiles. 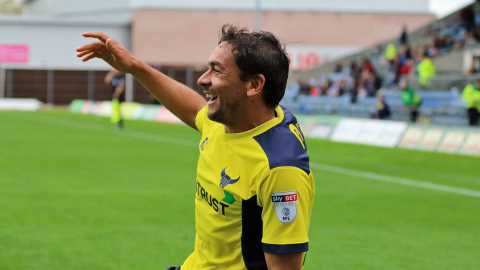 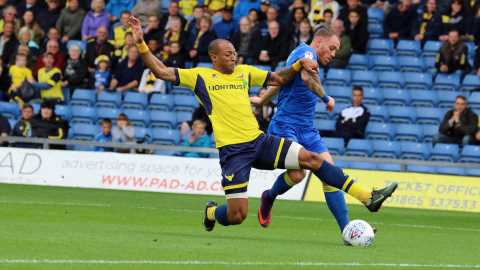 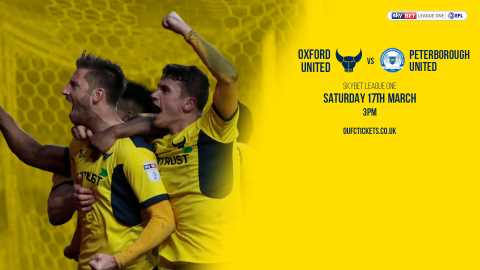 Oxford old boy Jon Meades came back to sink his former club this afternoon as the U's were beaten 2-1 at AFC Wimbledon. Trailing to a Lyle Taylor penalty, United drew level through Todd Kane before the break but were left with nothing to show for their efforts when Meades came off the bench to give the Dons all three points at Kingsmeadow.

United started the game well and signalled their intent immediately with Ryan Ledson drifting a shot just wide from the centre circle inside the first ten seconds and Isaac Buckley-Ricketts looping a header at goal in the second minute that Barry Fuller had to head clear on the line. Taylor had two speculative efforts and then one a lot closer after 15 minutes at the other end as the game settled into an open attractive end-to-end pattern.

The U’s looked full of invention at that stage, with Cameron Brannagan impressing on his debut in a midfield trio alongside Josh Ruffels and Ryan Ledson which offered flexibility and a rotating system that allowed any of them to join lone striker Jon Obika who held the ball well and led the line manfully for an hour. Ruffels saw an effort from the edge of the box after 23 go well wide and then whistled one over the top on the half hour before the game's first big moment saw a highly controversial penalty for the home side.

As the ball came in from the Wimbledon right Harry Forrester and Kane bumped into each other and Kane was sent sprawling. Forrester, stumbling, fell over the prone defender and ref Chris Sarginson saw it as a foul and pointed to the spot. Taylor sent Eastwood the wrong way with the spot kick and United were a goal down without doing a whole lot wrong.

They deserve huge credit for their reaction. Undeservedly a goal down, the U’s responded in the perfect fashion by levelling things quickly. Ledson started it with a challenge and ball through for Buckley-Ricketts who got his shot away despite two defenders converging on him. Keeper George Long, another player formerly with the U’s, spilled the ball when he should really have held on to it and Kane, now happily back on his feet and somehow six yards away from the opposition goal rather than at right back, nudged it into the empty net to make it 1-1. A reward for commitment, energy and determination from the very impressive right back.

Wimbledon made a double substitution at the break, perhaps indicating that boss Neal Ardley wasn't happy with their first-half efforts, and it was the subs from both sides who proved central to what happened next. United sub Wes Thomas had the chance to make it 2-1 when he raced on to a weak back header but scooped his shot too close to the relieved Long as the keeper came out to meet him. Had that gone in then who knows? But just a minute later it was Meades who came off the bench to haunt the U's.

The U's had arguably been on top but with 20 minutes to go were undone by a dead ball from the Wimbledon left from Taylor which sucked the entire defence underneath it. Meades, all alone at the back post, didn't catch his shot perfectly but it was hit firmly enough to flash across Eastwood and inside the far post for a 2-1 lead and a big three points for the Dons.

United tried to rally once again with plenty of effort and commitment in the closing stages, but passes went astray, shots were blocked and nothing quite went their way, leaving them to once again lick their wounds and try to regroup for a huge game against Peterborough next week.

There are still a handful of tickets available for United's game at Wimbledon this Saturday but fans are reminded that the game is ALL TICKET and none will be available on the day of the game.

THIS GAME IS ALL TICKET. We have been allocated 700 terrace tickets, 74 seats, and 2 wheelchair and carer tickets for the John Green stand behind the goal. Please note this allocation is slightly less than last season when we sold out.

Tickets are on sale to personal and telephone callers (01865 337533 and can be collected from the away turnstiles at Wimbledon on Saturday or from the OUFC Ticket office before 4.30pm on Friday.

Ambulant disabled fans pay the appropriate price for their age group and their carer is free of charge.